They’re staples in our halls and offices.  They bring tidings of good joy…and bills.  They are the wonderful Employees of our Distribution Services Team!  In non-SWA talk, they would be called “the crew from the mailroom,” but they mean way more to us than that.

These guys—and a gal!—deliver letters and parcels with smiles, know everyone at SWA Headquarters, and are the go-to gang for all our Culture-related events.  If we need a group of helping hands, our friends in Distribution Services always step up to the plate.

In any other office building, the mailroom folks probably walk the halls, barely speaking to their customers, picking up and dropping off the mail from their boring, run-of-the-mill mailcarts—not the case at Southwest Airlines.

Six months ago a new associate was added to the Distribution Services Team—Sam Leyendecker, who started his SWA Career as an Intern in Culture Activities.  Our Team would like to take all the credit for Sam being so immersed in our unique SWA Culture, but this kid was born with it.  (He was actually born in to it, his mom is a Southwest Retiree!).  Sam hadn’t been in Distribution Services a full month before he started his pet project; one that we LUVingly refer to as “Pimp My Mailcart.”

Sam planned carts based on the personalities and hobbies of his Teammates. He wouldn’t tell anyone whose cart would be “pimped” or when, so it was always a surprise when they got to work in the morning and discovered their new ride. 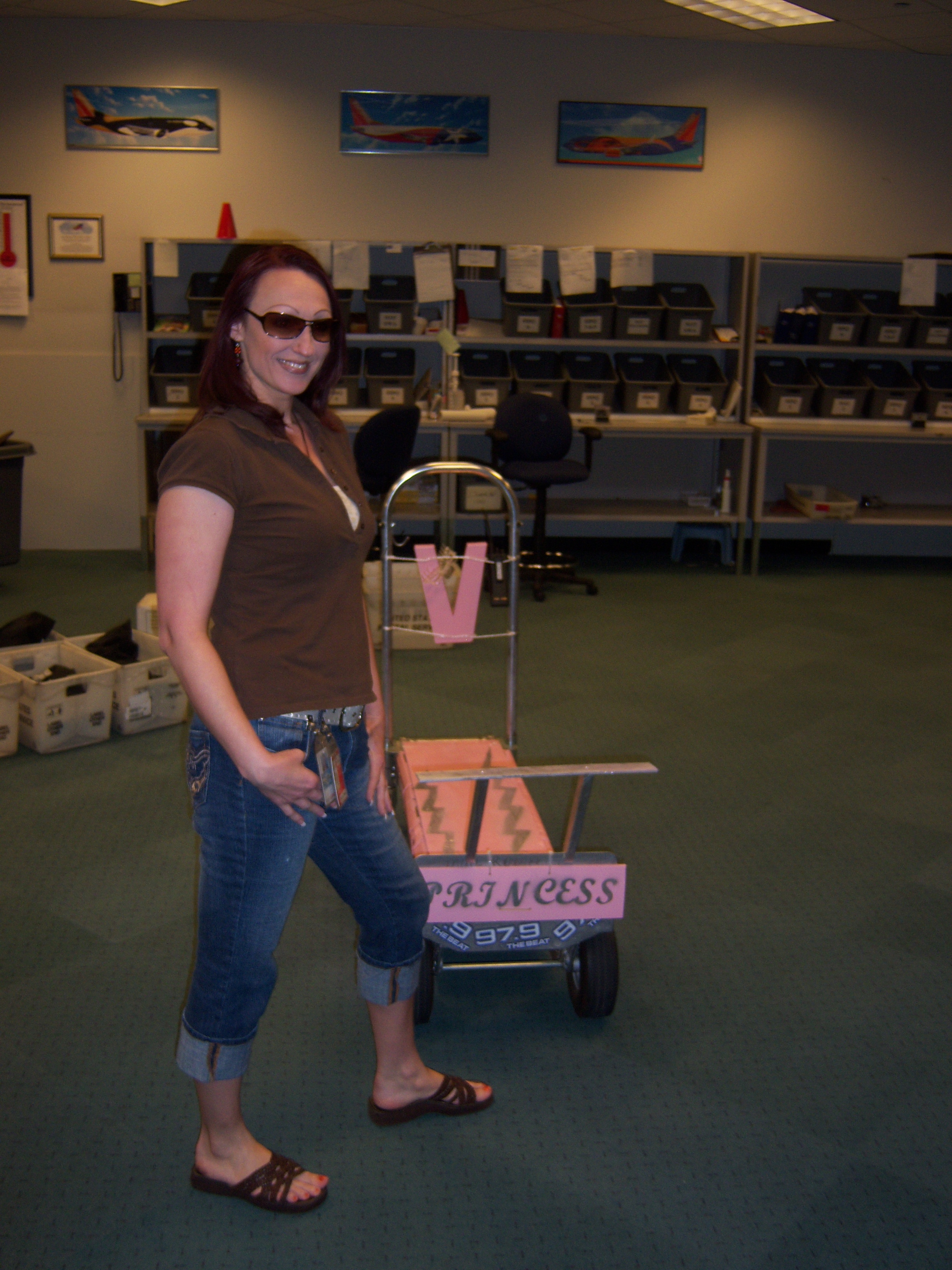 Valesca, the only girl in the crew, was the first lucky victim.  Sam planned a pink princess cart for the princess of Distribution Services.  In no time, “V” was rolling around the halls in style and everyone was patiently waiting for Sam’s next creation. 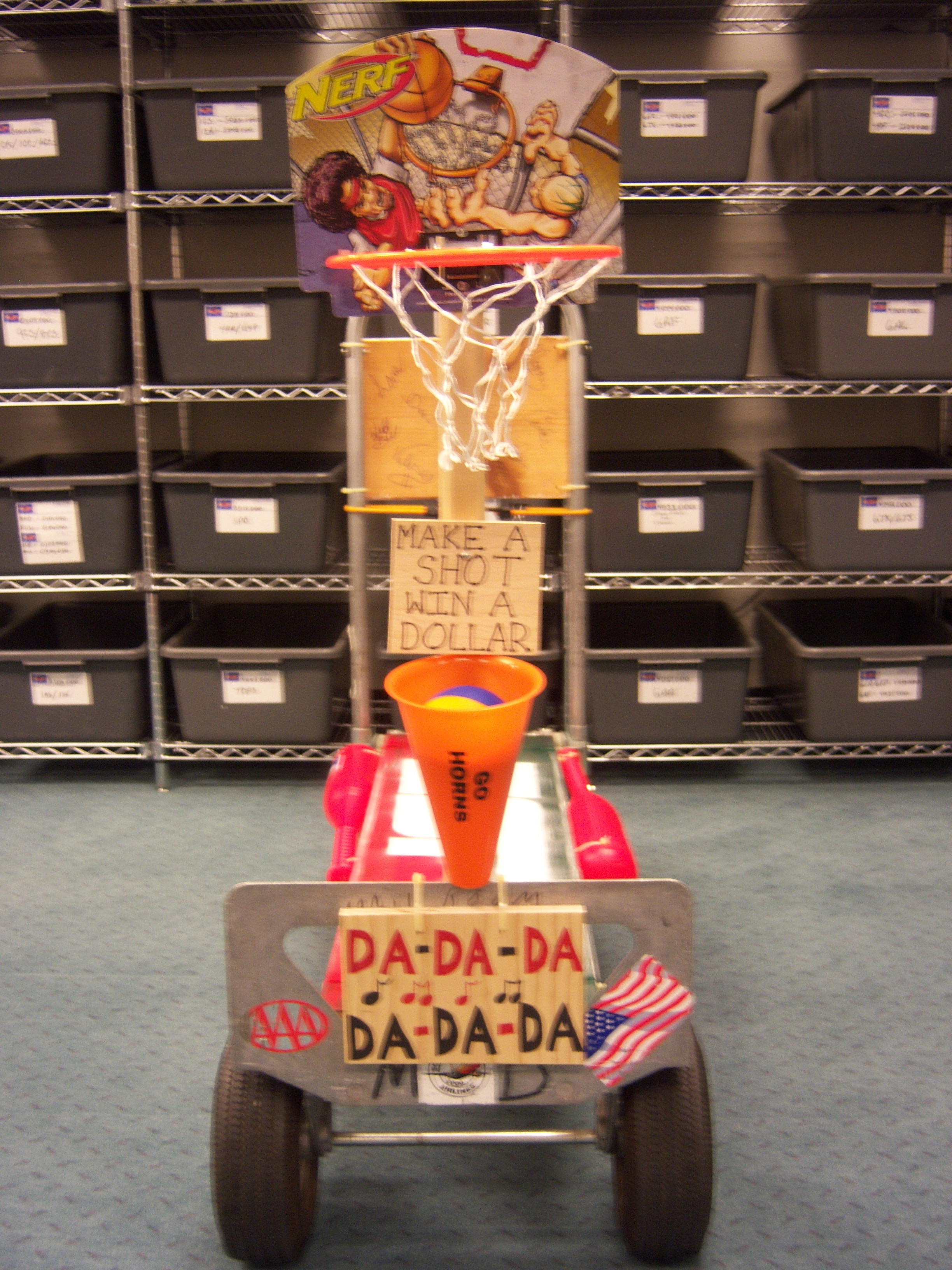 Since sports talk is what he loves best, Mat’s cart is a full-on ESPN mobile, complete with a basketball hoop with a sign that promised a dollar to anyone who could make the shot.  (*Mat finally had to take the hoop off—he couldn’t afford to keep giving out dollar bills!)

Manny’s car was actually planned first, but it was such a big production it had to be done a little later down the line.  Manny is our original “lowrider”, and his cart is absolutely perfect—complete with engine sounds and a Cadillac emblem!

Being such an aficionado of our airplanes, there was no question how Don’s cart would be decorated.  Sam, with the help of some of his Coworkers, designed Don’s own mailcart plane, with the paint scheme of SWA’s SPIRIT One.  This one would be called “Don One”—say it out loud, you know what it sounds like—yep, Don Juan, so this plane had a little extra flair!

You’d think he would be worn out by now, but you don’t know Sam.  There were many more carts to design: Alan had just given up drinking Dr. Pepper, so of course he needed a constant reminder in the form of his cart being designed to look like a Dr. Pepper can; “Wild” Bill’s smaller cart looks like a Texas twister and is full of color; and there’s no mistaking who the “Three Stooges” cart belongs to- Ced, Jay, and, David (they share a cart)!

People wait for these pimped-out carts to round the corner carrying the mail, but everyone wondered—why wasn’t Sam’s cart done?  In no time, the Distribution Services gang got Sam, and they got him good.  Sam is a huge Oklahoma football fan, so he was thrilled to come to work one day and see his very own “Boomer Sooner”—he can even sit inside it!

If we let Sam loose too long, who knows what he might decide to “pimp” next…watch your car, Gary!

joedal
Not applicable
This is a great story! Congrats to Sam! As much of an airline that you guys are, you're 10 times more of a family, and really care about each other in your company. I laughed out loud a few times during this story, love the different "rides", it would be great to see a slide show of all of the pimped out carts!

jazzyspreetsing
Not applicable
this is awesome! we did something like this at my school a few weeks ago, we used grocery carts and decorated them, and then we displayed them, and people gave money to the cart they liked the best, and whoevers' cart made the most money got to decide which charity the money went to. "Either think and act big and grow smaller, or think and act small and grow bigger."-Herb Kelleher
46 Loves

Cynthia_Hackler
Not applicable
Sam, we are so lucky to have you deliver our mail....and always with a great, big smile!! You bring a happy (Southwest) spirit to the day! Cynthia Hackler
49 Loves