Last November during Military Heroes Month, Southwest Customers and Employees wrote their heartfelt thanks on more than 1,000 postcards provided by Southwest in airports from Seattle to Ft. Lauderdale, which were then sent to military bases across the U.S. and distributed to Troops awaiting deployment.

This was the second year that Southwest and A Million Thanks joined hands with the postcard campaign to send cards with notes of thanks, veteran’s memories, and even lipstick kisses!

Since a picture is worth a thousand words, below are some photos of United States Marines, stationed at Camp Pendleton in California, awaiting deployment to Afghanistan with their Southwest Airlines postcards from home in their hands. 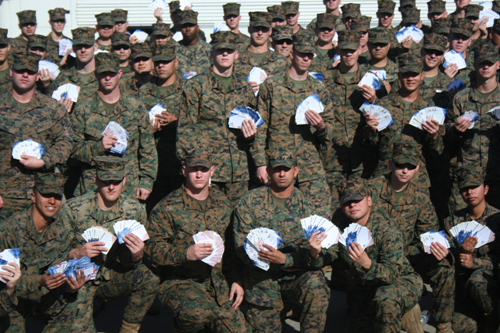 We are honored to join with Companies like A Million Thanks and The Mission Continues to let our troops know how much we appreciate their service to our country and all they do to protect our Freedom. To learn more about A Million Thanks, visit www.amillionthanks.org.