Q&A: Which Type of Southwest Aircraft is This? 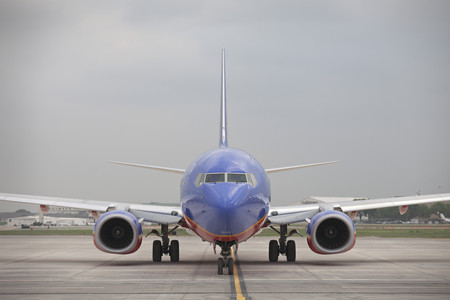 Our Q&A blog series answers common questions about aviation and Southwest Airlines.  Our next question about our Fleet is answered by Editorial Team Intern Erin Boren.  Have a question of your own?  Leave us a comment! At Southwest we believe in variety: Peanuts or pretzels?  Aisle or window seat?  Gray or red Flap-track fairings?  Wait—what are fairings? I’ve been traveling my whole life, but there is plenty I still don’t know about the aviation industry.  For example, what are fairings?  And for that matter, how can you tell the Southwest planes apart?  There are more than 600 red-bellied Boeing jets split between five different categories, so it definitely takes a keen eye to notice their differences.  Thankfully, Richard West, Southwest’s Corporate Historian, has enlightened me, so now I can enlighten you! Our 737-300 series aircraft can hold either 137 or 143 seats and may or may not have Blended Winglets (the vertical end on each wing).  They’ll have gray fairings (the canoe-shaped attachments on each wing), and as you’re looking out from the gate area windows, you’ll notice 12 windows back from the cockpit there’s a gap.  Fun fact: The gap is a space left for air conditioning duct work.  The duct work funnels air from the AC units (which we affectionately refer to as “Herb’s Stills” because of their appearance) located underneath the cabin to the overhead air vents.  Our 737-500 series also has gray fairings, but holds 122 seats, doesn’t have winglets, and there are eight windows before the gap on these planes. Our 737-700 series hold 143 seats with 11 windows before the gap.  These planes have winglets and have red fairings.  Similarly, our 737-800 series also has winglets and red fairings, and some -800 planes now have the newest Split Scimitar Winglets.  The -800s are our largest planes, which hold 175 seats and have 12 windows before the gap—notice the double-emergency exit doors over the wings. What’s that hump toward the back of the plane?  That’s the wi-fi dome, which you’ll find on both our -700 and -800 series aircraft.  These planes are also a little bit taller than our -300s and -500s.

Can you guess this aircraft's type? It's a little tricky! This is a rendering of a -700 series aircraft, but it doesn't have winglets. In 2003 we began retrofitting the -700s in our existing fleet with winglets to save on fuel costs. It's also missing one more thing... can you tell? Leave us your answer in the comments!
Lastly, each of our planes has a specific tail number—these act like social security numbers in that no other plane in the world will share this (crazy, huh?).  You can tell the aircraft series by these numbers.  For example, -300s are numbers 300-399 and 600-699, and -500s are 501-549.  But I’ll let Richard tell you all about tail numbers… Happy flying!
4 Loves
2 Comments