At the end of this video, I handed Michael, our current video intern, a present on behalf of his Secret Santa.
Since it's Friday, when we reveal ourselves, I'm taking the liberty of coming clean on the blog:
Dear Michael,
I'm your Secret Santa.  I know you didn't ask for donuts, but I gave them to you anyway. The look on your face was one of perplexity, and for good reason. Like when I was a youngster and asked for a Sega Genesis, but was instead given a toy train. Know this, though, Michael: I didn't realize it at the time, but that train had legs. Up until college, we set it up every Christmas. I'm currently rocking a new video game system. So you see, Michael, the donuts may have a lasting affect on you.
And you've had a lasting affect on us.  I know we're entering your last week as an intern, and you have a big road trip ahead of you.  I learned this from your Secret Santa form. So, I've decided to provide for you a care package to get you through the most dire points of your voyage, followed by a celebratory treat for the end (Michael's of age, everyone). 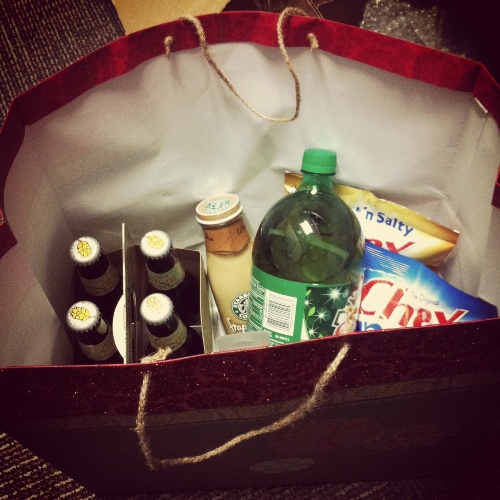 If this doesn't please you, I'm a colossal failure.
Sincerely,
Brooks
I think he'll like it. Onward, though, to our top five:
Think you and your sweetheart got a good thing going?  Then obviously you haven't met Harold & Edna.  Read about their recent trip to Vegas to celebrate eighty years of holy matrimony!
Do you have a Southwest story?  Want to share it with us?  Read this post to find out how you can do so, and potentially make it on television!
Two World War II veterans were honored on the SWA Stew.  One here, and another here.  By the way, are you wearing red every Friday?
Finally, Resident Historian Brian Lusk has a look at the Interchange Era.
1,622 Loves