What do you get when you pair a popular recording group, a plane full of Southwest Customers, and an altitude of 35,000 feet? A Live in the Vineyard (LITV) inspired ‘Surprise and Delight’ flight! That’s right, Southwest teamed up with Aloft Hotel Presents Live in the Vineyard and recording artists SafetySuit to provide our Customers with some inflight entertainment, and I was there to witness it all. The band, which played to a sold out aircraft, performed two songs from Denver to Kansas City. During the performance, Passengers whipped out mobile phones and tablets to record the band’s short set. Doug, lead vocalist for SafetySuit, encouraged the Passengers to tweet pictures and video from the performance…and that’s what they did! As Customers left the aircraft, many congratulated the band (and also offered up their thanks). Our Flight Attendants even jumped in on the action by posing for a photo with the band in Kansas City. 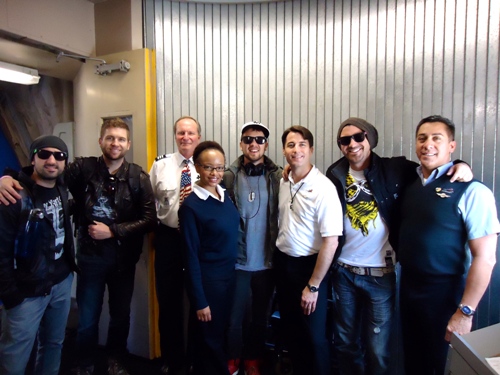 SafetySuit not only performed inflight, but also gave an intimate performance at the Southwest Porch at Skyline Park in Denver the previous day. Southwest Employees, friends of LITV, and eager fans came out to the porch to enjoy Napa Valley wine provided by Beringer, appetizers, good company, and of course, SafetySuit. After the performance, the band mingled with the crowd and took pictures with adoring fans. If this party is a precursor to LITV in Napa, then the actual event will be the ultimate experience in indulgence.

Be sure to check out the videos of SafetySuit jammin’ in the friendly skies.