dishtrip
Not applicable
Our resident foodies from Dish Trip headed to the coffee capitol of the world—Seattle—for this special edition feature taking them on the quest to taste the best coffees in the city.  And, if you’re like me, when I’m traveling on Southwest, I always take advantage of having a yummy cup or two of our specially brewed LIFT coffee.  Grab a cup, and read on to find the best brews in Emerald City. 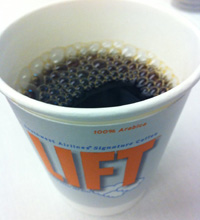 If you fly Southwest Airlines often, you probably know that they serve their own brand of coffee called LIFT. This isn’t your typical airline coffee. Southwest Airlines has gone to great lengths to provide its caffeine-guzzling passengers with a tasty blend of rich, dark-roasted, 100 percent Arabica blend of South and Central America coffees. The fact that an airline cares this much about the quality of hot brew they serve their passengers inspired us to see what wonderful coffees we could find at one of their destinations. So, we booked a Dish Trip to Seattle to see what they’ve been brewin’.

Seattle is not only home to the international coffee giant Starbucks, but the city is also home to many other independent coffee roasters and producers. In addition to touring the city and filling up on local eats, we consulted with local coffee guru Nathan Slabaugh to get the scoop on the best coffees in the city. Here’s what Nathan had to say about Seattle coffee:

Seattle coffee …it's like saying Philly cheesesteak, or Chicago pizza, or even Kentucky bourbon. So, when people think Seattle, the next thought that flows through their brain is usually coffee—Immediately followed by the word Starbucks. So, if you only have a few hours to spend in the Emerald City, here's a quick guide to getting completely coffee-faced in the shortest amount of time by drinking the best stuff in town. 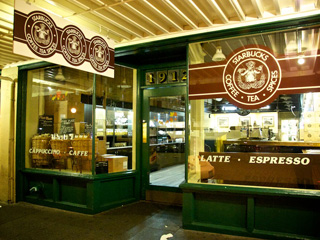 Starbucks. Ok, everybody knows this name, even people in most Chinese cities. It is one of the truly iconic American brands of the last two decades. In our very American way, we took something Italian, put an American spin on it and exported it to the world.  Although the quality of the brew in the cup isn't what it was in their early days, it does still warrant a visit to where it all began—kind of like visiting Shakespeare's birth place. It's a humble building, and yet what was fostered there changed the world forever. The storefront in Pike Place market has the original logo and wooden floors with wafts of the flower vendors’ wares blowing through the door. It makes for a nice early morning stroll; buy a latte and wander through the paella of vendors, but beware of flying fish! 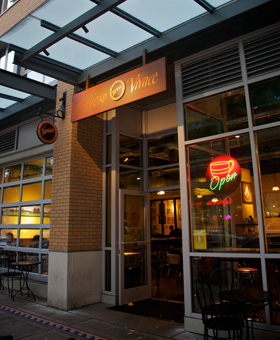 Espresso Vivace.  Part of the American coffee revolution and a Seattle staple for more than 20 years, Espresso Vivace is unique and arguably one of the best Italian-style cafes in the USA. Founded by David Schomer, his two cafes and sidewalk bar embody his personality, attention to detail, and love for art. All of these factors show up in the cup and are what make his shops not just cafes, but destinations (that, and the beautiful murals painted with espresso!). 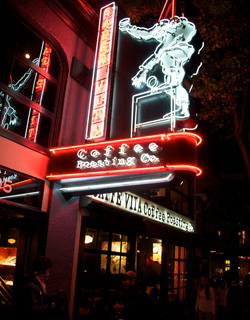 Caffe Vita. For a jaw-dropping shot of espresso in a setting with a distinctly Seattle vibe, visit Caffe Vita. With several cafes around the Northwest, they roast their own and are serious about seriously good coffee.  Not only do they source quality coffee, but they personally know and visit the farmers of their roasted coffee. Their coffee is one of the few Seattle micro-roasters that I have seen in other high-end cafes around the country, and if you stop by to taste their brews, you'll know why! 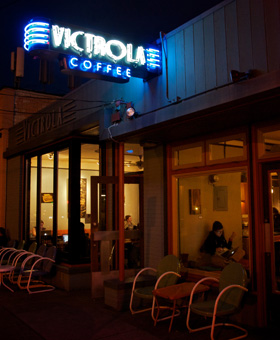 Victrola.  Ahhh Victrola, driven by design and fueled by passionate baristas, their cafes each have a personality of their own. Named after the famed music machine of the 1920s, they offer aesthetically pleasing surroundings in which to enjoy your finely crafted coffee beverage.  Victrola isn't just serious about your environment, but also about the quality of your bean knowledge, too. They roast their own and offer public weekly cuppings (kind of like wine tasting, but without the embarrassing drunken outbursts from strangers) that will have you tasting the difference between Central American and African grown coffees in no time. So, being a purveyor of "ah-ha" moments fostered by competition-level baristas makes this a Seattle coffee experience not to be missed.

And there you have it, enough high-end coffee to have you lively chatting away nonstop with your airplane seat neighbor at least to Chicago Midway Airport. There is a lot of coffee in Seattle, but very few cafes make you want to marry the barista that made your coffee. This short list will leave you with beloved memories, but more importantly it gives you four really good reasons to hop on a Southwest Airlines plane tomorrow and visit Seattle for the first time or for a repeat stop. Avanti!

Don’t forget to follow us on Twitter @dishtrip or friend Dish Trip on Facebook for more dining details in a city near you.  Thanks for reading—we’ll see you on the next Dish Trip!

Dish Tip for a Dish Trip? Do you have a favorite city or coffee roaster that we should know about?  Share with us in the comments below.  And, perhaps we can take a Dish Trip to your favorite coffee spot!
169 Loves
2 Comments