DALLAS, Dec. 13, 2011 – Southwest Airlines is once again leading the industry by teaming up with its longtime partner to become the launch Customer of Boeing's new 737 MAX aircraft. Southwest is the first Customer to place firm orders for the new, more fuel-efficient 737 MAX, and the Company also will become the first airline to accept delivery of the new aircraft in 2017. As the launch Customer of the 737 MAX, Southwest extends its legacy with Boeing as the 737 launch Customer for the -300, -500, and -700. The 737 MAX is the new-engine variant of the world's best-selling airplane, building on the strengths of today's Next-Generation 737 (737NG) technology, and is powered by CFM International LEAP-1B engines. For more information, visit: www.swamedia.com.

In its ongoing effort to improve fuel efficiency while extending its record of unparalleled Customer Service and profitability in the airline industry, Southwest has placed a firm order for 150 Boeing 737 MAX airplanes, with the first delivery scheduled in 2017. The Company also expanded its current order book with Boeing for 58 additional 737NG aircraft. These new orders join an existing firm order book of 142, bringing Southwest's total firm orders with the Boeing Company to 350 for 2012 through 2022, which are intended to predominately serve as replacement aircraft as the airline continues the modernization of its fleet.

"Today's environment demands that we become more fuel-efficient and environmentally friendly, and as the launch Customer of the Boeing 737 MAX, we have accomplished both," said Gary Kelly, Southwest Airlines Chairman, President, and CEO. "We are teaming up with our friends from Boeing to lead the industry in a way that makes both our Shareholders and our Customers proud to associate with Southwest Airlines. Today's announcement will allow us to maintain our position as a low-cost provider in the years ahead."

"We are enthusiastic about our fleet modernization plans, and especially about becoming the launch Customer for the Boeing 737 MAX," said Mike Van de Ven, Southwest Airlines Executive Vice President and Chief Operating Officer. "The much improved fuel efficiency of the 737 MAX will enable us to improve our fuel costs, as well as our environmental performance, with great comfort and reliability to offer to our Customers."

Van de Ven continued, "Overall, we expect the superior economics of our fleet modernization plan to meet our 15 percent pretax return requirement and provide substantial flexibility to manage our growth in a variety of economic conditions over the next decade. Additionally, these new aircraft will enhance the Customer Service offering with the new Sky Interior."

The 737 MAX with LEAP-1B engines will reduce fuel burn and CO2 emissions by an additional 10-11 percent over today's most fuel-efficient single-aisle airplane. It will have the lowest operating costs in the single-aisle segment with a seven percent advantage over its competition.

The 58 new 737NG firm orders include the exercise of 25 previously existing options. The Company has substituted -800s for all -700 737NG deliveries scheduled for 2012 and 2013 in addition to a portion of its 2014 deliveries. For the 737 MAX order, the Company has flexibility to accept MAX 7 or MAX 8 deliveries. The revised order book also includes 78 737NG options and 150 737 MAX options, bringing

total option positions from 2014 through 2027 to 242. Additional information regarding the Company's 737 future delivery schedule is included as an accompanying table.

Southwest Airlines will present the key benefits of today's announcement at a live press conference today from Southwest Airlines Headquarters in Dallas, Texas, at 9 a.m. Central Standard time (10 a.m. EST). A live broadcast and replay of the conference will be available at http://www.videonewswire.com/event.asp?id=84090. Presentation materials from the press conference will be made available at www.southwest.investorroom.com and www.swamedia.com.

In its 40th year of service, Southwest Airlines continues to differentiate itself from other low-fare carriers--offering a reliable product with exemplary Customer Service. Southwest Airlines is the nation's largest carrier in terms of originating domestic passengers boarded. Southwest serves 72 cities in 37 states and is one of the most honored airlines in the world known for its commitment to the triple bottom line of Performance, People, and Planet. To read more about how Southwest is doing its part to be a good citizen, visit southwest.com/cares to read the Southwest Airlines One Report(TM). Based in Dallas, Southwest currently operates more than 3,400 flights a day and has more than 37,000 Employees systemwide. Earlier this year, Southwest Airlines completed the acquisition of AirTran Holdings, Inc., and now operates AirTran Airways as a wholly-owned subsidiary. AirTran serves 63 cities in 30 states and currently operates more than 790 flights a day. Additionally, AirTran serves seven international destinations in the Caribbean and Mexico. AirTran employs more than 8,500 Employees across the country.

This news release contains forward-looking statements within the meaning of Section 27A of the Securities Act of 1933 and Section 21E of the Securities Exchange Act of 1934. Specific forward-looking statements relate to Southwest's fleet plans and expectations, including without limitation (i) the anticipated timing of the introduction of the Boeing 737 MAX aircraft to Southwest's fleet, (ii) the anticipated benefits of the Boeing 737 MAX and Next-Generation 737 aircraft to Southwest and its Customers, and (iii) the anticipated environmental benefits of the Boeing 737 MAX. These forward- looking statements are based on Southwest's current intent, expectations, and projections and are not guarantees of future performance. These statements involve risks, uncertainties, assumptions, and other factors that are difficult to predict and that could cause actual results to vary materially from those expressed in or indicated by them. Factors include, among others, (i) Southwest's dependence on Boeing, as well as Southwest's and Boeing's dependence on third-party providers, to perform in accordance with expectations in connection with the manufacture and delivery of aircraft; (ii) the impact of fuel prices, economic conditions, consumer demand, and other factors on the Company's overall business plan and strategies; (iii) the impact of governmental regulations on the airline industry and related industries, and (iv) other factors, as described in the Company's filings with the Securities and Exchange Commission, including the detailed factors discussed under the heading "Risk Factors" in the Company's Annual Report on Form 10-K for the fiscal year ended December 31, 2010. 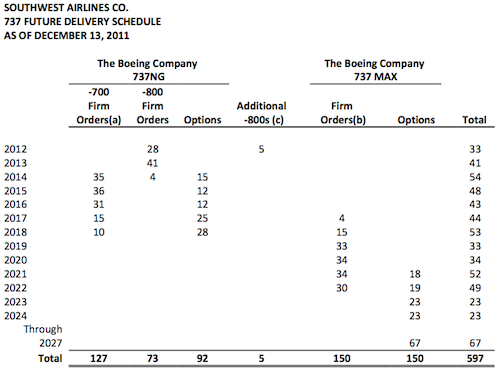