Southwest Stays True to Its "Rep"

Southwest Airlines is often regarded as one of the best companies to work for in America. In 2007, we received over 300,000 applications, and hired less than 5,000 of the best. This competitive hiring process is only one of the reasons I feel so lucky to have been hired on with the Graphic Design & Creative Services Department in late 2008.

I’ve always been a fan of Southwest, and I am intrigued by the story of the Company’s origin and early struggles. I’d heard rumors of a crazy former CEO, happy Employees, and great parties. At orientation, I learned about the Servant’s Heart, Warrior Spirit, and Fun-LUVing attitude that all of us are supposed to embrace. Being the skeptic that I am, I thought to myself that there is no way a Company this large could expect all of its Employees to live up to these values.

Every day I am amazed at the kind hearts of my Coworkers and the countless ways that are found to keep our jobs fun--from office Olympics and picnics on the floor, to Team parties and outings (and I haven’t had a chance to attend a Spirit Party yet). I’m sure that when my Team reads this they will say to one another, “Boy, is she ever drinking the Kool-Aid,” but let them talk. From someone who never thought she’d enjoy working for a living: I LOVE my job!

Before working here, I knew Southwest for its humorous ads and great Customer Service. Every time Southwest flies to a new city, fare wars are waged as the competition is forced to lower prices to remain in the picture. I’ve been told this is known as the “Southwest Effect” and am excited for the chance to experience it for myself when service begins to Minneapolis-St. Paul (MSP) next month.

Southwest’s Graphic Design & Creative Services Department never passes up an opportunity for a good-spirited competition, so when the Public Relations. Team enlisted the help of GD&CS to create some collateral to celebrate the opening of MSP, we not only agreed to help, but decided to make it into a contest. The “When LUV Comes to Town” Design-Off was born!

The chosen design will be placed on T-shirts, posters, and other collateral that will be given away at the city's opening. Each designer was eager to have their chance at creating the winning artwork. (What Designer doesn’t want to see their stuff displayed on a T-shirt?) As added incentive, a seat on the inaugural flight into MSP will be guaranteed for the winning Designer, and from what I hear, inaugural flights are not something to miss.

Armed only with the slogan, “When LUV Comes To Town”, each of us had a few days to mock up a design. At the first critique, I realized the competition was stiff. I work with some very talented people! The best part is that even if I don’t end up winning this Design-Off, I know there will be plenty of fun-filled opportunities in the future, as long as Southwest continues to promote its values and stay true to its Fun-LUVing reputation!

Take a look at some of our solutions below, and see if you can guess the winner! (Which design would you chose?) 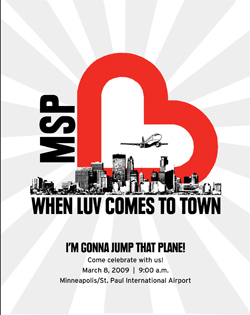 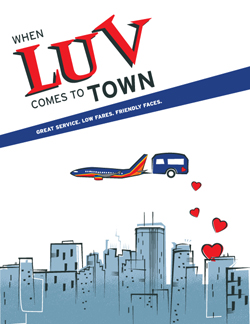 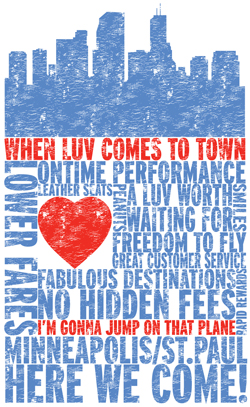 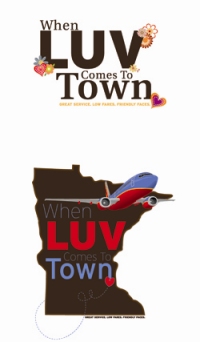 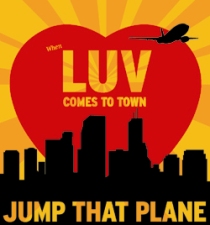