Traveling in the name of food is what we do at DishTrip, but we additionally love traveling in order to tackle new brews across state lines.  So, when we caught wind that Beer Advocate was hosting their 4th Annual American Craft Beer Festival inside Boston's Seaport World Trade Center in June, we couldn't deny speeding from Philadelphia to Boston to slurp our way through over 106 breweries and all of their offered beers.

DishTrip's Ryan Hudak and myself, Amy Strauss (both of us being extreme beer fanatics) happened to be the go-to food ambassadors for this beer-infused trek. Continue reading below as Hudak offers you his elaborate recap of the sudsy fest while I relay the weekend's best eats.

With two of the biggest craft breweries in the country, Harpoon and Boston Beer Co., calling Boston home, it’s no surprise that Boston Beer Week would be a big deal. It’s also no surprise that the end of the 10-day affair would need a blowout event, something to conclude the week with a bang. 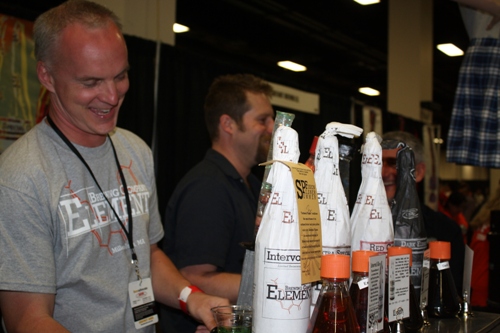 Enter fellow Boston natives BeerAdvocate, one of the most well-respected beer websites on the Internet, who teamed with Harpoon at the Seaport World Trade Center for the fourth year of the American Craft Beer Fest, the largest beer festival on the East Coast.

The American Craft Beer Fest, which spans three 3.5-hour sessions over two days, boasts over 100 breweries and 400 beers for the 5,000+ attendees to sample. Anchored by well-known breweries like Boston Beer Co. and Harpoon, Dogfish Head and Rogue, the fest also featured a wide array of smaller breweries, especially from the New England area, which is a boon to any out-of-towner trying to experience a variety of local brews in a single go.

And variety is certainly the key word to describe the beer fest. Despite being the beginning of the summer beer season, which usually finds lighter, crisper, more refreshing beers on offer, the breweries brought out everything from pilsners to imperial stouts, schwarzbier to barleywine. Though the summer beers—IPAs, saisons, pale ales—were the most prevalent, a quick scan over the festival’s guide book would find you anything and everything in between from at least one brewer.

I was immediately drawn to Goose Island’s set-up and the promise of their Bourbon County Brand Vanilla Stout. The Matilda, a favorite, went over well too, as did the wild ale Lolita and the saison Sofie, named after Goose Island founder John Hall’s granddaughter. Afterwards, a brief talk with Hall started our festival on the right foot.

Element Brewing Company from Millers Falls, MA's black ale was malty and delicious, and a notable part of the festival. Another standout of theirs was the Summer Fusion Pilsner, which was light and refreshing after so many big or dark beers. 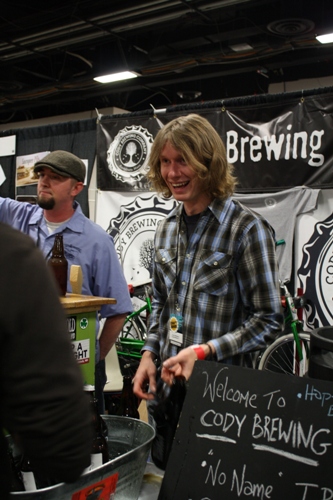 Better yet, Cody Brewing Company from Amesbury, MA was one of the highlights of the night. I was lucky to get a rare sample of their Carrot Cake Stout that carried a rich, spicy scent with the flavor to match. And so it goes with every festival—everyone finds something to love and something to hate. Try things you’ve never tried before so you know what to look for the next time you go beer shopping.

For any beer fan planning a trip to Boston during the summer, the American Craft Beer Fest is a must. With direct flights from major cities and easy connections, Southwest can get you to Beantown in a snap, ensuring you get to enjoy each and every pour. 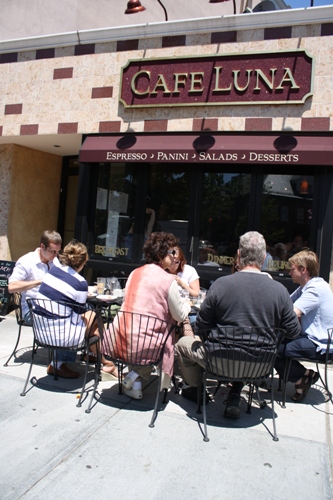 It was a smart decision on our parts to indulge in gluttony of all its glory in preparation for our beer fest later in the day. Cafe Luna is a go-to spot for Cambridge students to snag weekend brunch, and after a wide sampling of S'mores and Banana Split French Toast, Lemon Curd Topped Berry Waffles, Surf and Turf Eggs Benedict, and their signature “Everything But the Kitchen Sick” breakfast meat platter, we know why! But if you go, don't skip the sake-swirled Bloody Marys—you'll be addicted. 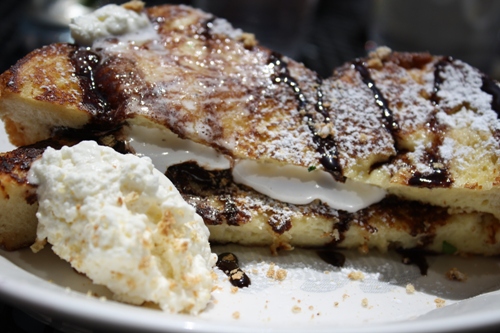 A few blocks away from brunch (we had to walk off our late-morn' feast), we stumbled upon this attractive brewery, which is found in the well-known, restaurant-heavy Kendall Square. Only popping in for a tasting of all their craft beers on tap, I left a fan of their solid seasonal selections, including the Grisette-styled saison and the Bavarian-styled Weizenbier.

As a perfect place to grub post-beer fest, Hillstone (part of the famous Houston's restaurant corp.) offers alluring eats like fresh sushi samplers and perfectly-greasy ground chuck cheeseburgers on toasted egg buns. Our gang opted for all of the above, and then some—which included a fine Thai steak and noodle salad with mango and avocado. 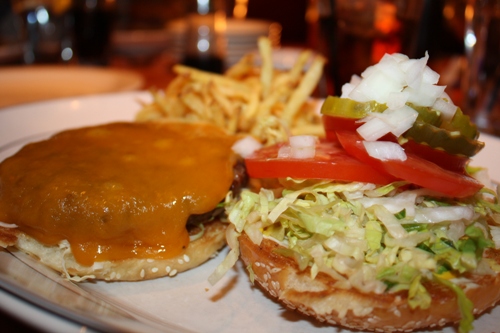 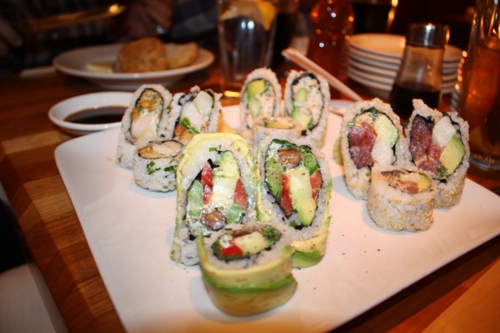 As a constant repeat winner for best breakfast and brunch of the academic area of Northampton, MA, Sylvester's paired top-notch espressos, amongst sweet tooth picks like Cinnamon Bun French Toast and satisfying savory bites like omelets with ham, apple and goat cheese and Huevos Rancheros. Better yet, they always celebrate the area's best, proudly stocking all local producers, farmers and cheesemakers' goods.

In a cozy cottage on a side street near Smith College you'll spot this old-world sourdough bread bakery that constantly churns out old-fashioned, ashy loaves aside vegan baked goods and just-packed bags of granola. I am obsessed with the olive and semolina fougasse that's chewy, crunchy, and with the perfect hint of onion. If you go, ask for a peek into their brick oven. The bread baking is a gorgeous sight! 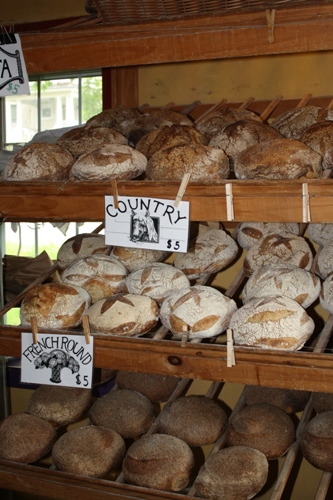 As the premiering dessert king of mix-ins (pre-Cold Stone Creamery), Herrell's transforms your best ice cream bites right in front of your eyes. Best scoops? Apple sorbet won over our petite food army, as did the dark chocolate ice cream mashed with fresh shreds of coconut and the banana creamy ice swirled with chocolate chunks and dosed with house-made fudge.

If you thought we already had enough beer this weekend, you're wrong! As a close to our trip, we tackled a nearby town's micro-brewed selection and can now say their Honey Pilsner and Twin Sisters Imperial Stout are both great picks if you're looking for a casual beer or two. 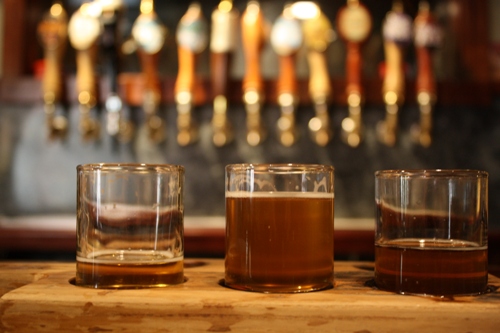 Thank you to Sage Hospitality, DishTrip's accommodation host, for allowing us to showcase their gorgeous (and extremely entertaining) property, Coco Key Water Resort in Danvers, MA. The fun, fabulous and comfortable spot not only housed attractive suites, but it also touted (as the name suggests) a gigantic indoor water park, a hair and nail salon, a state-of-the-art gym, pilates studio and much more. The entire set-up was definitely appreciated at the end of beer-guzzling DishTrip day.

As always, follow us on Twitter @dishtrip or friend us on Facebook for more dining details in a city near you.  Thanks for reading —we’ll see you on the next Dish Trip!