If you happen to find yourself in Dapsimni-dong, a neighborhood in Seoul, South Korea, don’t be surprised if you see some Southwest Airlines inflatable hats flying around on the heads of some the cutest kindergarten students you’ve even seen!   Let me explain. 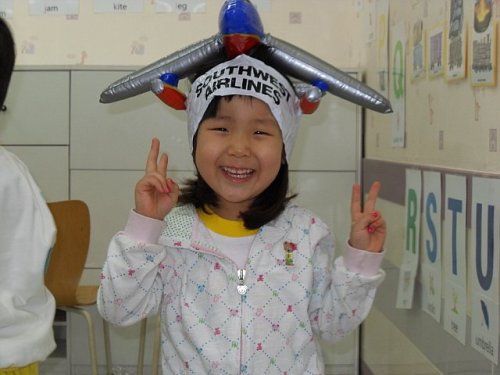 As I was putting together a "care package" a couple of months ago to ship to my sister, Jill, I decided to send the students she is teaching a special surprise, our infamous inflatable airplane hats.   Yes, Jill would be excited to receive her favorites that she can’t find in South Korea ... macaroni and cheese, flour tortillas, hamburger helper, makeup, favorite hair products, lip gloss (this one especially makes her happy), and Big Red gum.    AND, I knew  her students would absolutely LUV  the special treat I included for them in the package. 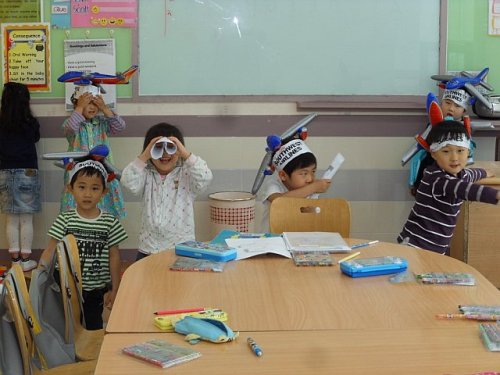 So,  $52.68 and two weeks later after shipping the package off from Nashville, I received a call from that weird number that had contacted me a few times since she moved in December.    Yes, it was my sister calling to thank me for the package.  She went on to explain that she and her Korean teacher counterparts had been planning for their big annual event, Parents Day.   She couldn’t believe it when she opened my package and found the inflatable airplane hats.   Not only because the kids would go crazy when she showed them, but because the topic for Parents Day was transportation.   How perfect! 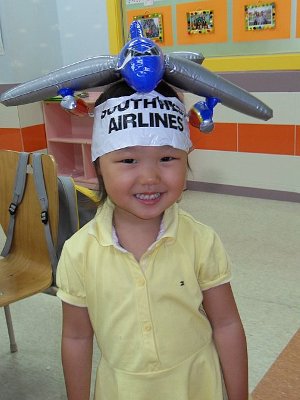 As the saying goes, “timing is everything.”    The Southwest Airlines inflatable airplane hats were the perfect addition to what turned out to be a great Parents Day in that little school in the middle of Seoul.

Judi2
Not applicable
Thank you for sharing this delightful story!
7 Loves

Monica11
Not applicable
I LUV it!! What a great story!
10 Loves

Anonymous133
Not applicable
this is a wonderful story haha so cute....i was just wondering on a side note though, where you were able to perchase these inflatable southwest airlines hats?
10 Loves

For those that criticize Southwests passenger treatment…

WiFi a waste of money; can’t work on flight

Where is my ITINERARY?? GONE