The International Labour Organization estimates there are 40 million people trapped in modern-day slavery around the world. Over 20 million women and children have been trafficked into the global sex trade. Stopping Traffic, a non-profit founded by Jain monks Acharya Shree Yogeesh, Sadhvi Siddhali Shree, and Sadhvi Anubhuti, creates educational documentaries, provides education scholarships and resources for medical and dental treatment for trafficking survivors, and supports trafficking shelters around the world by providing survivors with clothing, shoes, and hygiene items.

Stopping Traffic’s latest film Surviving Sex Trafficking examines the ongoing struggles of those survivors as they desperately fight to break free of their past, heal their bodies and minds, reconnect with a world of hope, and reclaim their lost humanity. Filmmakers Sadhvi Siddhali Shree and Sadhvi Anubhuti uncover the depth of pain felt by survivors in their film. Through conversations with victims around the world, Surviving Sex Trafficking reveals how the survivors escaped, how they continue to survive, and how they live day-to-day with the repressed trauma from the horrific events they experienced.

Stopping Traffic experienced firsthand how Southwest Airlines Employees have been educated on the topic of human trafficking. While filming for the documentary, one of the survivors featured in the film had a Post-Traumatic Stress Disorder (PTSD) trigger in Houston and missed her flight. When the filmmakers reached out to Southwest to rebook her, Southwest Employees understood the situation and quickly assisted to find another flight for the survivor. Thankfully, she was able to get another flight and resume filming in Las Vegas.

Stopping Traffic partners with socially responsible corporations and organizations to raise awareness about human trafficking nationwide. Southwest is a leading example among airlines in raising awareness about trafficking and training its Employees -- so there was no question to seek out a partnership to support the film efforts. Southwest provided complimentary air travel to help further the filmmaker’s efforts to raise awareness on this issue.

Human trafficking is not something that is only happening overseas or far away. It happens right here in the United States. Many survivors have shared their past stories as victims forced to travel from one city to another. Southwest has the Heart and compassion to help the vulnerable. We’re grateful and honored for the partnership and opportunity to raise awareness and end human trafficking together. 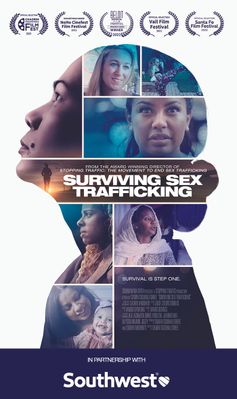