They fly through the air with the greatest of ease;  then they jump from the planes, landing where ever they please.   It looks like Jim and Elaine with both of their daughters (Lynnie is a Southwest Flight Attendant); followed by grandkids and assorted McPhee Family Armada.

Why would they do this? you ask with alarm.  Don't they know they might break a leg or an arm?  The answer will both delight and surprise; For 64 years of wedded bliss and they both turned 85!

They parasailed at 80 to great delight.  No Fear is their motto, thumbing their nose at fright.  Skiing on water or snow; parasailing or ballooning;  rafting the river - some call them looney!

I call them role models of a life well lived.  Yet they look to the future with much more to give. There's still square dancing and golfing; bridge and bowling, but I know a secret too good to be holding.

Jim and Elaine turn ninety in 2015;  the money's been paid, they'll do it again!  Our hats off, glasses raised, let's give a cheer!  The McPhees are amazing, and you heard it here!

Click here for a news story on the McPhie's 64-anniversary sky dive. And below is a picture of daugher Lynnie who joined them on the jump. 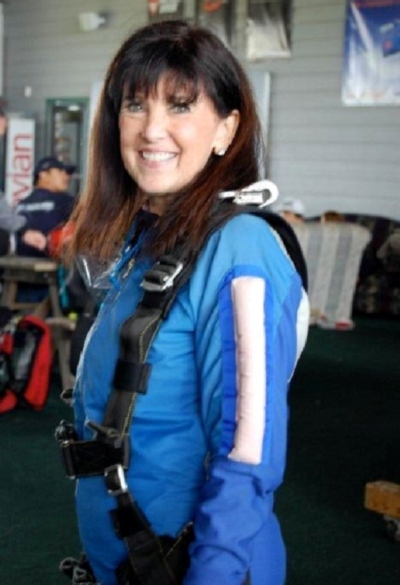