The Day I Became a Grandma

pskirving
Explorer C
I am not a frequent flier on Southwest. My husband and I live north of Chicago and Southwest flies out of Midway Airport, which is located south of Chicago and much farther than O'Hare Airport. But, we will be flying Southwest from now on.
I had the most amazing experience with Southwest Airlines, and I will forever be appreciative of the incredible service they provided.
On November 28th, my husband Greg and I were driving from Chicago to Raleigh, NC. Our daughter was nine months pregnant. Her due date was two days later, but Meghan showed no signs of going into labor. So we headed down with a packed car; the bassinet I used for her as a baby, gifts, suitcases, and even our golf clubs just in case she did deliver late.  While on the road, we received a text from our son-in-law, Mike, with capital letters:
WE ARE ON THE WAY TO THE HOSPITAL!  MEGHAN IS IN LABOR!
My husband agreed I should try to get there as soon as possible. If I could get a flight, he would continue driving by himself. I called the airlines flying out of Indianapolis, and Southwest had two flights with one available seat on each. They were also the most reasonably priced. Since we were still two hours away, I put a ticket on hold for the later 12:50 p.m. flight.
We pulled up in front of the airport at 11:45 a.m.  I jumped out of the car, kissed my husband, and ran into the airport. There were three agents at the desk with three groups in front of them: a family of five in total chaos, a woman removing articles from one suitcase into another, and a gentleman who could not find his I.D. I assumed I would never make the earlier 11:50 a.m. flight, but was still anxious about the later flight. When I finally approached the counter, I blurted out, "My name is Patti Skirving, I have been driving from Chicago, my daughter is in labor, she's seven centimeters dilated and I need to get to Raleigh!"
This wonderful woman looked at me and said,"I am getting you on the 11:50 flight!  I've contacted the crew, they know you are on your way, so get going and good luck!"
Not believing I would actually make the flight, I ran to security, somehow made it through without much delay, and ran to the gate. Of course it was the farthest gate, and all the way I was thinking that my husband was right, I needed to work out more! As I was approaching the gate, an Agent saw me running and yelled out, "Are you the Grandma-to-be?"  With that, she came out from behind the desk and held out the boarding pass to me. I grabbed it and ran onto the plane.
Knowing I was holding up the plane's take-off, totally amazed, and so thankful that I might just arrive in time for the birth of my granddaughter, I entered the plane shouting my apologies to everyone on board. And with that, the Flight Attendant announced, "The Grandma-to-be has arrived!"
The entire plane began to clap!  Needless to say, I was in tears!  Plus, somehow they had a seat in the front row waiting for me! I sat down, fastened my belt, and we took off!
The best was when the announcement came. "We are arriving two minutes earlier than the original arrival time," the Captain said. "A definite show of appreciation for your kindness in waiting for the Grandma-to-be. Now she will be there for the birth of her first grandchild." Again, more clapping!
But it gets better! I had a half-hour connection in Baltimore. When I arrived at the gate, the passengers were lining up to board the plane, according to their boarding number. My number was A16.  I was the first passenger to board following the Business Select passengers! Again, I sat in the front row of the plane. We arrived at 3:35 p.m.
Amazing!
Running out of the airport, I jumped into a cab, yelling, "Rex Hospital, my daughter is having a baby!" Pulling out of the airport, I received another text:
Grace Elizabeth has arrived, mother and baby are perfect!
I shouted to the driver, "I'm a Grandma!"  The driver turned around and cried, "You have brought such joy into my life." With that, the driver and I, both in tears, arrived at the hospital.  And there was my beautiful granddaughter, Grace Elizabeth, being held by my gorgeous daughter Meghan, now a mother herself. 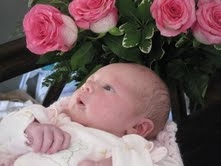 November 28th was the most incredible day of my life. I don't know of another airline that would have understood the importance of the day and taken such an amazing effort in making sure I arrived as soon as possible in Raleigh. Only Southwest Airlines would have made sure I boarded that plane, sat me in the front row and provided me with a boarding pass that allowed me to board the connecting flight with ease and again, a front row seat. And only Southwest Airlines would have cared enough to make sure I arrived at that hospital room in time to witness the miracle of birth with my daughter, my son-in-law and my precious little Gracie.
I have always thought of Southwest Airlines as the fun airline to fly. But it now means so much more. It is the airline that actually cares and is willing to take the extra steps to really make a difference.
I want to thank the Agents in the Indianapolis Airport.  Unfortunately, I did not get the names of the Ticket Agent, Gate Agent, or Flight Attendant. Thank you for my wonderful early Christmas gift and thank you for the wonderful story I will be able to tell Gracie about the day of her birth.
339 Loves
14 Comments