The Day the World Changed

Sixty years ago on May 2, 1952, the world changed forever.  On that date, the jet age began as British Overseas Airways Corporation (BOAC) made the first commercial jet flight with the de Havilland Comet 1 from London Heathrow to Johannesburg, South Africa.  The new jet had a limited range so it made en route stops at Rome, Beirut, and Khartoum.  Nevertheless, it averaged 525 miles per hour at an altitude between 35,000 and 40,000 feet.  For more details on this historic flight, click here for Flight magazine’s report in their May 9, 1952, edition. This picture of the world's first jet airline flight is from British Airways excellent historical site. 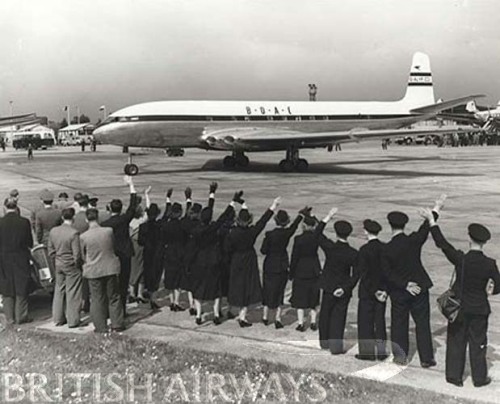 Unfortunately, after a spectacular introductory period, the original Comet exhibited fatal design flaws that grounded this sleek new revolutionary airframe until the debut of the improved and larger Comet IV in 1958, just shortly before the introduction of Boeing’s 707.  However, once airline passengers got a taste of the speed and comfort of jet travel, there would be no going back.