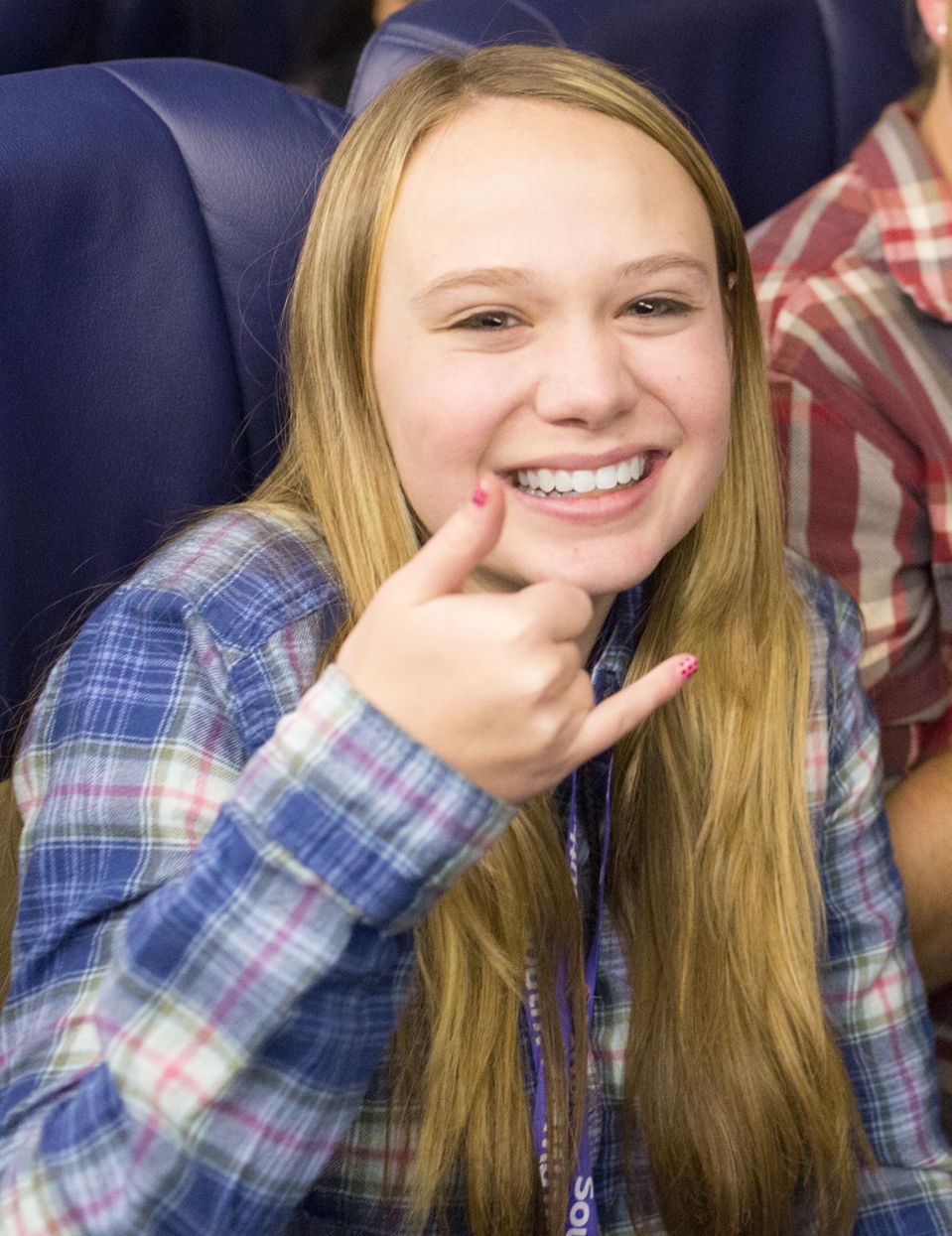 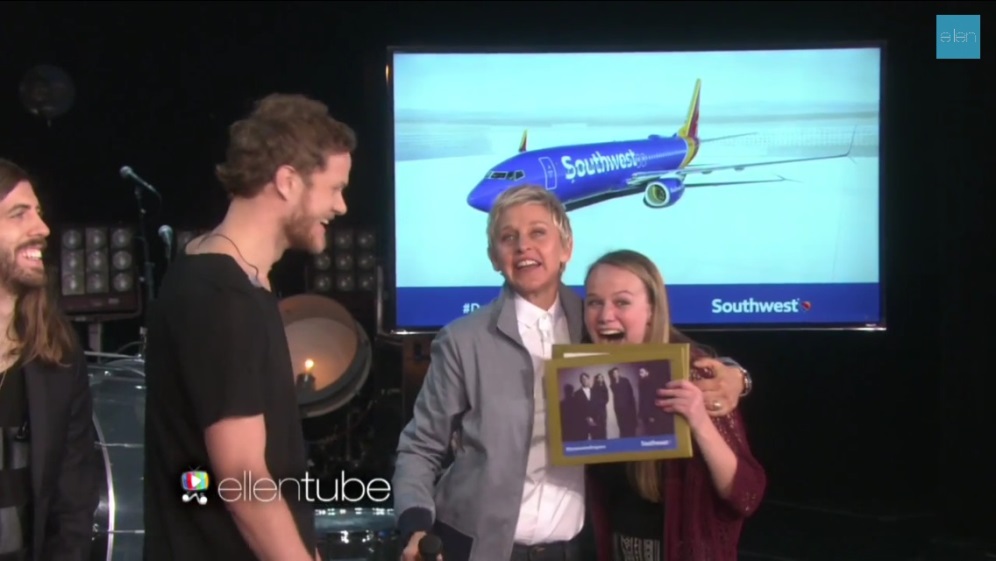 This post is guest written by Kate Depetro, who won a seat on the Imagine Dragons Destination Dragons Tour on the Ellen Show. If you were to ask me how I won, I would tell you the stars aligned. If you were to ask me if I knew what was about to happen, I would tell you I never dreamed of anything this big. My eyes glanced down at the sheet of paper with the Destination Dragons tour info in front of me. I would be traveling with Southwest Airlines and the band Imagine Dragons for the next week. I keep repeating the entire thing in my mind. It all happened so fast and it felt like a dream. I was just on the Ellen DeGeneres Show. I just met Ellen. I just met my favorite band in the world. I am going to their concert tonight. I am going on tour all over the country with the band. How does a fifteen-year-old girl who stresses over English homework and if she’ll be late for school again comprehend what has just happened to her? As the members of the Southwest Team explain to me and my dad where we will be traveling, the places lit up in my mind. Provo, Utah, Las Vegas, and Atlanta. Looks like my school vacation would be extended a little bit longer. Thanks Ellen! This was the start of what would end up to be the best week of my life. “First in line!” said Dan, the lead singer of Imagine Dragons, as he smiled at me. “Of course,” I answered. I was at the meet and greet with my band, and, of course, I was first in line. 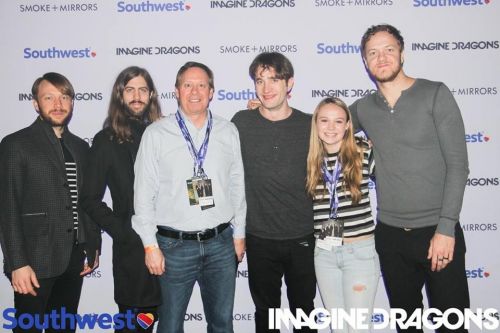 A couple minutes later the sound of their new single, “Shots” started playing and the Imagine Dragons were on stage. These next songs led into, “It’s Time,” which has been one of my favorite songs since it came out. The concert was amazing. The band played each note perfectly and their voices live sound amazing. As I was walking out of the Troubadour club, the location of the first concert, people around me started to say, “Oh my gosh! You met Ellen! I saw you on TV today! Can we get a picture?” It was so fun to meet all these different people and soon we all started singing Imagine Dragon songs. I also met some of the people I would be traveling with on the Destination Dragon tour and we all agreed how amazing this trip was going to be. As I was walking back to my car, I looked up towards the sky and then back at the Troubadour. Tonight was my last night in LA. This is the city that changes peoples’ lives. Because instead of flying back to Rhode Island tomorrow, I would be flying to Provo, Utah, with a rock band. No big deal. 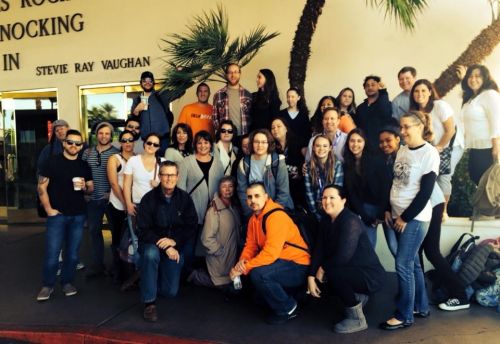 I learned a couple things from my experience with being on tour. I would like to thank my family and friends who supported me and were happy for me through this amazing experience. There is nothing like family and I am so lucky to have some of the greatest friends in the world. Next, I would like to thank the people from across the country who also won seats on the Destination Dragons tour with Imagine Dragons. You all became a family to me and I had so much fun with you, from all of our heads up games to concert bonding moments. I am so happy we all became a close group like we did. I would like to thank the band managers and Imagine Dragons. Your music is my inspiration. You were all so kind to me and inspiring me to do better in the world. You have forever changed my life. Finally, I would like to thank Ellen DeGeneres. I have watched the Ellen show since I was in fifth grade, so it was a real surprise to win the Destination Dragons Tour on the Ellen Show! She makes me laugh and dance, and I am so thankful that she sent me on the tour—it was life changing for me! 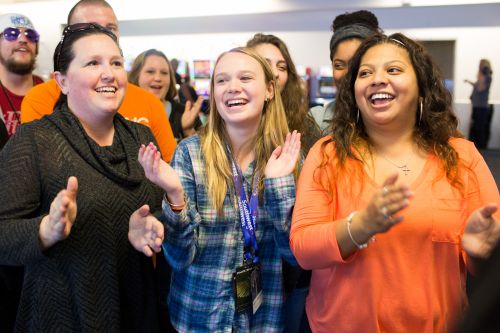 You never know what can change in a week. I mean hey, I went to California for school vacation, and ended up on the Ellen show. Never say never.
2 Loves