The Gift of Life—Twice in My Lifetime

A few years ago, our beloved Brian Lusk wrote a very special blog, A Tale of Redemption,  that my family will always treasure.  He posted his moving thoughts about my life’s story and what the Vietnam War meant to him. Not long after his post, during Asian Pacific American Heritage Month, our Company posted the NBC Bay Area affiliate’s story about my quest to find an American man named Jim Smith, who had helped me, my brother, and three teenaged cousins escape Vietnam in April 1975.  Throughout May of 2010, I received countless messages from Employees who shared their LUV, personal stories, and hopes that I might, one day, find my American Hero. 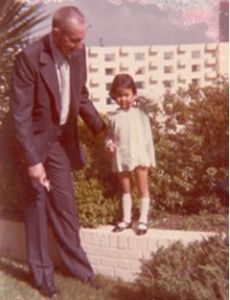 With Jim Smith in the U.S. a few years after I left Vietnam
Well, after 18 years, I finally found Mr. Smith!  It has taken me a while to process everything and to be ready to share my somewhat “happy ending.”  It’s not a fairytale ending, but I have found peace within myself. I don’t have any memories of Mr. Smith, but I always grew up knowing that he’d been a friend of my mother’s in Vietnam and had helped us flee in 1975.  I have a couple of old photos—one where I’m in his arms in Saigon as an infant, and a second that was taken in the States a few years later, after my brother and I had been placed with a foster family and Jim came to visit. In recent years, as I’ve reconnected with my past, returned to Vietnam, and learned more about my birth family, I began to wonder what had happened to Jim Smith and if I could find and thank him for rescuing us. Unfortunately, my adoptive family had very little information about him—they believed he’d been a contractor for the South Vietnamese military and that he’d owned orange groves in central Florida, but they’d never heard from him again after a few visits.  As you can imagine, trying to track down a man with the name Jim Smith after so many decades was daunting; I even learned that there’s a Jim Smith Society of men who share the name!  My husband put together a simple web site and asked friends who’d worked in Saigon during the war whether they’d ever run across Mr. Smith; we figured that he would have needed good connections to get five kids on a plane as the city was falling.  Unfortunately, while we got some tantalizing clues—including one man who contacted us and suggested Smith was a CIA agent he’d known—we never got anything concrete.  Even the Freedom of Information Act requests to turn up my immigration paperwork went nowhere. After many years of dead ends, I happened to be home for a rare visit with my adoptive family in early 2012 and asked whether they might still have any old files.  They were surprised to turn up a dusty folder that contained a P.O. box address and phone number in Odessa, Fla., a small town near Tampa.  After so many years, the number was no longer in service, but my journalist husband did some snooping and found the number for a church in Odessa with a good-sized cemetery.   And the head of the cemetery guild, it turned out, remembered Jim Smith and how he’d helped a Vietnamese family! 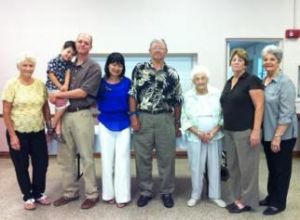 With my family and Jim Smith's church acquaintances in Florida
Unfortunately, she told us, Jim had passed away many years ago, but he was buried behind the church, and his family home stood not far away.  On July 22, my husband and I flew on Southwest to Tampa with our then-four-year-old son and met several of Jim Smith’s longtime friends.  They told us that Jim had grown up in a family of orange growers; that he’d served in the U.S. Army; and that he’d gone to Vietnam to help the South Vietnamese Navy dredge canals. Mr. Smith’s friends also told us how he would never let anyone pick up a check at the local diner.  One of them recalled that, at Jim’s funeral, the pastor had said, “We lay to rest one of the last Southern gentlemen you’ll ever meet.” 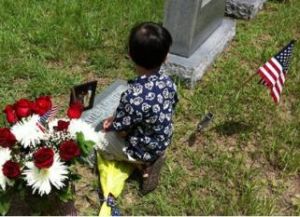 My son James at Jim Smith's gravesite
My world came to a brief stop as I watched my son James place our bouquet of red roses and an American flag next to the gravesite.  He understood the importance of our finding Mr. Smith.  My very active and gregarious son sat quietly next to the tombstone, and my husband and I stood behind to give James a moment to himself with Mr. Smith.  In my mind, I kept repeating that if it hadn’t been for Mr. Smith’s compassion for my family, I wouldn’t be staring at my God-given son. This past August, Peter and I finally returned to Vietnam with James.  We thought five would be a good age to make the trek to the third-world country and perhaps for him to be old enough to remember our trip.  My brother Lam, who fled with me when I was two-and-a-half, met us in Saigon (now Ho Chi Minh City). During our trip, we met with relatives who answered lingering questions about Mr. Smith, which brings me to this moment in time with you.  It was confirmed that I was a premature baby and that my mother, Nuoi Thi Phan, had been Mr. Smith’s housekeeper in Saigon during the war.  We lived in his apartment, and he grew to love me like his own daughter, helping provide the milk and other resources to nurture me to back to health.  In fact, from the looks of my baby pictures, I grew to be quite a healthy, chubby baby.  When I turned one, he threw big party to celebrate that I’d survived! 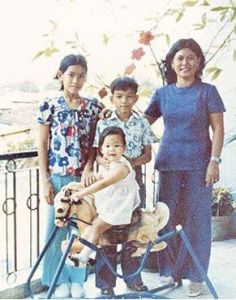 With Lam, my mother, and my cousin Lan on our balcony in Saigon 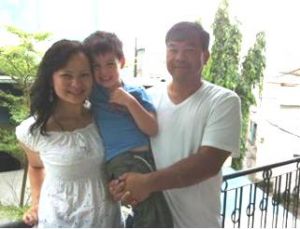 With my son and brother on the same balcony
Words can’t describe how happy I was to return to the apartment after 38 years with my son, husband, and brother.  As I hugged James on the balcony, I thought about all that I had been blessed with as an American, and all the things that I want for James.   James’ keen awareness of the significance of the house amazed me; he asked if we could run around the balcony as I once had when I was a toddler.  He knew that this was the place where my mother had last held me. We also learned that Mr. Smith has a son, who, as the war was ending, warned his father to get Nuoi’s children out of the country because the Communists were coming, and we would surely be killed.  He also had helped process our sponsorship papers from the States.  Unfortunately, he’s told me that his memories of Vietnam are so painful that he’s unable to tell me more about his father, or more details of how we came to flee to the U.S.  But I will forever be grateful to both Smiths for their selfless acts in helping five kids—and, especially to Jim for saving my life … twice. From the bottom of my heart, thank you for all of your prayers and the positive messages to keep my faith as I searched for Mr. Smith.  May the New Year bring you and your loved ones much love, laughter, and life!
13 Loves
6 Comments

millie-richter-
Not applicable
I am so happy that your search for Mr. Jim Smith was fulfilled after all these years. To many of us, your story is an important lesson in giving and receiving. Over the years, your sharing with APALI youth leadership classes has inspired students to reflect deeply about the meaning of love, identity, family, and community. I am sharing your post with these classes.
2 Loves

Employee
Hi Dr. Chang~ I'm honored to speak to your students each year; they inspire me as well! Thank you for all that you do to make a positive difference in their lives. Please give my best to the alumni, and I look forward to visiting with the new class this summer! Kim
1 Love

vu_pham
Not applicable
This is such a moving story, Kim! The gift of life is so precious and you really honor Mr. Smith! I fondly recall how you shared the gift of history with the Smithsonian through the generosity with your personal donation and Southwest's support. You are paying it forward and now are once again giving to history, culture and the future. Keep up your great work! Vu Pham
2 Loves

Employee
Hi Vu~ I'm very touched by your post, thank you so much for your kind words. It's been too long since we last talked; I hope that life is treating you well! Take care, Kim
1 Love

ashleynicoleoh
Not applicable
Hi Kim, thanks for sharing such an incredible story. I'm so pleased that it ended in fulfillment for you. It's a great lesson of perseverance and gratitude and the giving nature of people. I'll be sure to share it often with friends and family! Have a wonderful year!
1 Love

mcwai123
Not applicable
Kim: Thank you for sharing your story; it's really touched me. You demonstrated true perseverance in pursuing this - over the decades - to this conclusion. Such stories of helping others that Jim Smith demonstrated need to be told so we can all learn from it and feel good about being an American. Thank you, Jim Smith, for your generosity of spirit and love of your fellow human beings. Kim - may you find peace and closure after all these years.
2 Loves