The Incredible Journey of Spice the Kitten 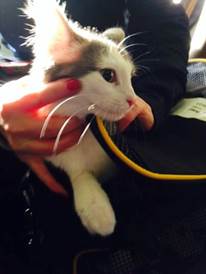 Some of you may remember the movie Homeward Bound, in which household animals become lost from their family and make the Incredible Journey to reunite with their loved ones.  It’s truly a heartwarming story. But that doesn’t just happen on the big screen—it also happened on one of our Southwest 737s. Meet Spice the Kitten, who slipped out of her home in Albuquerque, New Mexico, on Halloween night and ended up in Portland, Maine—about 2,300 miles away from her home.  She was found outside of a Portland thrift store in a gym bag, and, after being taken to the Animal Refuge League of Greater Portland, a scan showed that she had a microchip.  From that microchip, her family was located. When Tom Labrie, Southwest Airlines Station Manager at the Portland Airport, heard the story, he and Kristean Jacobs immediately wanted to help get Spice back to her home.  After working with the Animal Refuge League and IDEXX Laboratories, a company that specializes in veterinary technology, flights on Southwest Airlines were arranged to fly Spice and representatives from the Animal Refuge League to accompany her on the flight.  Just yesterday, Spice flew in style in her very own Southwest-branded pet carrier that fit under the seat in the aircraft cabin. At Southwest, we’re in the business of connecting People (and in this case, kittens!) to what is important in their lives.  Thanks to our friends at IDEXX Laboratories and the Animal Refuge League, we were able to connect Spice back to her family and help create another incredible journey.
15 Loves