The idea of live music inflight never ceases to excite me.  A lot of us around Southwest are passionate about music, and a show at 35,000 ft. has a knack for changing stale air into an exciting atmosphere.

The idea for the Travelin' Taylor Tour was hatched months ago, when the Taylor Guitars folks popped in to Southwest Headquarters in Dallas, just to see what was going on and bounce ideas off us.   It's amazing what similar personalities can get done; a game of tug of war where only one side of the rope is occupied, and victory slides across effortlessly with a few simple heave-hos.  A strange analogy, sure, but that's what crafting the Tour has felt like; one victory after another.

In the above video, Taylor Guitars' Andy Powers declares, "The best musician is, in a lot of ways, the one having the most fun."  At Southwest, we know all about fun. 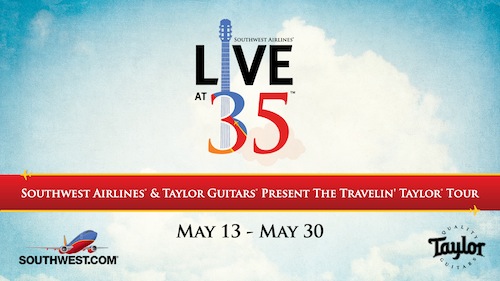 The premise of the tour is simple: six current and rising stars will play iconic Taylor Guitars on six different flights, and have a lot of fun while doing it.  These aren't just ordinary guitars, though. As you'll see in the video, the guitars have been customized by Southwest's and Taylor's designers.  Each design element is as specific as the guitar's expertly crafted wood.  And here's the kicker: each artist will sign the guitar, and you have a chance to win it by entering at southwest.com/taylortour.

Featured in the Travelin' Taylor Tour, in order of appearance:
Follow along and participate on Twitter and Instagram using the hashtag #taylortour, to learn how you can take home some sweet stuff!
97 Loves
1 Comment