So, Christmas is over…all of the presents have been opened, you've eaten more food than a medieval king, and you have run out of topics to chat about with the in-laws. You munch on yet another leftover Christmas cookie and casually think about what’s next, and then it hits you... New Year's Eve! Immediately, you see yourself soaring in a canyon blue Boeing 737 with a red belly and dream, "Hmm, what if I could get to...?"

Well, ladies and gentlemen, I'm here to answer that call with my top five destinations for a most memorable of New Year's Eves. So listen up, find a paper and pencil (or log onto southwest.com) and take note because I'm about to give wings to your travel bug.  I’d like to put this disclaimer out there—there is no New York in this list because, well, EVERYONE already knows about this celebration—plus, you can just watch it on TV anyway. As I'm sure you already know, we Americans like to drop things on New Year's Eve.  Anything from giant crystal balls, to pickles, to dead carp (that's Wisconsin…I know you were wondering). So, if there were a king of dropping things on New Year's Eve, Pennsylvania would take the crown. If you fly into Philadelphia, you have a plethora of unique "drops" all within a short two-hour radius of the airport. And, since we are foodies here at Dish Trip, we love that a lot of foods make the list. The following are some of my favorites—it may be hard to pick only one, but there's always next year, right?

Dillsburg – Two pickles, one at midnight Coordinated Universal Time (UTC) with the main drop being at midnight Eastern Time

And if you decide to stay in the City of Brotherly Love for the celebrations, you’ll be able to fill up on incredible eats from culinary superstars like Iron Chef Jose Garces (he has eight different concept restaurants in Philly!), Top Chef's Kevin Sbraga and Eric Ripert–whose restaurant 10Arts is located in the dead-center of the Avenue of the Arts. 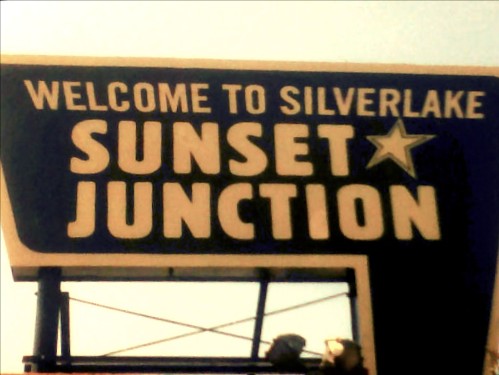 You may be thinking LA is all Hollywood and celebrities, and you'd be half right, but there's enough to do in this city that it will keep you partying all through NYE and beyond. And once you finish sipping (or gulping) champagne all night long, don't forget to save some parade energy for the Rose Bowl's Parade of Roses the next morning in Pasadena.

“I'm on a boat!” - You don't have be a celebrity to party and watch fireworks on a luxury boat. In fact, the original luxury liner, The Queen Mary, is now permanently docked in Long Beach. Built in the 1930's, this grand ship was the definition of traveling in style, so sip champagne and create a NYE memory that your friends will all be jealous of.

Mickey Mouse - The home of Walt Disney's original "theme" park, Disneyland is open on NYE until 2:00 a.m. You can ride the Matterhorn to your little heart's content and cap off the night with a hug from Mickey (or Minnie…whichever is your favorite mouse).  Plus, you can watch the best fireworks show in town.

Of course, you’ll want to fill up on stellar LA eats and swanky cocktails, so stay tuned for our recap of our recent Dish Trip LA from Mary Bigham and Amy Strauss. Until then some of our favorites include: 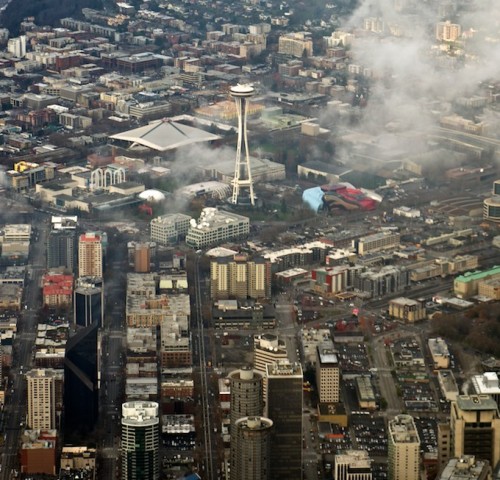 Ah Seattle, you beckon with your coffee, seafood, and cozy Pacific Northwest sensibility. They don't officially drop anything in this city, but who needs to drop anything when you have fireworks over Lake Union with the Space Needle as the backdrop. In this city of cozy neighborhoods, green landscapes, islands, and mountain vistas, there's a delectable version of NYE to fit any taste. Plus, with Seattle being the coffee capitol of the USA, come New Year's morning, you are guaranteed the best shot of espresso anywhere when you're recovering from that last glass of champagne. See my Southwest Airlines Seattle coffee tips here!

So, where to revel in the Emerald City? If you want to start at the top, the Sky City Restaurant atop the Space Needle offers an amazing NYE dinner with the best view of the fireworks in the city. In a city that is literally at sea level, it's nice to have a 500 foot height advantage over your fellow festive citizens. If tasty cocktails are more your speed, Jamie Boudreau's newly opened Canon bar is offering up a special menu created by Chef Melinda Bradley with drink and food pairings just for NYE. If you're the kind of person who, upon hearing the word "salsa" thinks, "where are my dancing shoes?!," then the Century Ballroom is where you should be. This beautifully vintage venue will be hosting three dance rooms, with the ballroom having dinner and a live salsa band. But, if you prefer your live music to be performed by 100 people at a time, then you belong at the Seattle Symphony to hear Beethoven's 9th Symphony followed by champagne and deserts with maestro Schwarz. Last but not least, if you still have the space in your festive gullet, then swing by my two favorite breweries in town, the Elysian and The Pike.  Each are a solid choice with their own character and seasonal beers, and The Pike brewery is even throwing on the option for a prix-fixe three-course pairing menu.  How can you say no to that?! 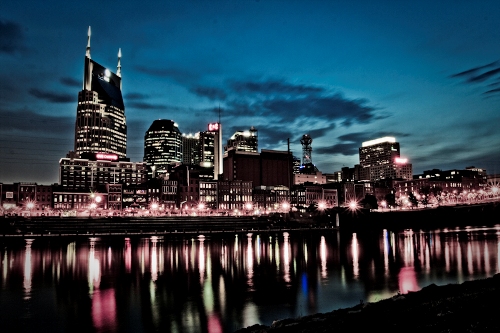 Music City—every time I visit this town it just gets better.  The music, the coffee (yes, coffee!), and food will match any of America's greatest cities. And yet, the locals will still look you in the eye and say hello and are ready to show you their favorite music venue in a heartbeat. So, it's no surprise that their version of a NYE celebration is the same way.  Nashville's Bash on Broadway is basically a huge house party with a few thousand of those cool people you always wanted to meet. Throw in Lynyrd Skynyrd as host, some fancy fireworks, and the drop of a giant 15 foot music note, and you have a recipe for a celebration that only Nashvegas can provide.

Some of my favorite spots to fill up on local grub are at Mas Tacos. This was originally a food truck, but they are now indoors and tastier than ever. I recommend the fish tacos, but check their Twitter feed @mastacos for daily offerings. Of course I’m a coffee guy, so for a caffeine fix I recommend Crema Coffee—it’s literally the best coffee for hundreds of miles around, and they just started roasting their own in-house. If it’s a tasty cocktail that you’re looking for, you need to get your palate over to the Patterson House and the Holland House Bar and Refuge.  Each with their own styles, they feature not only the standards but also new inventions influenced by seasonal ingredients. Plus, both establishments have top-notch food offerings to boot. There are dozens (if not hundreds) of music venues in Nashville, but most don’t serve food.  If they they do, well, it’s usually the music and beer that you go for. I was pleasantly surprised when a local tipped me off to The Family Wash, a little gem tucked in a local neighborhood that offers amazing live music and delicious shepherd's pie. Pair this with a pint of local Yazoo brewery beer, and you’re a happy camper. 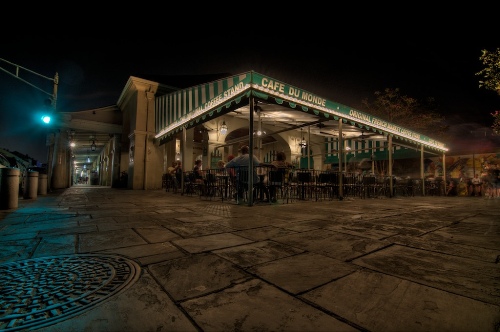 This town is near and dear to my heart, and it's not because of its devilishly good seafood.  NoLa is a triumvirate of food, people, and music that I haven't found anywhere else in the world. Gumbo, jazz, and a Sazerac all in one night—need I say more? Combine these hedonistic pursuits with a shorts-worthy winter climate, and you'll know why the streets are packed come December 31. This year, the NYE celebration will feature dropping "Baby New Year" from the JAX Brewery, fireworks, and music lasting until your eyelids finally close. Might I suggest hearing the one and only Rebirth Brass Band Band at Howlin' Wolf and then wandering over to Frenchman Street.

When in New Orleans, I always make it a point to visit my two favorite watering holes, both of which are made great by their mixologists at the helm. First is Bar Uncommon at the Renaissance New Orleans Pere Marquette Hotel just beside the French Quarter.  Chris McMillian has been a staple of the New Orleans cocktail scene for decades, and in my opinion, creates the best Mint Julep in the world. Second is Cure, located slightly off the beaten path, this little house of wonder is a delight for connoisseurs of food and drink alike, plus their depth of mixology talent is arguably the best in the south. For some tasty bites, visit Cochon for pork heaven, La Petite Grocery for modernly relevant southern elegance, and Coop’s Place for a good ol’ down and dirty cup of the best Jambalaya that will ever cross your lips.

Don’t forget to follow us on Twitter @dishtrip, or friend Dish Trip on Facebook for more dining details in a city near you. Thanks for reading—we’ll see you on the next Dish Trip!

Dish Tip for Dish Trip? Do you have a favorite place to celebrate the New Year? Share with us below and wherever you are, when the clock strikes twelve on 2012, know that I'll be toasting and singing Auld Lang Syne right alongside you all!

This post was written by Dish Tripper Nathan Slabaugh