Trick o' Tweet Your Way to the Haunted Headquarters

For us at Southwest Airlines, Halloween is one of the most celebrated and anticipated holidays of the year.  We work really hard, but we also know how to celebrate and play hard!  For 11 months out of the year, Southwest Airlines Headquarters is buzzing with smiling, happy People.  From the how-do-you-dos throughout the halls, to the outdoor volleyball and world famous deck parties – the joy can be felt all around.  However, in late October, the scenery and mood changes.  Hallways echo with sinister laughter, the lobby is transformed into a playground for ghouls and apparitions. 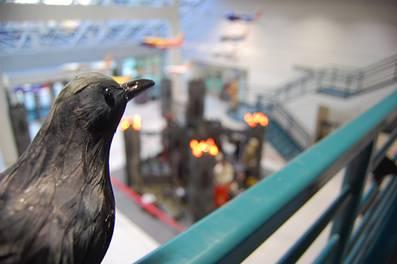 Sound like FUN?  It is!  And this year, you might win an invitation to this exclusive party.

Do you have what it takes to roam through the Haunted Headquarters?

Tweet @SouthwestAir with your picture, dressed in this year's Halloween costume.  We will select the four best entries to win a trip for each winner and their guest to travel to Headquarters and see the festivities in person!

Make sure you read all the rules and use the hashtag #trickotweet to officially enter the contest via Twitter!

For more fun photos of past Halloween events at our Headquarters, visit our Flickr page here.

1. To Enter: No purchase or obligation necessary.  Contest runs from October 18, 2010, 12 p.m. CST - October 19, 2010 12 p.m. CST.  To enter without purchase or obligation, tweet your Halloween costume photo to the @SouthwestAir Twitter page using the hashtag #trickotweet.  Use of any device to automate entry is prohibited.  Proof of submission of an entry shall not be deemed proof of receipt by Southwest.  Southwest Airlines computer is the official time keeping device for the contest.  Southwest is not responsible for entries not received due to difficulty accessing the internet, service outage or delays, computer difficulties or other technological glitches.

The photos will be judged will be selected by a Southwest Airlines panel of judges from the Communications department.
The judges will be judging on the following qualities:
• Creativity and Originality: 20%
• Entertaining: 25%
• Southwest Appeal: 35% entry should reflect our Culture and Fun-LUVing Attitude.
• Rules: 20% Read and complied with the official rules.

You warrant your photo will not be sexually explicit, unnecessarily violent or derogatory. It cannot promote drugs, alcohol, or firearms.  It cannot contain trademarks, logos or copyrighted materials owned by others.  It cannot depict the likeness of anyone without their permission. Entrants warrant that the photo is original. All entries become property of the sponsor and will not be returned.  Entries limited to one (1) per person. Sponsor is under no obligation to post any entry.

2. Drawing:    All prizes are guaranteed to be awarded.  Odds of winning will depend on the total number of eligible entries received.

3. Prize: Four (4) Grand Prizes will consist of: two (2) roundtrip airline tickets on Southwest Airlines from the closest major airport to winner's residence served by Southwest Airlines on published, scheduled service (subject to Southwest Airlines terms and conditions; certain restrictions may apply) to Dallas Love Field Airport, and 1 night at a hotel (double occupancy) in Dallas (meals, telephone calls, tips and other incidentals and costs are not included). No substitutions, cash equivalents or transfers of a Grand Prize permitted, except at the sole discretion of Sponsor. Winner and guest, if any must travel on dates and times specified by Sponsor. Exact travel dates are at the discretion of Sponsor. All persons must depart and return to the same airport. Prize is not transferable or redeemable for cash.  Approximate Retail Value (ARV) of Grand Prize is approximately $1,500.  ARV of all Grand Prizes is approximately $6,000.

4. Eligibility:  Contest open to all legal US residents, 21 years and older as of the start of the contest.  Void where prohibited or restricted by law.  Contest subject to all applicable federal, state, and local laws and regulations.  By participating, entrants agree to these official rules and accept decisions of the Sponsor as final.  Void in Puerto Rico and where prohibited by law. Employees, and directors of Southwest Airlines and the members of their immediate families (spouse, parents, children, and siblings, and their spouses) and individuals living in the same households are ineligible to participate or win.
The promotion is offered in the United States only and shall only be construed and evaluated according to United States law.  Do not proceed in this site if you are not located in the United States.

5. To Claim Prize: Winner only will be notified by Direct Message via Twitter, and will be required to complete and sign an Affidavit of Eligibility and Liability Release and, where legal, a Publicity Release, which must be returned within seven (7) days after prize notification or prize will be forfeited and awarded to an alternate winner.  If prize notification letter is returned undeliverable, the prize will be awarded to an alternate winner.  Grand Prize winner’s guests, or if minor(s) their parent(s)/legal guardian(s), must execute Liability Releases, and where legal, Publicity Releases prior to the issuance of travel documents.  Unclaimed or undeliverable prize will be forfeited and awarded to an alternate winner.  Prize is not transferable or redeemable for cash.  Prize is guaranteed to be awarded.  Acceptance of prize constitutes permission (except where prohibited) to use winner’s name, hometown and likeness for purposes of advertising, promotion and publicity in any media without additional compensation.

6.  Limitation of Liability: Neither Sponsor, nor their affiliated entities, are responsible for printing or typographical errors in any related materials; stolen, fraudulent, entries or mail; or transactions that are processed or lost due to computer or electronic malfunction.  Winner is solely responsible for payment of all federal, state, and local taxes on prize and for any travel or other expenses not specifically mentioned in prize description.  Sponsor reserves the right to cancel or modify Contest if fraud or technical failure compromise the integrity of the Contest as determined by Sponsor in its sole discretion.  This Contest offer is being made exclusively by Sponsor.
Sponsor not responsible for technical, hardware, software or telephone failures of any kind, lost or unavailable network connections or fraud, incomplete, garbled or delayed computer transmission whether caused by Sponsor, user, or by any of the equipment or programming associated with or utilized in the promotion or by any technical or human error which may occur in the process of submissions which may limit a participants ability to participate in this promotion.

All requests must be received by October 31, 2010.  Utah and Washington residents may omit return postage.