cday
Not applicable
This past Sunday, June 3, AirTran began service to Los Cabos International Airport (SJD, serving San Jose del Cabo and Cabo San Lucas) from Orange County (SNA)! The first flight to SJD arrived promptly at 3:30 p.m. and was greeted with a water cannon salute.
All the Customers onboard the inaugural flight were given AirTran t-shirts and swag, and a few lucky winners received excursion packages from our friends at Cabo Adventures (think … swimming with dolphins, snorkeling, and zip-lining)! 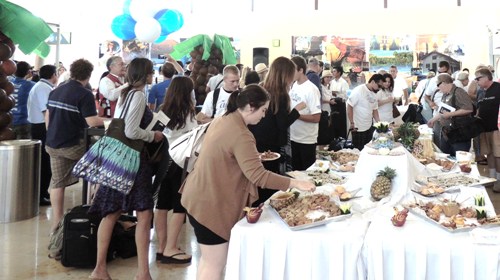 As the beautiful plane parked on the tarmac and Passengers deplaned via air stairs, we had a mariachi band, chilled Coronas and margaritas, fresh seafood from the Baja Coast, and a festive celebration awaiting their arrival in the airport. The smiles and enthusiasm on the faces of the Customers as they walked into the party atmosphere were priceless. 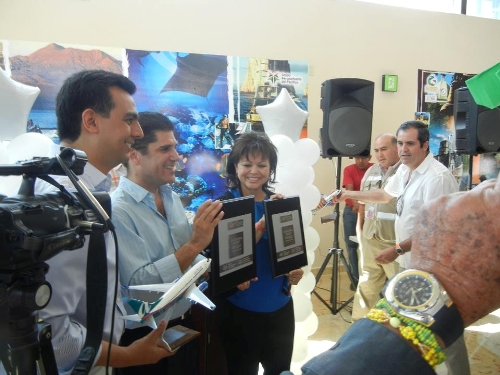 We held a press conference where Southwest’s Community Affairs Manager Lidia Martinez (above right) spoke about the introduction of AirTran’s low fares and excellent Customer Service to Los Cabos and a little about our ongoing integration efforts. Raul Revuelta (above left), Chief Operating Officer at Grupo Aeroportuario del Pacífico (the company that manages the airport) and Ruben Reachi (above middle), Secretary of Tourism for Baja California Sur, both spoke about their support of the new service and more.

The event received tremendous media coverage, which helped spread the word about the arrival of AirTran.  We currently have one flight daily between Los Cabos and Orange County.  Be sure to put this destination on your list of summer nonrev trips.  The beaches are beautiful, the food is world class, and the people are so nice and hospitable.  Viva Los Cabos!

eric-montz
Not applicable
PLEASEEEEE add a flight from SMF (Sacramento) to Los Cabos!!! It's the only flight that hasn't been picked up by another carrier since the demise of Mexicana. Flight was always packed!
14 Loves

Edgar_Hernandez
Not applicable
Please add a flight from Chicago-Midway as well.
16 Loves