We LUV Our Troops 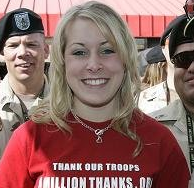 sfleming
Explorer C
My name is Shauna Fleming and I’m 22 years old. I started A Million Thanks in 2004 while in high school in Orange County, California. My original goal was to collect one million letters to send to American troops, which we reached in six months. To date, A Million Thanks has sent over five million letters overseas and continues to improve morale of service members. I recently received an e-mail from a Marine who said, “Getting letters from home means so much to my comrades and me. In fact, getting mail is more important to me than getting food.”  Now take a moment and then re-read that statement. Over the years, I have received hundreds of letters, e-mails, and phone calls from military military men and women saying how much these letters mean to them, which is why it is my goal to continue to expand this organization. To help with this growth, we want schools, businesses, and other organizations to become official drop-off locations for local communities. As long as there are troops fighting for us, we will continue to send letters.

But our troops need our support and LUV not only while they are serving abroad but when they come home as well, which is why I started a new initiative called Wounded Soldier’s Wish. This foundation raises funds to grant wishes of injured troops who have returned from the War on Terror. We are in the process of trying to grant two wishes with plenty more on the way!

Our troops risk their lives to protect our freedoms, so let’s shower them with LUV, whether they are at home or overseas!
How much LUV do you have for our troops? Join Southwest Airlines and the A Million Thanks organization this Veterans Day for the “We LUV Our Troops” campaign to send messages of appreciation to troops stationed around the world. From November 10 - 14, you will find postcards at every Southwest gate nationwide. Pick one up, write a note of thanks, and A Million Thanks will send it to our brave U.S. military men and women.

To learn more about how you can participate, visit www.AMillionThanks.org.
175 Loves
1 Comment