Welcome to My Life, Tattoo

I have only been with Southwest Airlines for a few days now, but it is easy to see how much the Employees working here LUV this Company.  But is LUV for your Company enough to get a tattoo commemorating it?

Jeff Frazier is an Aircraft Maintenance Technician who has been with Southwest for 11 years.  His tattoo story dates all the way back to his orientation, when he saw the now-retired Southwest logo on the top of his new hire training packet.  “I decided right at orientation that I would get the logo as a tattoo.” 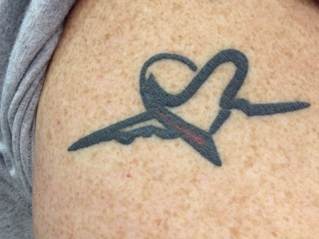 And just days after completing training, Jeff got the logo emblazed on his upper right arm.  Several years later Jeff got another tattooed reminder of his job at Southwest—in the form of a set of fan blades from a Boeing 737-800 (featured at the top of this post). 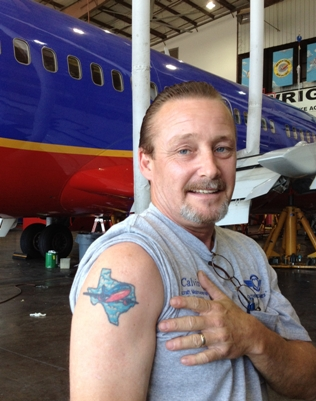 Calvin Lawrence is a Maintenance Technician and Coworker of Jeff, who also sports a Southwest tattoo. Calvin’s tattoo neatly depicts the state of Texas in blue ink, with a large Southwest Airlines jet flying over it.  When asked about people’s reactions to the tattoo Calvin said very few people are surprised by it. “Not many people know about it, and those who do just accept it.

Ashley Avanzino was a different story.  Ashley has two Southwest tattoos—and has worked with the Company as a spring Intern.  That’s right, Ashley starts fulltime employment with Southwest today, June 4.  So how does a former Intern end up with two Company tattoos?  “My mom works at Southwest Airlines and has for some time now.  And I love flying and loved interning here, so why not?” 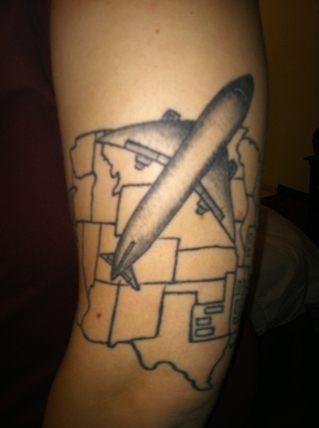 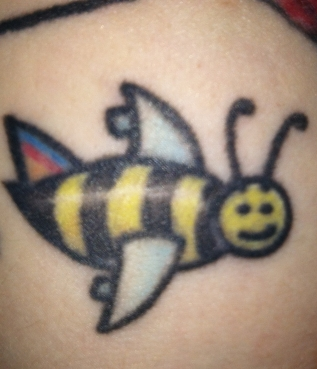 Ashley’s tattoos express her love of flying and love of the Southwest way.  Her first tattoo depicts a map of the United States with a jet plane flying overhead; the second, a bee with Southwest wings and a tail. When asked if her tattoos surprise people, Ashley told me they were completely accepted.  “I’m an aviation geek, so that helps.  And people already think Southwest People are a little crazy, so it really doesn’t bother them.”

After talking with Jeff, Calvin, and Ashley, crazy is definitely not the word I would use.  Dedicated?  Yes. Quirky?  Maybe a little.  But the more I talked to each of these people, the more I started to realize that a Southwest tattoo isn’t all that unconventional.  These Employees have invested years of effort and dedication into helping Southwest Airlines succeed.  They belong, in one way or another, to the Southwest Airlines Family.

I think Jeff explained it best in saying, “You don’t get a tattoo for thirty years down the road.  You get it for the moment.”
301 Loves
2 Comments