My son, James Bauserman, wanted to be in the military since he was four. Like all mothers, I thought this was cute, but figured he would change his career aspirations at least ten times by the time he graduated high school. Then, while James was still in school, 9/11 happened. At the time, James was a member of the Navy ROTC, and his desire to be in the military quickly became a mission. He ended high school as Commander of his unit and soon headed off to Great Lakes, MI, to complete Navy boot camp. As his Mother, I was nervous about what journey this would take him on, but understanding how important it was to him, I showed only my undying support.

James is trained as a CIWS technician (close-in weapon system, often pronounced "sea-whiz," is a point-defense weapon for detecting and destroying incoming anti-ship missiles and enemy aircraft), SAR (search and rescue) swimmer, and VBSS specialist (visit, board, search and seizure is the term for boarding tactics designed to capture enemy vessels, combat terrorism, piracy and smuggling). James spent three years in Japan in the Pacific 7th Fleet serving the U.S.S. Lassen, a Navy Destroyer. In 2010, as his assignment in Japan was ending and he was in the process of selecting his next orders, he learned the Navy had agreed to attach James to an Army unit in Iraq to lead a unit of C-RAM (Army term for CIWS) technicians. My worst fears of James going to a war zone had come true, and I became greatly concerned for his safety and mental health, as any parent would.

James was shipped to Balad, Iraq, just before Christmas 2010 for a 13-month tour. I prayed the time would go by quickly and did my best to keep busy, so as to not think of what he might be enduring. On the morning of October 21, 2011, President Obama announced all troops in Iraq would be leaving soon and would be home by the holidays. James was coming home early! James and I made contact, and he shared that he would leave Iraq sometime between October 26 and 29 and head to Kuwait. Once in Kuwait, he made contact again to let me know he had left Iraq for good, but he had no estimate of how long he would be in Kuwait. He explained that waiting for an open seat on a military transport is like flying standby, military-style.

I waited and waited but didn't hear back from James and began to wonder if he would ever get out of Kuwait. And then, on Friday, November 4, James gave me a wonderful surprise, with the help of many friends, including my Southwest Family. He had gone to great lengths to sneak back into the country and get to Dallas without any of his family knowing. Some of my Coworkers, who were in on the secret, very cleverly came up with a ruse to get me down the Main Lobby. Now, I can usually sniff these things out, but I can honestly say that it was the surprise of my life when I saw James standing there in front of me. I was literally speechless, and anyone who knows me will confirm it is no small feat to render me speechless. 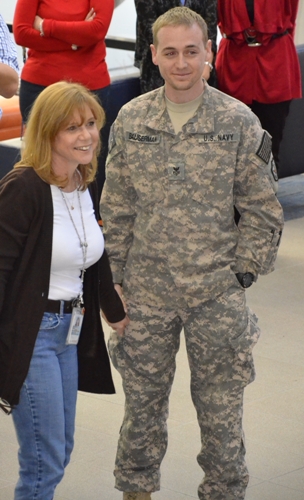 Once I had him in my arms again, I was relieved beyond tears. Just as I had done when he was first delivered at birth and put in my arms, I began counting limbs, fingers, toes, and feeling an amazing sense of comfort that he was once again back safe and sound in my arms and for this moment, we were extremely joyful to be together.  I hope all of you will be thankful for the time you have with your loved ones over the coming holidays. May you treasure every second of it! 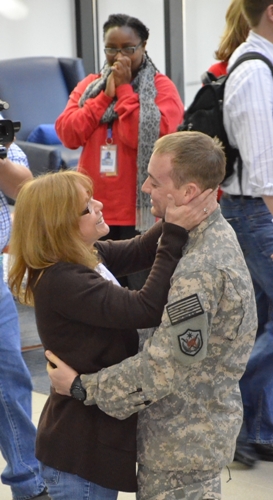