Amelia Earhart once said, “Adventure is worthwhile in itself."   What an adventure I experienced when I attended the National Aviation Hall of Fame (NAHF) Enshrinement Weekend in Dayton, OH.

The first step of this journey landed me right in the middle of the Wings of Women (WOW) Conference, sponsored by the National Aviation Hall of Fame.  Celebrating its fifth anniversary, WOW gives young women from Ohio, grades 9 through 12, the opportunity to learn and be inspired from Women Aviators around the world, and helps them develop their personal flight plan toward future goals. 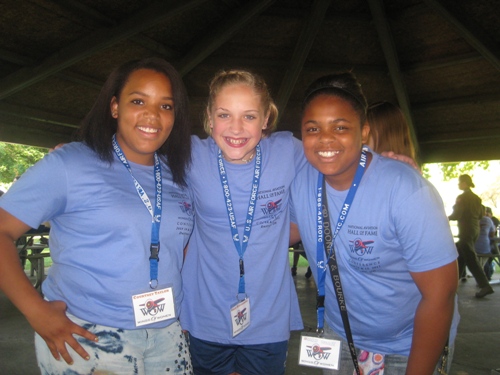 It was at breakfast when I met my new friends for the day—Samia, Callie, Abby, and Courtney.  What fun I had listening to their conversation and excitement from the things they learned the day before. The girls traveled to the Wright Brothers Aviation Center and listened to Aviation Ambassador Amanda Wright Lane (great grand-niece of Orville and Wilber Wright) share the story of her famous family’s contribution to aviation history.  They also took a bus ride through Huffman Prairie Flying Field, an 84-acre patch of rough pasture where the Wright brothers undertook the arduous task of creating a dependable, fully controllable airplane and training themselves to be pilots.  As the girls were thumbing through their course book figuring out which Women Aviators they still needed autographs from, they each shared with me their story of how they ended up at WOW. And, I must say that I learned more than I ever thought I would know about Justin Bieber.  Oh, to be a teenage girl again!

These fun, smart girls would end up being my sidekicks as our day of learning continued with the story of Harriet Quimby, the first licensed female pilot in the United States on August 1, 1911.  I was just as engaged as the girls when character-actor, NAFH Board Member, and Women Aviator Mentor, Connie Tobias, brought Harriet’s story to life as we sat beneath the infamous Bleriot monoplane—as the story goes….Harriet was flying in an air meet near Boston on July 1, 1912, she took a passenger (and organizer of the meet-up) on a flight.  Although Harriet warned the very large man not to make any sudden movements while in the air, the aircraft somehow went into a dive.  Neither the man nor Harriet was wearing a safety belt and both were thrown from the plane to their deaths.  The monoplane came out of its dive and landed with minimal damage—in fact, it looked pretty good as it hung above us as the story was told.

After learning Harriet’s story, the girls and I toured some of the aircraft flown by Women Air Force Service Pilots (WASPs) and Tuskegee Airman, and then listened as five WASP Pilots (Francis Winter Brookings, Nadine Canfield Nagel, Betty Blake, Marty Wyall and Dawn Seymour) and three Tuskegee Airman (Colonel Charles McGee, Robert Peeples and Lt. Col Charles I. Williams) shared stories about their experience being part of the select group of young Women and African American Pilots to serve our country in World War II.

They also shared some final words of wisdom for the girls:

3. Always have confidence and you can achieve anything.

4. When you have a goal, stay on track until you achieve it.

As a sponsor of the National Aviation Hall of Fame, Southwest provided tickets to fly in some of these aviation legends for WOW and Enshrinement Weekend. 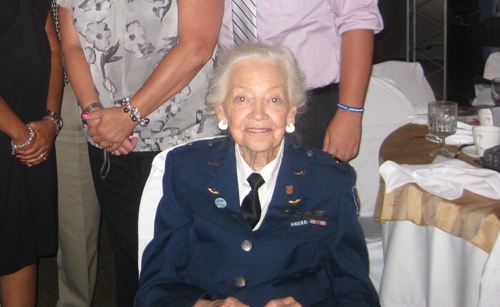 It was during our morning break that I met one of these aviation pioneers—Betty Blake, who at age 14—in 1935—learned to fly.   It was that same year that Betty attended a speaking engagement presented by Amelia Earhart at the University of Hawaii that encouraged Blake to fly.  A mentor to Betty that day, Earhart took notice of the eager girl sitting in a front row seat and offered up a tour of her plane the next morning before she took off and flew solo to Oakland, California.  That’s all it took for Betty to be hooked!   One year later—at only 15—Betty earned her commercial pilot’s license.  She began flying “hops,” taking tourists and business people from one Hawaiian island to another. Six years later, on December 7, 1941, she was scheduled to pilot one of these flights, but her passenger cancelled the reservation.  A fortunate coincidence: It meant Betty wasn’t in the skies when the Japanese bombed Pearl Harbor.  Fast forward 70 years, and Betty shared that story with a group of girls who were in awe of such a tale.

Having researched Betty’s story as I knew she was one of the mentors attending WOW, you can understand how excited I was to meet this aviation pioneer who averaged three transports a week during WWII, when factories were churning out about 45 aircraft per day.  It turned out that Betty and her traveling companion, Roxanne, were just as excited to meet me when they learned I worked for Southwest.   I no more had finished my introduction before they both began sharing their special experience on Southwest Flight #1315 from Phoenix to Columbus.  Roxanne explained when she accompanies Betty on trips, she gives a small card with Betty’s story to the gate agent, just in case they might be interested to know her history.  She is, after all, a living legend!

What happened after she handed the card to the Southwest Customer Service Agent in Phoenix is one of the greatest things about this Company—the wonderful treatment our Employees show our Customers!   The Customer Service Agent immediately shared the card with the Captain who immediately came up to the boarding area and whisked Betty in her wheelchair down the jetway.  The entire Crew welcomed Betty, helped her into the cockpit for a photo and then on to their seats in the front row, 1A and 1B.  General boarding continued and as soon as all the passengers boarded, Captain Bob stood in the front of the plane, picked up the microphone and shared Betty’s story with everyone onboard.  As you can imagine, applause filled the cabin and that was the beginning of a flight that Betty and Roxanne will never forget.  Roxanne continued on and on about how amazing the Las Vegas-based Flight Attendants, Rhonda, Jerry, and Teresa were to them during the entire flight.

“They took care of us like we belonged to them,” Roxanne said.  “Betty and I have traveled on many airlines over the past years and we have never received this kind of treatment.”   Again, this was one of those special moments that remind me of the wonderful People who work for this Company!

Having already met Betty and Roxanne, I was super excited that she would also join the Southwest table that evening at the National Aviation Hall of Fame President’s Dinner along with Columbus-based Southwest Employees Beth, Matt,  Lateea, and David.  Over 650, including top Government, Aerospace and Defense Industry Ofﬁcials, and Enshrinees gathered in the Modern Flight Gallery of the National Museum of the United States Air Force for the admittedly less formal evening that can trace its roots back to the early years of the NAHF, when Jackie Cochran would welcome her fellow Enshrinees and participants to her hotel suite after the ceremony to share a laugh and swap hangar stories.   Although the venue had grown from that hotel suite in the early days, something told me the stories and laughs were the same as those early days.  Our table was sure full of some stories from not only Betty and Roxanne, but the oldest living Tuskegee Airman Col. C.I. Williams and Aviation Photographer and Smithsonian Lecturer Dan Patterson.  It was a special evening that I won’t ever forget! 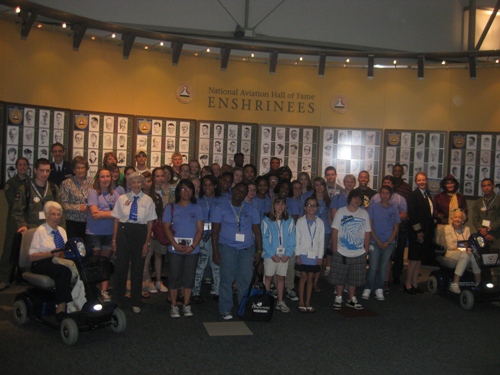 As the evening continued, several awards were announced.  The US Navy Blue Angels Flight Demonstration Team received the NAHF’s Milton Caniff “Spirit of Flight” Award in recognition of the group’s 65-year history of serving as a positive role models and goodwill ambassadors for the US Navy and Marine Corps and the A. Scott Crossﬁeld Aerospace Educator of the Year Award was presented to Sheila Condino, a physics teacher at Presidio High School in Presidio, Texas.  Using aerospace as a means to teach advanced physics to her students,  Condino provides a hands-on approach to learning.  Despite the challenge of being located in one of the most remote regions of the continental United States (the closest Wal-Mart is 250 miles away in El Paso), her students have consistently overcome geographic, financial, and logistical obstacles to compete among the nation’s brightest students at the Team America Rocketry Challenge.  You could feel the passion in her voice as she spoke about her students and her love for teaching them to work hard and have dreams.

“I feel very honored and blessed to receive this award,” Sheila said.  “Presido doesn’t have much—one grocery store and one Subway—but we have gems, our students.”  Earlier during the day, I had the opportunity to spend time with Sheila, and from our short time together, I know one other thing Presido is lucky to have—a special gem of a teacher named Sheila Condino.

It had certainly been a long, but rewarding day at the National Aviation Hall of Fame.  What a wonderful organization that honors aviation pioneers for their service to country, their ingenuity, their courage and their vision.  The stories of our NAHF Enshrinees are stories of America…of challenge and failure, of determination and triumph.   One final highlight was when I spotted Southwest Founder Herb Kelleher’s photo on the Enshrinee Wall.  I must say I’m pretty excited he founded this Company that I have been fortunate to call mine for the past 16 years!

It’s hard to sum up this wonderful experience, so I’ll quote another friend, Mia, who I met at WOW when asked her what she liked best about her experience: “Everything, just everything!”

Tragic_Sandwich
Not applicable
What a wonderful organization! I've always been amazed by Katherine and Marjorie Stinson of San Antonio--sisters who taught male pilots from Canada, many of whom eventually served in the British Royal Flying Corps during WWI. (Katherine was also a stunt pilot.) I have no idea what my own daughter will grow up to be, but at not quite two, almost nothing excites her as much as the sky. I want to find a way to take her somewhere that will let her feel like she's part of the sky. Even if she doesn't remember it later, I think she'll love it in the moment.
15 Loves