Brooks
Retired Community Manager
To compete on the world stage is an extraordinary feat.  Although every two years, I am shocked and awed by the greatest athletes on Earth, at the end of the two-week affair, I am left empty.
This emptiness is unrelated to having to wait two more years for any semblance of athleticism in my life.  The void stems from the fact athleticism is the only thing so boldly recognized by all nations.  Like an acceptance speech, the old adage goes "I'd like to thank all of the little people," as though the little people are mere stepping stones to success. These trivial acts also deserve to be recognized, and it is my firm belief that a champion must be crowned in all arenas.
So to commemorate the plain, the mundane, and the insane, the Nuts About Southwest Blog Team is pleased to present to you, our adoring audience, with what we would win medals in.
My story begins in December of last year.  Our resident "Green Queen" Marilee McInnis gave everyone in Communications each a recyclable notebook for the Holidays.  I don't have much use for notebooks, since my electronics-loving self takes my notes digitally.
So "The Notebook" sat.  And sat.  And sat.
Months later my boss, Brandy, happened upon the notebook during a visit to my desk.  At that point, I had completely forgotten its origins.  Having no recollection, of course I gave her the notebook.  I immediately moved on.
Days later, I was called to Brandy's office.  She could barely contain herself.  Turns out, she was in a meeting with Marilee, furiously taking notes in her new, environmentally friendly notebook.  Marilee had fondly acknowledged the present, mentioning to Brandy that it was nice to see her using the present Marilee gave her, even after all that time.
The jig was up.
I immediately text messaged Marilee the above picture, apologizing profusely while noting that my act, too, was deserving of recognition.  I had recycled a recyclable notebook.
So what does this all mean?  I am a serial re-gifter, and a champion at the craft.  I haven't always won, however.  Those on the receiving end of my re-gifts can explain.
Sock Puppet Champion
by Mallory O'Teter

In this world, there are the greats. The unforgettable. Keri Strug, Michael Johnson, Nancy Kerrigan, Michael Phelps. Lamb Chop. 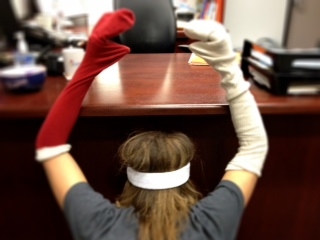 The first time I slipped that tube sock over my bladed handed and folded my fingers down in unison to meet my thumb so as to form the perfect puppet, magic happened. Since infancy (practically) I’ve been honing my skills and consequently having to use arthritis cream since age seven, but that’s all a part of the game (I digress). In sock puppeteering, I find the true talent is the altering of the voice to match each character. Charley Horse and Hush Puppy didn’t sound the same, did they?  The art of finding different voices within you to project through your sock puppets is something to be admired. Obviously. 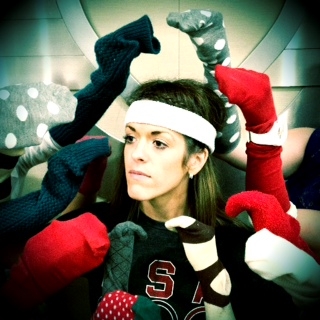 The only person I wouldn’t want to see in the finals? Mick Foley’s Mr Socko. Google him. Or not. It’s weird.

For my Sport of choice, I choose cat photography.  Meow not just ANY basic feline photography…I mastered that practice years ago when Jack Bauer came into my life.

Lately I’ve been getting really into Laser Cat Photography, with my favorite iPhone app Cat Paint.  Yes, it’s $.99 in the app store, but well worth your money.  It gives you the ability to send your friends photos such as: 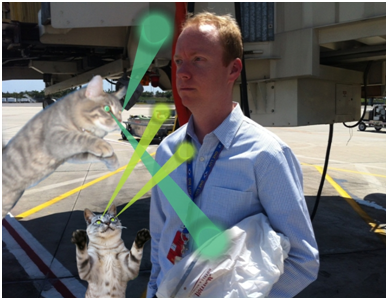 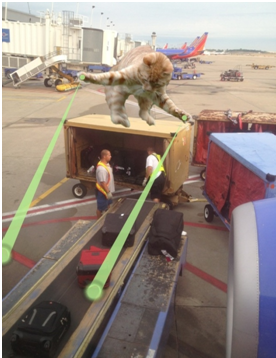 If Laser Cat photography held competition on the world stage, I think I’d definitely be in the running for the Gold.

True Road Warrior
by Capt. Joe Gautille
At this point in my aviation career I think my event would have to be "Road Warrior." Which pilot can be gone the longest and stay in the most hotels during the yearly competition? I have developed the finely-honed skills of staying in hotels all over the Southwest domestic route map, and in a pre-Southwest life, hotels in countries all over the world. 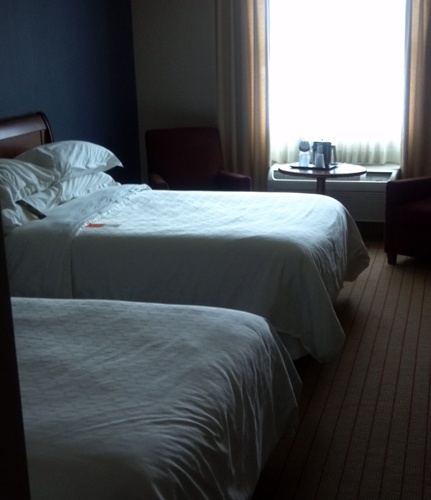 To compete and train as a Road Warrior, you need to stay in hotels hundreds of days per year and belong to multiple hotel chain reward programs to stay in tip top shape. While Southwest Airlines is a healthy and steady workout (our monthly schedule might be between 10-15 nights per month), as a corporate pilot I averaged over 232 days per year on the road and was a competitive tournament-level Road Warrior.
During one stretch of training, we left our base in LAS in the beginning of September and returned in early December. Living in hotels for over 90 consecutive days will build your Road Warrior endurance for the world champion trials. When you begin to know all the hotel employees by name, how many kids they have, the restaurant and room service menus by heart, and have your clothes dry cleaned or use the courtesy hotel laundry, you are building those Road Warrior skills for the big Games. I began to hear the echoes of the Carol King’s lyric in So Far Away, “I sure hope the road don’t come to own me,” but I knew it was too late; I was becoming a consummate Road Warrior. 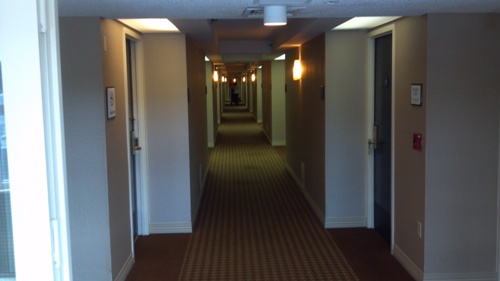 So now in the latter stages of my aviation/road warrior career, the Southwest three-day trips are a perfect pace to test my endurance and the 4 day trips push me a bit too far, but when you’re a professional hotel guest and Road Warrior it’s what you do.
Sent from... where else? On the road in PVD
Useless Information
by Krista Crow
There are so many things I am good at; procrastination, sticking my foot in my mouth, embarrassing my children, and the ever popular: reading anything I can get my hands on.
Of course, none of these seems as medal-worthy as my ability to know useless bits of information.
I am best at thinking up the most obscure questions and then using Google, Wikipedia, or any other mildly reputable means necessary to find the answer.  Of course, my ability to be able eto ask any question to anyone, at anytime, is not always popular.  For some reason it just doesn't matter; I have to know the answer.
This hasn't always worked out well for me.  Like the time I asked a security guard at the Smithsonian Museum in Washington, D.C. if anyone had ever tried to steal the hope diamond.  With a very stern look, and a gruff voice, he informed me that, "No, no one has ever tried and it would not be advisable for anyone to try."
I mean, you see it in movies being stolen, so I just wondered if anyone had ever really tried it?  Watching London '12, I also wondered if, when Queen Elizabeth abdicates the throne, will the National Anthem change to God Save The King?  I asked my husband, who just shook his head and asked, "How do you come up with these questions?"
So I Googled it.  In the spirit of not ruining the results via something akin to tape delay, I'll let you Google the answer yourselves.
Changes in Latitudes = Changes in Attitudes
by Paul Thompson
Growing up on the Texas Gulf Coast, I was exposed to boats of all types – from bass boats to shrimp trawlers, and sailboats to oil tankers. I’ve always loved being out on the water, whether it be river, lake or ocean. 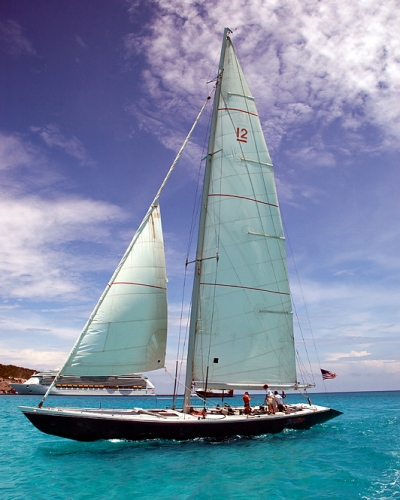 Around age 10, my Dad began taking my brother and me on guided whitewater rafting trips in New Braunfels, Texas. While most people cruise the Guadalupe River in inner tubes, during our first trip, the river was at flood stage, and we had to wear helmets! A couple of years later, he took me rafting on the Rio Grande in the canyons of Big Bend National Park, which gave me my first sense of the true natural beauty that can be found in Texas.

Later on in high school, my friend’s parents owned a 30-foot sailboat that we would take out in Galveston Bay frequently. While in college, I taught sailing to elementary and junior high students at a summer camp on Lake Travis near Austin, TX.

My all-time favorite sailing experience was a true race! While visiting St Maarten during a Caribbean cruise in 2004, my wife and I got to sail on “Stars & Stripes” – which won the America’s Cup in 1987. We raced against “True North” which is another world-class racing yacht. We participated as crew members and were each given a task during the race. It was quite a workout, grinding winches for an hour – but SO much fun!

Apart from flying, I can’t think of anything more liberating than sailing – with the sun, wind, and ocean spray hitting you right in the face! If you’ve never sailed, you must try it if you’re given the chance. 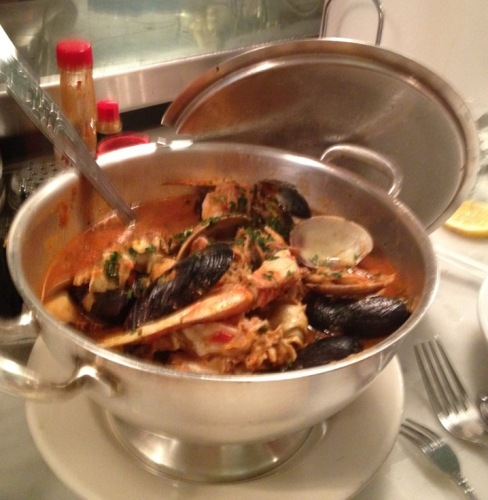 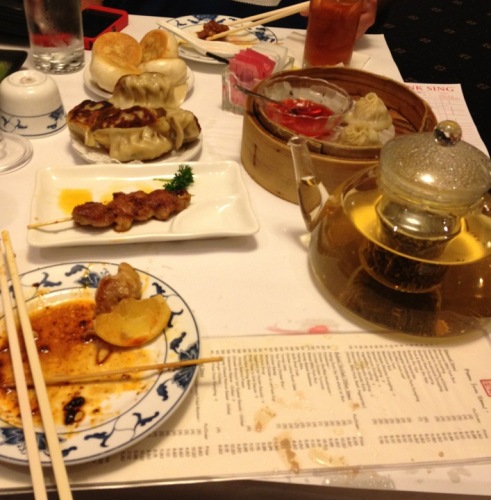 And the motherload…..Southern food at Mary Mac’s in Atlanta’s Buckhead: 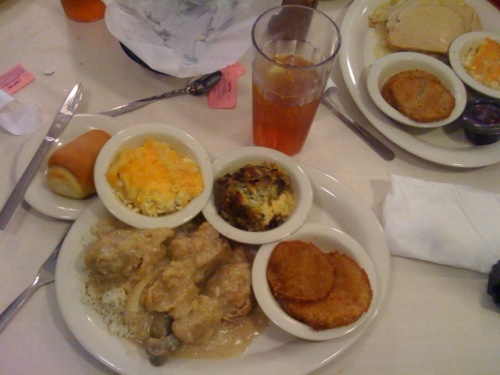 So absolutely—I’d win.  The judges would LUV me.  Which is good, because our next appearance together would be on “Extreme Makeover:  Weight Loss Edition.”  But that’s a subject for another blog piece.

Okay, I know that I could have picked a loftier goal in which to compete for the title of world’s best—or should that be “word’s best?”  However, my brain is wired differently than most people, and I think I have an exceptional skill of crafting punnage—or to my delight and the dismay of those who know me—PUNishment.  Nothing like letting an unexpected pun fly to a chorus of groans.

After winning a long series of e-mail pun wars, I know that I could compete against the world’s best punners.  My event would be the Marathon Pun event.  Seeing how long the chain could be without a repeat would be a puno a puno test of mental acumen against the best punners alive.  For example, this test of endurance and mental agility could start with a subject like “tuna,” and I would have a “salad” day, leading to a first-place FINish, without getting sick to the “gills,” but still tipping the “scales” of pun-skill in my favor.  With that kind of ability, I should be able to teach a “school” how to create puns in a SWIMmingly manner.  In my world, if you can’t pun, you are a “fish” out of water.  But if you “can” pun, it’s as tasty as “caviar.”

I see it now.  There I am, standing on the medal podium, holding my gold medallion as the “Star Spangled Banner” plays.  It would be the PUNacle of my career.  Maybe I could get my picture on a box of cereal or a thesaurus endorsement.  Hey I can dream, can’t I?