Employee
Southwest is a proud sponsor of the Sundance Film Festival, and part of that sponsorship is being able to see the fruits of our labor during festival week. The following is a live chronicle of what the Southwest Sundance Team is doing out here, along with a few completely unrelated anecdotes along the way.
Wednesday, January 25
4:23PM
My time is winding down.  The end is nigh.  What a great experience this has been.  The winter air is biting, but the scenery is beautiful.
Last night, I caught the movie GOATS, directed by Christopher Neil.  David Duchovny plays "Goat Man," a botanist in Arizona who watches over Ellis, a teenager getting ready for prep school (is that redundant?) and caught in the middle of separated parents who can't see eye to eye.  That's my abbreviated, amateur summation, anyway.
Tomorrow, I'll be sharing a plane ride with Mr. Neil, primarily taking your questions via Twitter, and also asking a few of my own.  You can follow along by searching the hashtag #GOATS, or by simply paying attention to our @SouthwestAir account.
In the meantime, I'm about to head to Main Street for a bite to soak it all in one last time. This place is brimming with art and culture.  If these walls could talk... 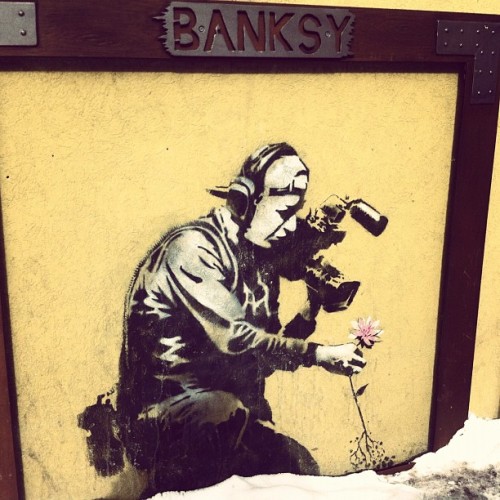 A Preserved Banksy Piece, Near The Egyptian Theater
- Brooks
Tuesday, January 24
1:25PM
We're regulars now.  I walk around waving to the locals, expecting them to wave back (some do, most don't).  It's been really cool to see Southwest integration in several films, and around the festival.  Most recently, we got back from volunteering with several Southwest Employees at one of the holding tents, where ticketholders and waitlist hopefuls stay warm.  We handed out peanuts, pretzels, and a chance to win roundtrip tickets on Southwest (good luck, everyone!). 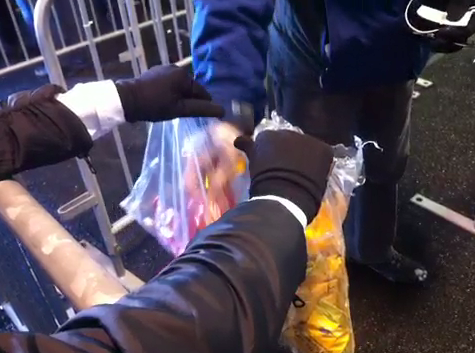 Sunday night, we sponsored the Sundance Late Night Lounge, a place where filmmakers and their constituents were able to relax, mingle, and talk about their industry. 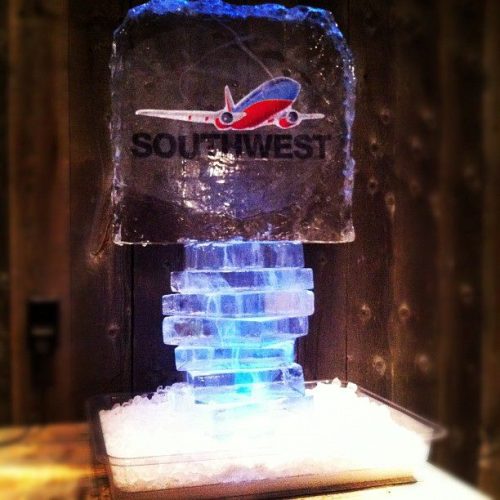 Tonight, I have the privilege of attending the world premiere of GOATS.  Thursday, I'll be sharing a plane with the film's director, Christopher Weir, and conducting a live tweetup.  So if you have any questions for Christopher, be sure to leave them in the comments section, or use the #GOATS hashtag on Twitter.
- Brooks
Sunday, January 22
12:45PM
Last night, we continued our Sundance experience by sponsoring a Happy Hour and an exclusive s, creening of the film Robot and Frank.  The crazy blizzard outside did make for a challenging drive for some, but it didn’t keep the die-hard film buffs and Southwest fans from joining us for this fun evening...but seriously the weather was nuts!  Kudos to Today’s Mama for helping us host a fun Recharge Happy Hour at the Blind Dog restaurant.  All attendees received an awesome swag bag, which included sweet headphones, iPod speakers, Southwest peanuts, local cider beer, and festive Utah popcorn.  Here’s a pic we snapped before Whitney ate all the popcorn: 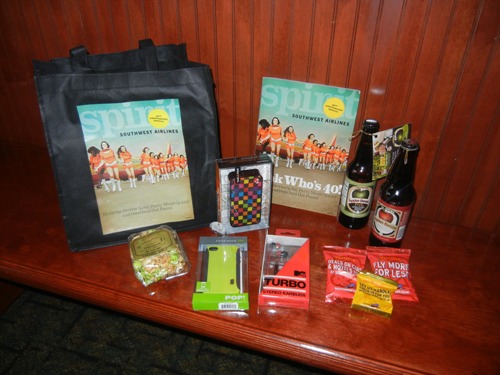 At the film, Ashley Dillon welcomed our guests and gave away roundtrip tickets on Southwest to two lucky attendees…you can probably imagine the craziness that ensued when she told everyone to look under their armrests for the tickets! 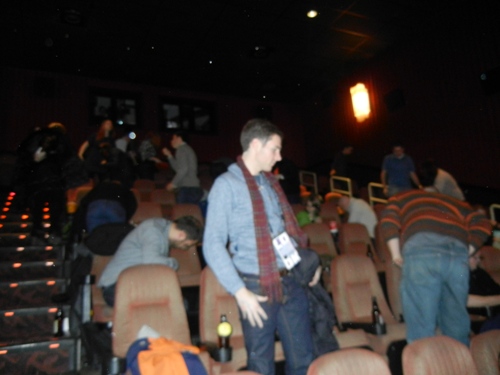 The film itself was a sweet story set in the future where people hire robots as personal assistants, health care aides, and librarians!  It was thought provoking, endearing, and witty (and definitely made me want a robot someday).

Well, Brooks has his Cousin Eddie hat on which means it’s time for us to hit up Main Street to give away more tickets to films throughout the week!  Follow us on Twitter if you are interested in snagging some!  Check ya later! 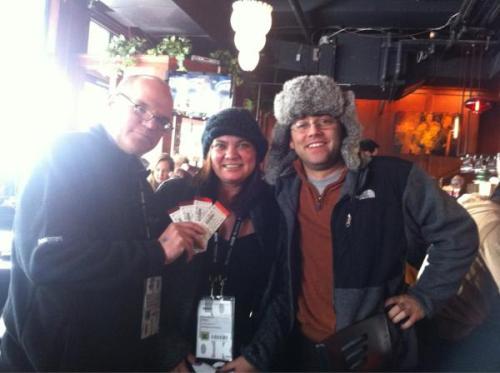 Saturday, January 21
10:38AM
We awoke to a blizzard. Yesterday, the mountains were crystal clear in the distance, and today, they are clouded by a constant snow.  I appreciated the mountain view, but this wintery aesthetic is equally inviting. 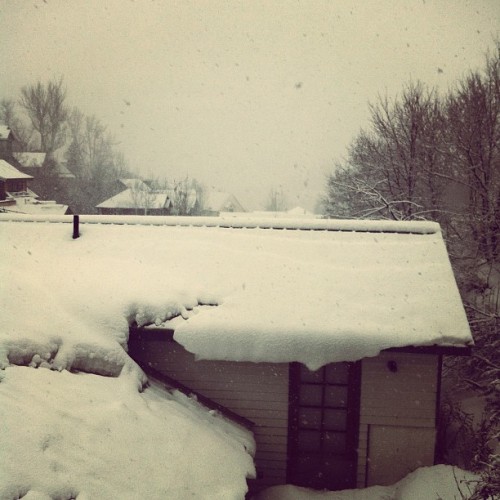 Last night, we told you (and showed you) a little about our integration into Sundance. We were also honored to be able to attend the world premiere of Celeste and Jesse Forever, starring Rashida Jones and Andy Samberg. 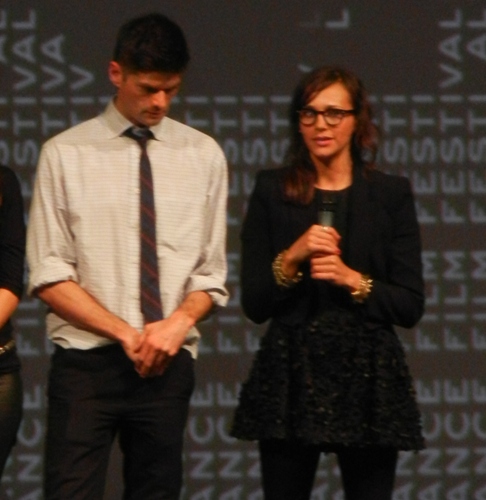 Rashida Jones, who co-wrote the film with Will McCormack, explained the film was about, "Our definition of happiness, and how it doesn't always end up being what we thought it would." 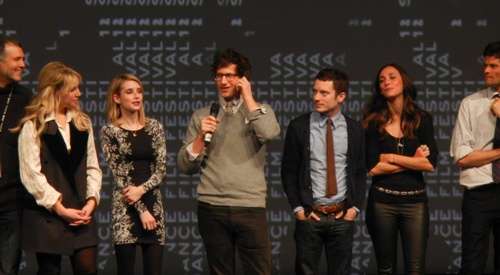 The cast of Celeste and Jesse Forever (minus Rashida Jones, who is far right)
Next week, our own Stephen M. Keller will shoot a short documentary about the film's director, Lee Toland Krieger, as he travels to Boston to showcase his film.  We're so excited to host such a unique experience on Southwest.
We're also putting the Southwest experience on the ground, like you saw yesterday with our Egyptian Theater integration.  We have these signs (pictured below), to help direct ticket holders, pass holders, and film-going hopefuls.
. 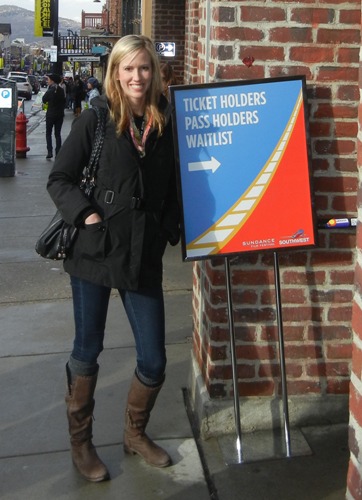 Tonight, we're going to host Customers, and Southwest Friends & Family, at a happy hour and private screening.  More to come on that later!
- Ashley Dillon
Saturday, January 21
12:08AM
Whew. Time flies.  We've been to headquarters, walked past the Egyptian, and got our Sundance bearings. Also got a little glimpse of the street life (a piano man and violist, and a puppeteer). Very cool.  It makes sense after thinking about it, but I originally didn't anticipate so much abstract art to be going on.
Time for bed, but as promised, here's a little glimpse at Southwest's Sundance influence: 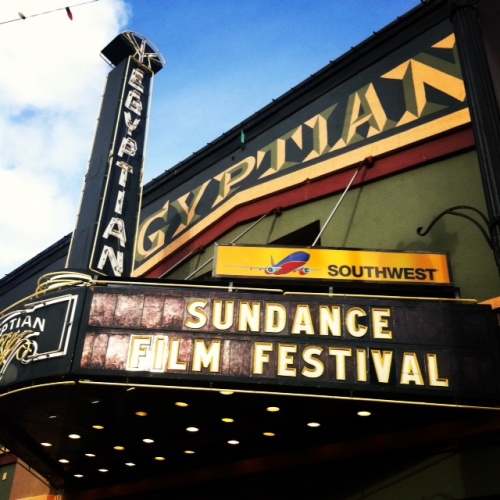 'til tomorrow (or later today, as it were!).
- Brooks
Friday, January 20
1:34PM
We've arrived. There's a lot of snow on the ground. We took a shuttle from SLC to Park City, and played a mean game of Catch Phrase on the way.  Fred, who drove us, is a gamer; a true Catch Phrase encyclopedia.
We're now planning to visit our space at festival headquarters (complete with charging stations and our business seats), and also the famed Egyptian Theater, which is apparently decked out with a Southwest Airlines theme.  Having never been here, this is all awesome and exciting.  Can't wait to see what the main drag of the festival looks like.  I'll be back later, with pictures!
By the way, don't forget to enter our Viddy contest!
- Brooks
319 Loves