I've been flying frequently to EWR from DEN for several months now (2-3 round trips per month over last 12 or so months). I can only honestly recall departing on time twice maybe three times in all the flights from either DEN to EWR or from EWR back to DEN.

I understand ATC (due to weather, etc.) controls who gets to depart/land where/when. And I understand that safety is a priority, as it should be.

However, since these delays are common, well-known (now and I'm guessing they've been for years), wouldn't making this info available someway, somehow be of value to flying customers? That is, when someone is booking a flight, I think it could/would be awesomely informative and helpful to know there is only say a 10% chance of departing/landing at the posted times.

I'm told and understand the FAA requires "times" to be posted (and to some extent controls what can and can’t be posted). Still, I've always found SWA to be a "different" airline, not different for the sake of being, but for serving their customers better than other airlines. I'm wondering if they ever considered helping their customers by posting some form of this “probability” information. Perhaps this data is already available and I'm not aware yet of where it resides. If so, I'd love to learn about it.

On a related note (perhaps should be a different post), I can't help but wonder too if these "delays" are in some way "avoidable" or at least could be less frequent. That is, if flights to/from EWR are known to be exceptionally frequently delayed, could it be due in part to the way flights are scheduled (linked up)?

I'm wondering if a traveler might be willing to book a flight that has demonstratively been shown to have less delays to a destination (ex. EWR) due in part to "different" scheduling decisions? Travelers pay a bit more to be seated "first", or to get a bit more "leg room." Would flights that demonstratively show a higher on-time departure/arrival be a marketable value (due to “different” way of scheduling them that reduces the probability of delays)? Could it help make SWA more different, and better than other airlines?

Just thinking out loud here, as I have lots of time due to my latest delay to EWR today (now looking like it will be nearly 5 hours, the worse one yet).

When you are booking a flight and want information about it click on the flight number in blue text when searching your flights.  This will show you what type of aircraft how many seats and delay times.

I have heard that Newark, NJ airport is one of the most delayed routes on the east coast because ATC give priority to other NY airports. 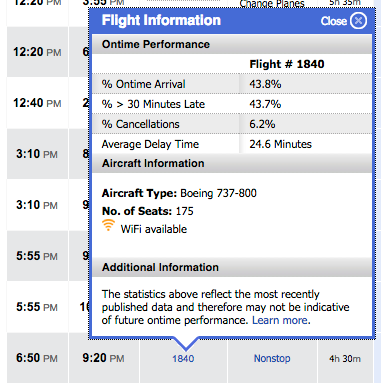 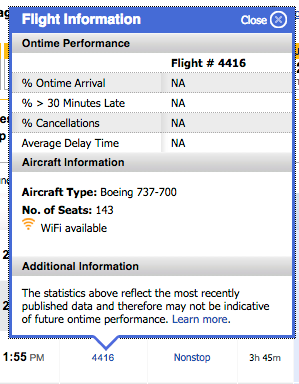 Not after booking. With each schedule release. 😉

Thanks for the replies. Knowing about this info and how it changes is a nice start. BTW, the following week, the flight out of DEN left “on time” and it arrived at EWR about 20 minutes early. Coincidence or “lucky stars”? And I know the inbound flight didn’t come from the city it came from week before, when it was delayed over 6 hours.

The schedules are padded. 😉

Well, my luck was short lived 😞

Flight from EWR to DEN this evening now 3+ hours delayed. Wondering if flying into PHL and driving to Newark area might provide higher probability of arriving/departing with less delay than coming into EWR directly.

At the time I looked, EWR faring slightly worse than either LGA or JFK.