Hello, active duty military here that travels commercially on a routine basis. I’ve travelled on official orders, and as a civillian on every major US airline, many times.

After being stationed in San Diego roughly two years ago I’ve been forced to use the DOD contract carrier here for most of my flights, which happens to be Southwest. My conclusion is that during official travel, SWA is by far the worst airline to fly on.

Heres why: SWA does not allow customers who have booked military flights for officially travel to check-in online within 24 hours like every other paying customer. This means that you are not assigned your boarding group until you physically check in at the airport, guranteeing a late C group.

Please someone explain how this is fair to not allow an entire group of flyers, let alone military travelers who are likely flying to serve the country in some capacity, are not allowed the same opportunities to check-in early as everyone else.

No other airline I’ve flown on has ever treated military so horribly, but unfortunately I’m stuck with SWA when flying on orders to/from certain contract locations. Nearly every military member I’ve discussed this with in San Diego shares the same thoughts as me and shares these feelings. I actively avoid flying Southwest for personal travel and have submitted complaints through the DOD to have their contract reviewed. Hopefully something is done about this.

I’m not asking for Southwest to allow active duty preboarding, but simply allow us to check-in like every other customer.

For official travel we are required to use a contracted travel agency that makes contact with the airline and books everything for you using your Government Travel Card. After booking your flight they send an itinerary which has a 6 letter booking locator (which is needed at the check-in kiosk) and a numerical ticket number.

When I attempt to check in online, it informs me that military fares must be checked in at the airport. The only reasonable reason I can see them doing this is because they check your military ID. However other airlines I’ve used had no issue with online check-in, and simply had me show my ID while dropping off luggage.

Here is is a screenshot regarding this from SWA website: 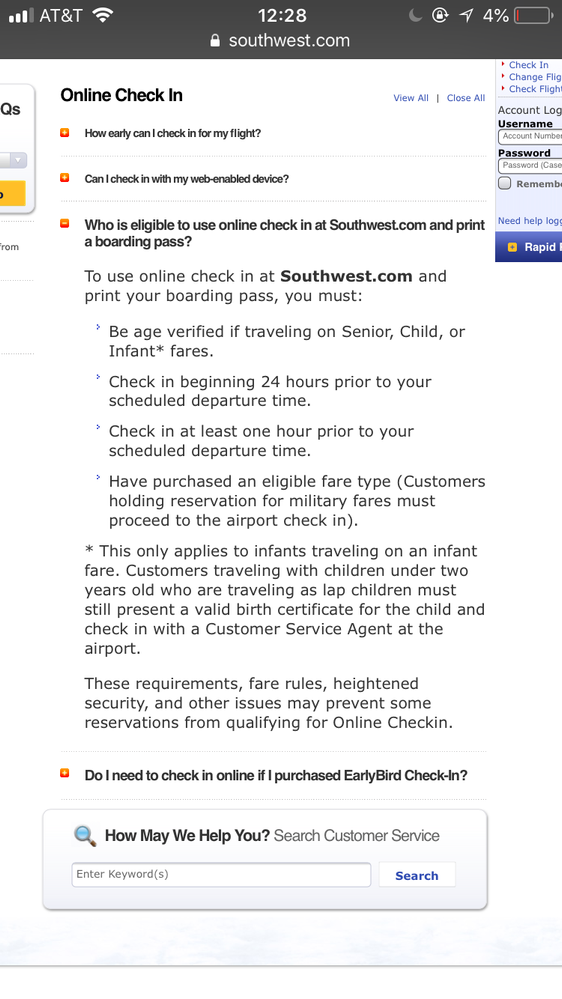 No where does it explain why military fares must check in at the airport, and customer service reps I’ve spoken to at the airport have been unable to provide a reason.

Since you're in SAN, I'm guessing you're either U.S. Navy or Marine Corps. Either way, thank you for your service.

Your situation would be frustrating to any traveler but should definitley not happen to members of our military. Given Southwest's solid commitment to veterans, I can't imagine that this is a Southwest policy and wonder if it has something to do with the terms of the DOD contract. It is certainly worth looking into and correcting.

I hope that the situation is adequately explained and, hopefully, resolved, for you and your fellow service members.

Good luck to you!

Unfortunately, it does appear to be a Southwest policy.

Who is eligible to use online check in at Southwest.com and print a boarding pass?

To use online check in at Southwest.com and print your boarding pass, you must:

Note that, at the discretion of the OPs agent, military in uniform may be allowed to board between the A and B groups.

I’m sure Southwest has a reason for this policy and I still wonder if it has something to do with the terms of the DOD contract. I can’t imagine Southwest intentionally denying military personnel the opportunity to get a good boarding position.

At least there’s a policy in place to allow them to board between the As and Bs.

Yeah, I’m sure Southwest has some sort of reason for this. Hopefully it’s not them taking advantage of the fact that military travelers on official orders have no say in what airline they use.

Unfortunately I believe that this is the case, like I said SWA is the only airline that places a negative restriction on military travellers. Additionally, my service branch and most others have a policies that do not allow us to travel in uniform, so I honestly believe that the uniformered boarding policy is nothing more than a publicity stunt from SW.

Lastly, I flew from Oakland to SD yesterday and had yet another confirmation of how this process is affecting military. I met 4 marines during the boarding process flying on orders, guess where I met them? At the very end of C group. We were the last 5 to board the plane and received the worst seats subsequently. Sad that as they travel to SD for processing before a overseas deployment they are treated this way.

I have been encouraging all of my members and fellow service members to submit formal complaints against Southwest because of this policy (which has never been explained to me). Hopefully after years of complaints they will have their contract reviewed or cancelled. Any servicemembers reading this, please submit a complaint via your logistics after every flight on SW.

Yeah, that used to be true. These days, I'm not so sure.

While I do not know what the actual reason is for this policy, over the last few years there have been quite a few policy changes, many allegedly caused by "system limitations," that negatively effect the customer.

Confirmation numbers, needed when reusing travel funds, are no longer detailed on email confirmations when using those funds, or show the remaining balance, and cannot be researched by phone reps using the credit card number.

Southwest actually took legal action against Award Wallet, a site that helps flyers track their own earned awards. (Southwest benefits when customers don't use their funds/awards.)

Refundable fares now become non-refundable if you make any itinerary changes. (This one is absolutely the most absurd to me.)

Customers outside the US have been blocked from accessing the website for three years now. For three years Southwest has said that they are "working hard on a fix."

Customer Relations reps are less empowered than ever before, due to management directives of "zero tolerance" enforcement on policies like no-show and expired points (among others).

Rapid Rewards points have been devalued multiple times since the move to the revenue-based system. Early Bird Check-In fee was $10, then $12.50, then $15. (And will likely increase again, I suspect.)

Every changes seems to continue to be customer-negative. Aside from allowing A-Listers to board at the end of the B group if they don't have an A position, I cannot think of a single customer-positive change that's happened in the last several years.

Southwest used to be head-and-shoulders above the competition.

I disagree with any policy that penalizes our service members. Moreover, being known as military-unfriendly could quickly become a marketing nightmare for Southwest if left unchecked. @FlemingUSCG, you are doing the right thing by encouraging other service members to make formal complaints. I hope that the situation will be resolved to your satisfaction and hopefully Southwest will regain your favor.

@chgoflyer, the Southwest policy changes you mention seem to be endemic of the industry as a whole. While it's a shame that loyal Customers feel that the Southwest they knew and love has gone away, in the bigger picture, they are still better off flying Southwest than the Big Three, Spirit, Allegiant, or Frontier (speaking of an airline that has completely forsaken its loyal customers). I say this as somebody who comes from within the airline industry and has seen both customer service and employee satisfaction plummet in the last 20 years, EXCEPT at Southwest.

Have you discussed your concerns with somebody at Southwest? As an A-Lister (I'm assuming) and community ambassador, it seems that Southwest would be very open to your opinions.

The air travel industry is definitely in a race to the bottom. And while Southwest may be bringing up the rear, they're unfortunately still running in it.

Southwest definitely does many things right -- no change fees as a great example --  but the company they are these days is simply not the company they were 10 or 15 years ago. In so many ways. And that's sad. It would be one thing if the cuts were all necessary to keep the company alive, but as we know Southwest has remained fantastically profitable -- even setting new records for shareholder return in recent years. Profit has become king.

I'm certain they are well aware of the concerns I've expressed here, as I'm far from the only one expressing them. Unfortunately, customer opinions don't really have much effect on policy anymore. With a couple minor exceptions, management is calling all the shots these days, and the financial bottom line is really the only motivator for most decisions.