I have been receiving offers from Southwest about a 50,000 rapid rewards after spending $1000 on purchases in first 3 months for a while. Since I recently moved it made sense for me to apply for this card using the invitation code on the offer I received in the mail.

I don’t spend too much and my living expenses are pretty low so the offers I’ve seen online for 75,000 points after spending $5000 do not appeal to me. Unless I was able to pay rent with my credit card without a fee, there’s no way I could spend $5000 in 3 months.

Today I received my card in the mail and didn’t see anything referencing the offer that enticed me to open this card so I got a little worried. I downloaded the app, poked around and nothing. I called the 800 number on the back of the card and was told they do not see the offer I’m referring to but that they have an even better offer and mentioned the 75,000 point offer which I did not want. I explained to them that I had signed up using the offer from Southwest and basically ended the convo with no resolution. They told me to email using their secure platform and to send the photo of the offer I received. I did all this and now I’m just sitting here feeling annoyed and worried that this won’t be honored.

Have any of you signed up using the invitation code on a Southwest Mail Invitation and experienced something similar? Did they honor the deal?

I have actually been very impressed with the Chase app and it's promotion trackers showing what my spend threshold is and my progress towards it for each of their cards I have.  If you're not seeing that in the app then perhaps you do not have a promotion associated with your card.  Seems that the person you spoke with agrees.  I can't say I've applied via the mail for a card since the late 90's and would recommend you apply online next time.  It's much quicker and ensures the promotion you want is applied to the account.

FYI, here's a picture I was able to take of the Chase app showing the "new account bonus" section right under the list of recent transactions.  As you can see it shows what you have spent and what you need to spend.  This picture is not showing a Southwest card, but another Chase card I recently obtained.  The Southwest card showed the same tracker when I received it.  The Chase app wouldn't let me take a screenshot so I apologize for the blurriness. 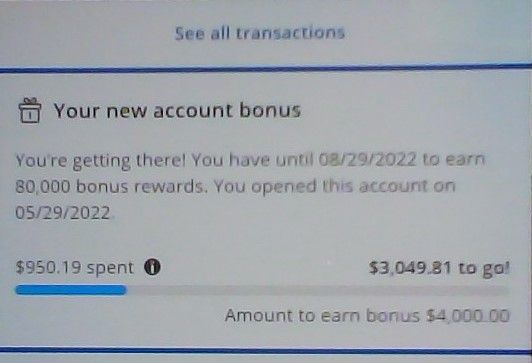 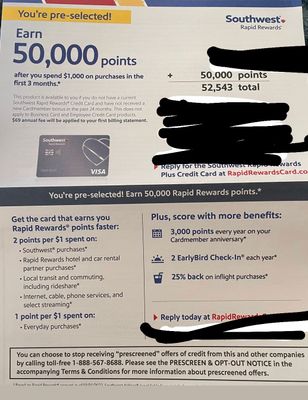 I applied for the card online, I don’t think you can apply for credit cards via mail anymore. I meant that I received a prescreened offer via mail from Southwest and have been receiving this same offer for months.

I applied online using the invitation code on this mailer and they are saying this promotion doesn’t exist but that they have a promotion for 75,000 points if I spend $5000 in 3 months.

Maybe there was a timing issue if you didn't apply right away and the offer was different then?