8/14/2022: we were flying out as Colorado springs - Denver - Phx. Since  flight to Denver was missed and we would have missed the connecting flight to Phx. We were rebooked as Colorado Springs - Las Vegas - Phx.

Colorado to las Vegas flight no. 1277 was actually scheduled at 7:25 pm. I got notification that flight was delayed to 8:35 pm. We were having dinner and I accidentally scrolled through the flight tracker  around 6:15 pm and it said, flight was departing at 7:09 pm. We were like they preponed the flight! We didn't get any notification. I come to the gate asking for help from customer representative and she said, :yes it was 7:09, I don't know why it is not the display. It was here few mins ago". There is chaos as other passengers are having same issues.

Few minutes later, it shows flight no. 1277 departing from Colorado spring to Denver. The customer representative at gate said she had no idea on what was going on.

I called the customer representative at southwest and he told me flight was departing at 7:11 from gate E15. For the record, there is no such gate as E15 at Colorado springs Airport. Then he said there are 2 flights with no.1277 and he needed to check with the his help desk on what was going as he was confused. I told him, I am not responsible for missing flight as there is no accurate response from them. Fast fwd. He said flights were diverted that caused confusion. The flight will be departing at 9:28. I don't see any delays, so tou should be fine.

The flight was supposed to come from Denver to Colorado Springs and then take off to Las Vegas. However due to inclement weather, it skipped Denver and came directly to Colorado springs.

Now, during all this even after 7:11, we are getting messages flight is delayed at a time that has already passed and delayed at later time also. See the images for conflicting information.

Then, they cancelled the connecting flight of bunch of passengers as a we didn't board the flight of 7:25 which never came to the gate.  So there is this line of passengers at customer representative again to figure out what the he'll is going on. She said it's error and they have fixed it  look into your app for updated boarding pass.  I look up for my boarding pass and it shows departure is from gate E15!  Waiting in line for several minutes, the gate is changes to C11.

It's just chaotic how things are handled. The customer service is a hoax, compensation is a distant thing, there was no remorse or verbal apology made for the inconvenience. There were passengers whose flights were delayed for over 12 hours and there was none till next day.  They wouldn't provide accomodation to them!

Our flight was delayed further to 9:50 pm, 10:20pm. I wonder if I am reaching home anytime soon. I will update the posy with final take off time.

. I wonder if I am reaching home anytime soon. 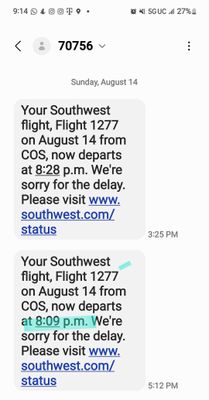 Re: Delayed_cancelled_Delayed_confused reaponse on flight status

Hi @20308969973. So sorry to hear about your experience, it's definitely not the usual or typical experience on Southwest Airlines. I am concerned that the proper department to assist you isn't monitoring this particular chat as it's related to the Careers Section at Southwest. Most of the users of this particular section are external Candidates for jobs at Southwest and are not Employees and are not affiliated directly with the company. May I suggest copying your post and sending it by email to Southwest Airlines at the Southwest.com "Contact Us" section. I have copied the link below for your convenience. I hope this helps and I wish you a great day.

Re: Delayed_cancelled_Delayed_confused reaponse on flight status