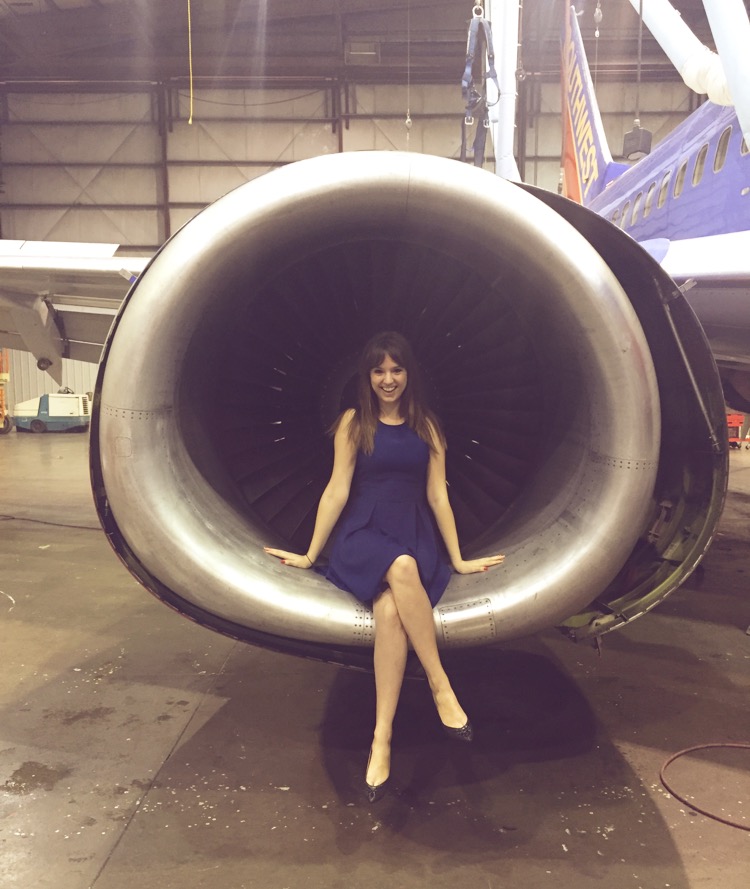 Re: Our October A-Lister: Amber Chavez

by mkaleta |
Active Member
in Blog
So cute! ... View more

by mkaleta |
Active Member
in Blog
3 Loves
3 Loves
Matthew Wright still remembers his first time flying solo. He was 16. He had been taking flight lessons in Addison, Texas, a few times a week. After a lengthy ground school course and 20 hours of instruction, his flight instructor, Dale Lenhert, decided it was time for Matthew to begin flying by himself. “But of course, Dale didn’t give me any advance notice,” he says. “He unplugged his headset and reached for the door handle before telling me to come back after three touch and goes.” The door slammed shut, and Wright was immediately terrified. “Then the adrenaline kicked in, and I headed for the runway,” he says. “That was still one of the best days of my life. Flash forward nearly 17 years, where Matthew found himself under the instruction of Dale once again. This time, however, he was Matthew’s Simulator Instructor for Southwest. “It was pretty cool to have my first flying instructor guide me through my last formal training program as a professional pilot,” he says. “It was fitting that he trained me for the job that was just a mere aspiration when we met 17 years ago.” But in reality, Matthew’s dream of being a Southwest Pilot was more than just a wishful thinking. He grew up in a Southwest household—his father Frank Wright was a Southwest Pilot for 28 years. While he says he never made an official proclamation that he wanted to follow in his father’s footsteps, it was generally understood by his family that working for Southwest was what he wanted to do. “I got to watch my father do what he loved to do every day,” he says. “I guess it was contagious because it’s been the only thing I’ve ever wanted to do.” After completing his Private Pilot’s License at 17, Matthew attended the University of Oklahoma where he participated in their Aviation Program. While there, he completed his Instrument Rating and Commercial License in addition to his Bachelor's Degree.  The summer prior to his senior year, Matthew completed his multi-engine certification in Dallas and was hired to fly cargo in a small twin engine airplane until he graduated in 2006. Under Dale’s instruction, Matthew watched his dream of flying for Southwest become a reality. “Our relationship as instructor and student came full circle in a way that few relationships do,” he says. “Dale is very meticulous and thorough: two great qualities in a flight instructor.” He says it was Dale’s gentle nature and wealth of knowledge about the 737 and the way Southwest operates it that made his experience as a New Hire enjoyable. He says he’s looking forward to working for the Company that inspired him to be a Pilot, the Company that he grew up admiring. “I've always felt proud of Southwest, and I'm happy to now work here and contribute to its success,” he says. “Flying is the best job in the world, and I'm very excited to get to do it for Southwest Airlines.”   ... View more

by mkaleta |
Active Member
in Blog
1 Love
1 Love
Working as a Flight Attendant means spending a lot of time in the air, but Salvador Pineda has a surefire method for staying grounded. “I’m a huge fan of yoga,” he says. “I believe that being adaptable, flexible, and accepting is essential both on the yoga mat and at 38,000 feet.” These attributes have been apparent in him throughout his time at Southwest. Salvador will celebrate his fifth anniversary with the Company next month; he worked as a Ramp Agent and Operations Agent at the Norfolk/Virginia Beach airport before becoming a Flight Attendant in 2014. He says these prior experiences gave him a unique perspective that he’s been able to apply in his current role. “I’m really grateful that I’ve had the opportunity to grow within the Company,” he says. “I understand the big picture, and that allows me to do my job as efficiently as possible.” Being a Flight Attendant isn’t always predictable, and for Salvador it’s about more than passing out snacks and drinks. “First and foremost, I am a Safety professional and first responder,” he says, adding that Southwest’s dedication to Customer Service is also his priority. “I have the opportunity each and every day to share Southwest’s Hospitality with our Customers, which gives me an immeasurable sense of gratification.” Salvador recently had the privilege of sharing the Southwest Spirit on a flight from Baltimore/Washington to Denver. “I arrived at the airport and realized I would be working an Honor Flight that was filled with WWII veterans,” he says. “They had just returned from a reenactment in D.C., and they presented our Crew with souvenir coins that I still carry with me on flights today.” His dedication to making personal connections with each of his Customers makes Salvador a shining example of a Servant’s Heart. Thank you, Salvador, for making all your Southwest flights safe and enjoyable experiences. ... View more

Traveling on a College Student’s Budget: The Campu...

by mkaleta |
Active Member
in Blog
6 Loves
6 Loves
The following blog post was co-written by two of Campus Reach's fall 2015 interns, Shrinka Roy and Allison Kosic. Roy is a fourth year mechanical engineering student at Georgia Tech and currently interns in Structure Engineering for the Tech Ops Department. Kosic is a third year industrial engineering study at Georgia Tech and currently interns in Contract Services for the Tech Ops Department. It’s funny, but even though we go to the same school, we didn't meet each other until this semester on the first day at the Southwest Intern orientation. And even though we barely knew each other, we ended up traveling together that first weekend. Since then, we've become traveling buddies for nearly every trip we've taken! We've been to a ton of cities: Seattle, Vancouver, San Francisco, San Diego, Los Angeles, Denver, Las Vegas, Albuquerque, Austin, Atlanta, St. Louis, and San Juan. We’ve been to nine national parks and have each logged over 200 hours in the sky. As our internship comes to a close, we now consider ourselves travel experts and want to share some essential tips on how to travel on a college student budget: Keep an eye out for  flights, and be open to a bunch of different destinations instead of settling on one! Don’t underestimate the power of Facebook when your overnight accommodations don’t pan out. You’d be surprised by how many friends (or friends of friends) you have in random places! On your way back from a destination, consider a layover somewhere for a few hours—whether just for lunch or dinner, or to visit a landmark! If you stay at a hostel, make friends with fellow travelers like yourself. You can end up making friends all over the world, and that means more couches to sleep on in the future! Clear out the pictures on your phone before traveling, because you WILL run out of memory space and then agonize over which pictures to delete/keep to free up space. To conserve phone battery, put your phone on airplane mode whenever possible.   We sure have had an incredible past three months traveling from coast to coast across the U.S. Thank you, Southwest Airlines, for allowing us to experience the flight of our lives during our internships! ... View more

by mkaleta |
Active Member
in Blog
4 Loves
4 Loves
When Jeff Senour received Southwest’s President’s Award this past spring, it already seemed like he had struck a lucky cord. But after a nearly hour-long conversation with Southwest CEO Gary Kelly at the banquet for award recipients, Jeff received more than just recognition for his charitable work—he was gifted with one of Gary’s guitars. And it wasn’t just any old guitar. The Taylor guitar is painted in Southwest colors, and Gary signed it himself! Gary made the decision to give Jeff one of his personal guitars in order to show his appreciation not only for his outstanding service to Southwest for 22 years, but also for his work for our country. As a Pilot for Southwest, Senour soars high on a daily basis. But it’s his compassion for giving back to those less fortunate that truly have him breaking beyond the sky’s limit. Jeff founded his band, Consider the Source, in 2002 with the goal of motivating America’s youth through music. “I wanted to do something unique and touch young people’s lives in a positive way through our music,” he said. “I was attending my daughter’s orchestra recital when I thought of integrating high school or college students with CTS. “ CTS—whose members also include Dylan Elliott, Jerry Nuzum, and Joe McGinnity—aims for an edgy rock sound juxtaposed among heartfelt lyrics that are designed to inspire passion and motivation within people of all ages to pursue their dreams. The band travels around the country to perform what they call the “Freedom Rock Experience,” where students in high school and college orchestras pair with CTS to create a high-energy multimedia rock show that brings more than 250 students to the stage. The performances are a way to motivate students to follow what they love, while still honoring American heroes such as members of the military, police officers, firefighters, and teachers. Their admirable mission came with much appreciation from fans and organizations across the country. CTS has received numerous awards for their dedication to service and their music has been featured in fundraisers on iTunes and national radio charts—their song, “Can’t Get Off this Train” hit number 42 in 2008. Since receiving his guitar from Gary, Senour has gone on to bring his Servant Heart directly to Southwest flights through his music. “I enjoy the Culture of Southwest” he said. “On each flight I do my best not only to be safe, but to leave our Customers with some fun and inspiration.” Senour has already been spotted on several occasions performing with his custom guitar to passengers before their flights. Jeff, you’ve certainly found the melody to our Hearts!   ... View more

by mkaleta |
Active Member
in Blog
2 Loves
2 Loves
Today we are expecting the technical systems that power our Customer Service to perform normally.  Teams worked throughout the night in advance of our first departures to ensure the smoothest operation of our originating and later flights. Out of the 3,355 daily flights in our schedule on Sunday, the airline operated with 75 percent ontime performance. The technical issues did result in approximately 836 delayed flights Sunday. Employees worked around issues with primary systems and utilized back-up procedures to get our Customers and their checked luggage to their intended destinations. We have some additional work to do to get bags delivered and some delayed or displaced Customers into open seats today. We have teams working as quickly as possible to accomplish that. The flexibility we extended our traveling Customers on Sunday continues throughout Monday and that will allow those with travel plans scheduled for Sunday or Monday to change their plans at Southwest.com.‎ It’s never too early to say thank you and to extend our apologies and we want to share those sentiments both with our hard-working Employees and our loyal and understanding Customers, whom we hope to welcome back for a better experience soon.  We’ll continue to work individually with our affected Customers to make this right.‎ ... View more