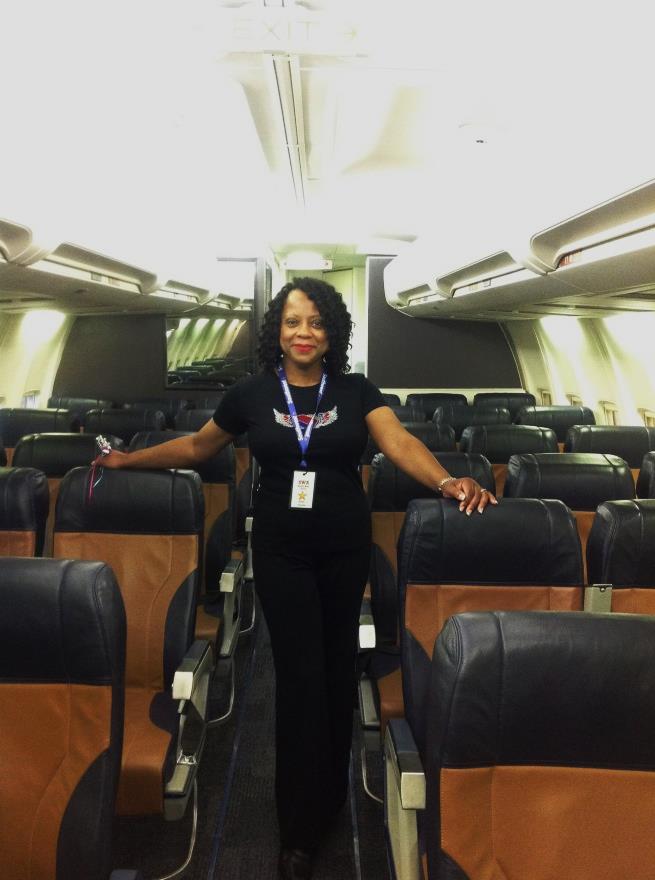 by lclemons |
Not applicable
in Blog
2 Loves
2 Loves
My mind, heart, and spirit are still soaring from my SWA-tastic visit to the Land of LUV—also known as Southwest Airlines Headquarters—for “Wow the Customer Day” during this year’s annual Spirit Week celebration.  As Southwest’s self-proclaimed Number One Fan, I never imagined in my wildest dreams that a special day would be planned by Southwest and dedicated solely to me. As I prepared for my early morning flight from Indianapolis to Dallas (where Southwest’s Headquarters is located), the day began with a celebrity sendoff from my friends, Bobbe Waters and the rest of the lean-but-mighty Indianapolis Ground Ops Team. They gave me a bottle of champagne and a “crown” and “sash” made entirely out of peanut bags and swizzle sticks! They even took pictures and made a special announcement in the gate area that I was their “Southwest Airlines Spirit Star” for the day. After the quick hour-and-40-minute flight landed in Dallas, I was again delighted to receive a rock star welcome from cheering Southwest Employees and Interns greeting the arrival of my flight with gifts and signs to officially kick off my special day. The Southwest Airlines Employee Shuttle was on hand to whisk me away from the airport over to the nearby Headquarters campus.  Once there, a glittering star-lined path led me to a special welcome reception where even more cheering Employees greeted my arrival and Southwest Leaders Ryan Green, Managing Director of Customer Development, and Linda Rutherford, Vice President of Communication and Outreach, were waiting to welcome me. I was overjoyed to learn that the next stop on my itinerary was a meet and greet with none other than Southwest Airlines President Emeritus herself, Colleen Barrett.  I floated on air past a set of double doors marked “Emeritus” where Colleen appeared from her office filled with all the joy, smiles, hugs and kisses one would imagine. A few moments later I went into “joy shock” when, to my surprise, Southwest’s legendary Founder and Chairman Emeritus Herb Kelleher walked through the door. Someone once said, “It’s best to be prepared for an opportunity and not have one than to have an opportunity and not be prepared.”  With that in mind I had come prepared for my meeting with Southwest Royalty and—wand in hand—I asked Sir Herb if he would do me the great honor of “knighting” me as an honorary Southwest Employee.  He graciously obliged in a moment that will live with me forever as one of my most prized memories. I was still processing the whole experience of meeting Herb and Colleen when it was time to walk over to the hangar where Southwest aircraft are maintained for an up-close and personal look at what it takes to keep their fleet of beautiful blue Boeing 737s flying. Senior Tech Ops Instructor Larry Boone did an outstanding job explaining how the experienced men and women of Southwest’s massive Technical Operations Team perform countless checks and maintenance tasks around the clock on each and every one of the nearly 700 aircraft that make up the fleet. We departed the hangar for our next stop, Flight Operations, where Marisa Crist showed us what goes on behind the scenes “above the wing.” Even though we had just met, Marisa felt like an old friend as she showed us around the amazingly high-tech flight simulators that Southwest Pilots use to undergo recurrent training. Next, Inflight Instructor Darin Sanders greeted us with a huge smile and showed us around the cabin simulator where Southwest Flight Attendants are trained to provide world-class Customer Service while always maintaining focus on Passenger Safety. Haley Mulvey then took me on a tour of Southwest’s state-of-the-art “Network Operations Center,” or NOC as it’s often called, for a peek at the airline’s nerve center where every single aircraft and flight is controlled. It was a quiet and cavernous space with an otherworldly feel, bathed in dim blue light and the glow of hundreds of computer and video monitors. Later that afternoon I had the opportunity to sit down with Vice President of Internal Audit, Katherine Findlay, who provides executive-level engagement for Southwest in the Indianapolis community. I shared a delightful conversation about my hometown with Katherine and her executive assistant, Melinda Vail Goodnight, which left us all inspired and excited by our new ideas for Southwest and the Circle City. A very special and unexpected bonus came at the end of my visit when I had the opportunity to spend time with the larger-than-life Chairman, President, and CEO of Southwest Airlines, Gary Kelly. Gary greeted us warmly and asked us into his office to sit down for a casual conversation. I told him some of my favorite Southwest stories, and our time together was so enjoyable that he even invited me back to Southwest Headquarters again next year to judge the Company’s annual Halloween contest! (I already have my costume picked out and ready.) I was so impressed and appreciative that all of these Fun-LUVing Servant Warriors took time to meet me and share their unique contributions, passion, and enthusiasm for Southwest.  Colleen even sent me a follow up gift—a “Golden Rule Recipe” plaque—that now hangs in my kitchen to remind me of my special day whenever I see it. I was taught a long time ago to give those who have touched our lives their “flowers,” or praise, while they are alive (or in the case of Southwest, to give them their peanuts and pretzels). In addition to all the folks I’ve already mentioned, I would also like to thank these wonderful Southwest Servant Warriors who have been instrumental in my introduction and journey with Southwest Airlines: Jackie Thompson, Karen Price-Ward, Laura Nieto, Dan Hinson, Helen Cheatham, and Michael Burkhardt.   ... View more