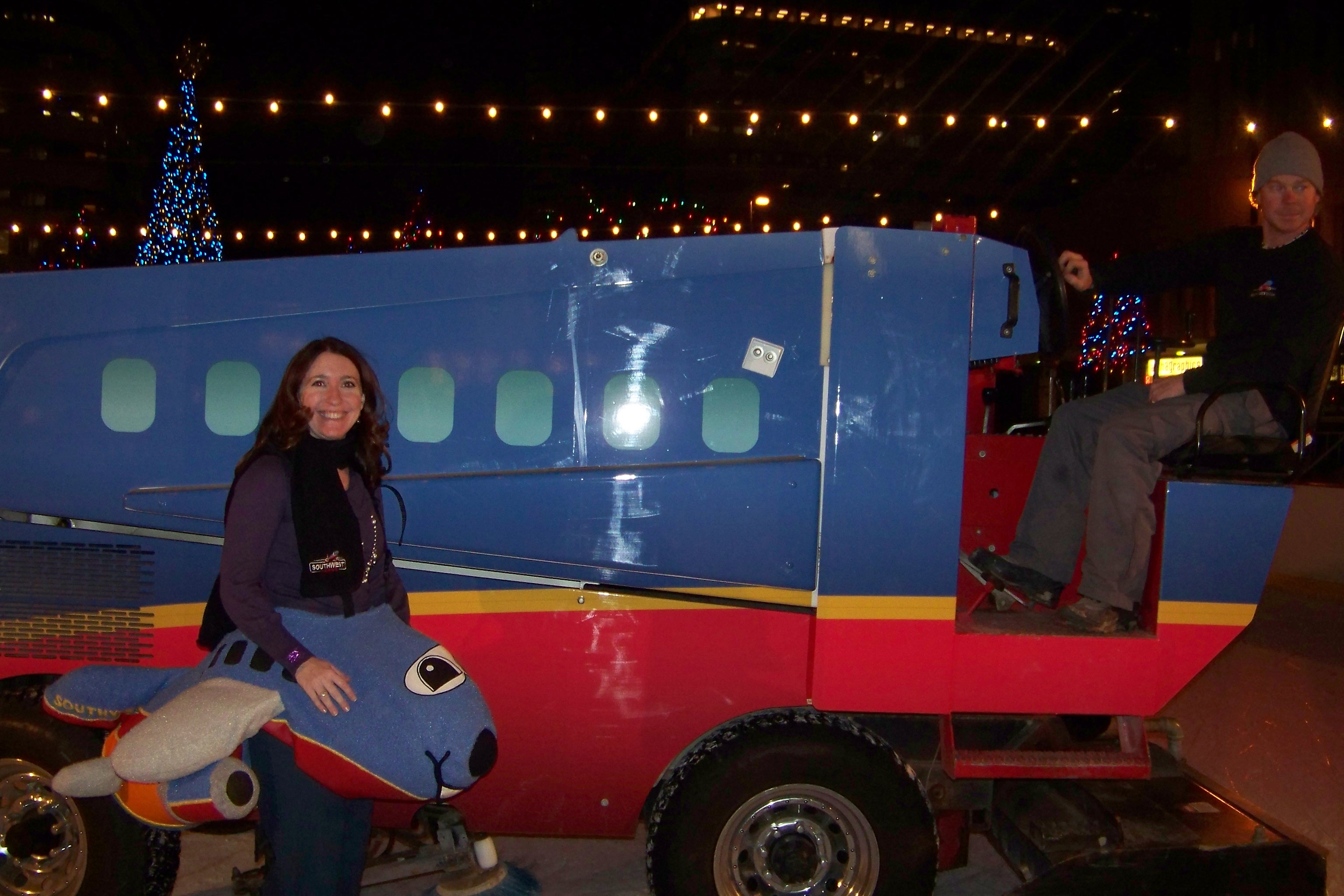 by amckinney |
Not applicable
in Blog
458 Loves
458 Loves
Schlafly Beer set a record at this year’s Stout and Oyster Festival, held in St. Louis March 9-10: 15,000 oysters shucked within the first night!  As a sponsor of the two-day festival, Southwest Airlines Cargo shares the passion for speed and efficiency.  More than 30,000 oysters were shipped in for the event, and thanks to the Cargo, Ramp, and Operations Employees who provide efficient same-day service, they arrived fresh and ready to be shucked.  In coordination with the primary suppliers for the festival, Penn Cove Shellfish Co. and American Mussel Harvesters, Schlafly works with the farmers in their supply chains to feature seven different oyster varieties at the festival.  Through our sponsorship, Southwest Airlines also flies in oyster shuckers from across the U.S. to work the event.  After indulging in oysters, festival-goers enjoyed watching the Speed Shucking contest featuring the 2008 World Champions Chopper Young and Trace Hundertmark.  Interested in who displays the best speed and accuracy?  Check it out the video to see who came out on top! Similar to Southwest Airlines, Schlafly Beer empowers their Employees to play an active role in the company’s success while making sure they have FUN doing so. During the two-day festival, Schlafly WOWed more than 5,000 Schlafly Tap Room visitors with their deliciously fresh brewed beers, including: Pale Ale, Dry Hopped APA, Hefeweizen, Kolsch, Oatmeal Stout, and Pilsner, to name a few.  Schlafly brewers can dream up their own unique recipes that are LUVed by the Tap Room visitors.  The Schlafly crew is engaged in a FUN Culture and at the festival’s VIP event on March 8, the crew had a great time with the Cargo Customers and Employees we hosted at the event who enjoyed oysters, beer tasting, and an educational tour of the Tap Room. The next time you are traveling to STL, take the time to visit the Schlafly Tap Room or Schlafly Bottleworks.  Check out a few of their upcoming events, including “The Repeal of Prohibition Beer Festival” on April 14, where Schlafly serves their own list of beers brewed in St. Louis and brings in beers brewed in another state, not available in the St. Louis market.  This year, brewers from Texas will join in the festivities.  In October, Schlafly will benefit from Southwest’s same-day Cargo service again, when we fly in freshly picked hops from Portland (PDX) to STL for their “Fresh Hop Beer Festival.”  If you are interested in tasting Schlafly beers, the beers are available in Missouri, Indiana, Kentucky, Tennessee, Kansas, Iowa, the DC Metro Area, and Illinois (excluding Chicago).  Visit www.schlafly.com to learn about their beer selection, and be sure to discuss your favorite tastes and styles or the events you attend by connecting with Schlafly on Twitter or Facebook.  ... View more

by Susan_Floor |
Not applicable
in Blog
10 Loves
10 Loves
I was a first time flyer at 46 since I was TOTALLY FREAKED OUT at the mere thought of flying! But, my boys were grown now and I had gotten a large bonus at work, so my friend and I decided to fly to Hawaii (of all places) booked it on American Airlines. It went pretty well after my entire body shaking for 4 solid hours. ( the flight was 9 hrs.) My friend just fell asleep! I thought how can ANYONE sleep when we could crash at any moment? Yeah, I was "Kate" in the movie French Kiss and yes, I did sing "I Love Paris in the Springtime" (and still do) some other nonsensical song to keep my mind off of flying. THEN I took my first Southwest flight to Florida! Everyone was so nice and a couple of guys up by the cockpit teased me when I went searching for the loo. I think they knew I was nervous since I was still a bit shaky. I guess my continuous hand wringing and quivering lower lip gave me away. They said "You mean the bathroom?" I nodded yes, then the other guy looked at his friend while rubbing his chin, then said to me "We don't have one!" My mouth dropped open with a look of total disbelief said, softly "Are you f 'n kidding me?" They both looked at each other shaking their heads, NO. My face was red as a beet and I hadn't seen any sun yet! They both suddenly began to laugh uncontrollably and said "Yeah." "We were just kidding." I said "Man, you guys are bad!" We were all laughing then and they both said "We know!" There are many other examples of the fun-loving staff that keeps me calm and NOT focused on the tons of steel staying in the air without spiraling, crashing to earth immediately upon take-off. It's still just so surreal to me! I like the pilot's comments too. I love to laugh and what they say really IS funny! And so, my love affair with Southwest began and continues 13 years later. I have taken many flights since the one to Hawaii and Orlando, but NEVER on any other airline. I just LOVE Southwest ! ... View more

by amckinney |
Not applicable
in Blog
478 Loves
478 Loves
The gorgeous weather made a perfect night for the Cargo Sales and Marketing Team to host Denver Customers at the Southwest Porch at Skyline Park.  With the festive decorations, trees adorned with holiday lights, and holiday music playing, our Cargo Customers and their families were able to relax, watch the skaters, and enjoy a hot cup of cocoa, coffee, or beverage of their choice while listening to holiday music. Friends and Family of Cargo Customer Ceva Logisticis, with Cargo Senior Sales Manager John Barnes and Cargo Sales Manager Chris Harman   Our Sales Team invited a handful of our Cargo Customers to check out the Southwest Porch at Skyline Park.  Guests enjoyed hand-tossed pizzas made to perfection in a wood fire grill, spiced apple cider, hot cocoa, and delicious cinnamon rolls!  Guests received a few FUN gifts including: warm scarf, neon blue pint glass, slap bracelet, chapstick, mint box, etc.  Plus, guests were able to skate for free at the Southwest Rink at Skyline Park. Daughter of Cap Logistics Customer, James Hedemark   Rachel, from Precision Air Cargo, said “prior to last night I can’t say I was in the Christmas spirit (my favorite time of the year) but as I was driving home reflecting on the evening, I realized that my Christmas light was officially lit. Southwest knows how to party. The Southwest Team is an awesome collection of wonderful individuals who shine bright and I felt blessed in the chance to meet and spend time with you all.” (L-R) Precision Air Cargo Employee Karla Kalcevic, Cargo Manager of Marketing & Communication Amy McKinney, Denver Ramp Sup Natalie Hurt, and Precision Air Cargo Employee Rachel Thomas.   I feel so blessed this holiday season to work for such an amazing Company and have the opportunity to invite Customers to enjoy our Culture and have FUN celebrating the season!  A big thanks to the Cargo Sales Team for having such an awesome relationship with our DEN Customers!  And, on behalf of Southwest Airlines Cargo, we wish all of you a wonderful holiday season!  ... View more

Re: Southwest Airlines Cargo Takes Quality to the ...