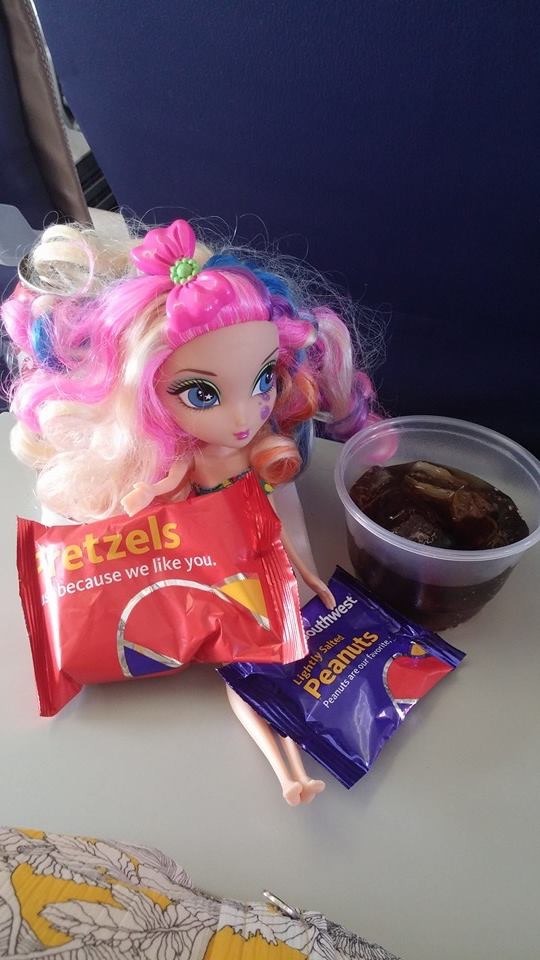 Every Seat Has a Story: A Doll’s Journey

by pluke |
Not applicable
in Blog
2 Loves
2 Loves
As a grandmother who only gets to see her granddaughters twice a year, I always cherish the time we get to spend together. Recently, I flew on Southwest from Dayton, Ohio, to Orlando, Florida, to see my grandchildren, Eva and Ariel. Surprisingly, my son-in-law, Chris, a Southwest Pilot, was one of the Pilots who flew me to Florida. Once my granddaughters and I were reunited, we spent a whole week shopping, watching movies, and playing with dolls. Before I knew it, I had to return home. After sharing one more snuggle and bedtime story, the tears started to flow from the children. “Oh Nonna, we don’t want you to go,” Eva and Ariel said. Little Eva even gave me her doll and said, “If you take her with you, it will be like having me with you.” I gave them one last hug and agreed to take the doll with me. It made sense to rename the doll, Arieva, after my precious grandgirls. To avoid more tears, I left before the girls woke up the next morning. I decided to use Arieva to send the girls pictures of our journey back home. We started at the Southwest kiosk, stopped for a quick “pic with Mick” and headed to our gate. I received unusual looks from onlookers, which I was happy to endure, since, as a grandmother, I would do anything for my grandkids. I was determined to create a special memory for my granddaughters with their doll. Arieva and I went through security and flew to Baltimore with the happiest Flight Attendants on earth. I wondered how anyone could be that happy so early in the morning. I had never flown through Baltimore before and was a little worried. The Southwest Crew happily guided me to my gate for the second leg of my trip home. After I found my seat onboard, our Flight Attendant inquired about the doll sitting with me. I explained why I had her and asked if she would mind if I took a picture of her holding Arieva for our journey. The Flight Attendant was a “peach” for indulging this grandma’s whim. Arieva and I shared our “selfies” with the Flight Attendant, and she brought extra peanuts and a drink for the doll, which allowed me another wonderful photo opportunity. Our friendly Flight Attendant shared stories and made our trip home quite enjoyable. We received the same great service that we are accustomed to when flying Southwest. This could have been a “read a magazine, have a drink and not engage” kind of flight. Instead, she went “above and beyond” demonstrating that she loves her job through her positive attitude and the care shown to everyone onboard. Upon landing, we said our goodbyes and wished each other well. Ariel and Eva were thrilled to see the pictures of their doll’s journey, although there was a moment when Eva missed the doll so much that she was in tears. Arieva is now safely back home in Orlando recovering from her exciting travels. Her adventure was the “thrill of a lifetime” and she has a calendar to prove it! ... View more