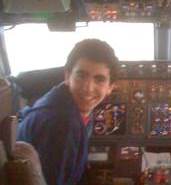 Customer Stories: LUV from North of the Border

by eniles |
Not applicable
in Blog
2 Loves
2 Loves
While flying may be a difficult or negative experience for some, I will always recall my trips with Southwest as overwhelmingly positive. I remember when I flew to Seattle a few years ago, I received such excellent Customer Service that I felt compelled to write a letter to Southwest on the return flight to Albany. I found it necessary to thank Southwest for making me feel valued, and to explain why I loved them so much. I hadn’t thought much about that letter since then, but a recent encounter made me re-visit what I wrote back in 2013. I was in Toronto not too long ago to attend a hockey game with a friend. At the end of dinner before the game, the waitress brought the bill and I pulled out my Southwest Premier Credit Card. My friend and the waitress did a double take and my friend asked me, “What is Southwest Airlines?” The waitress said she had a friend who drove to Buffalo and flew this “Southwest Airlines” because it was inexpensive and ontime. She said even with gas to get to Buffalo, they saved tons of money.  Both my friend and the waitress thought they were a bit crazy to drive, but I told them it was the smartest idea.  I told them about the open seating, about how bags fly free and that they didn’t charge a fee to change or cancel a reservation. This blew their minds.  They were in agreement to try Southwest for themselves someday before I told them that when my father flies, my mother flies for free.  At first, my friend thought I was joking and started laughing sarcastically. I sat there completely serious and showed him the website explaining the Companion Pass. It seemed like such a revolutionary concept to him that the Earth might have stopped rotating. As my friend processed all I had told him, he was left with one last comment, “Enough with expensive tickets and excessive fees, when are they going to start flying to Toronto?” After explaining the refreshing experience of flying Southwest, I suddenly began to remember why I loved it so much to begin with. Looking back at my old letter, I noticed that I had made a request for their involvement in the TSA Precheck program, and I had also expressed excitement in the fact that they would be flying internationally soon. Three years later, all Southwest flights and destinations are Precheck eligible, and they fly to several international cities. Southwest offers a pleasant experience, low prices, and has benefits that are unmatched by other airlines. What makes Southwest  the best are the People who give it their all each day for each Customer to experience, “The Southwest Experience." While I think of a conclusion to write, I am so tempted to use the same one from the 2013 letter with the exception of my wishes as they have come true. While, I can’t think of any now, I am encouraged to see how the airline grows in the months and years to come. To everyone at Southwest, thank you for redefining the flying experience and thank you for doing it with lots of “LUV.” Sincerely, Eric Niles ... View more