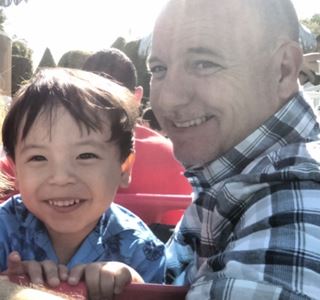 by brwilliams |
Not applicable
in Blog
6 Loves
6 Loves
Working for a rapidly growing clean energy company that is in 18 states is beyond rewarding. However, with that hyper growth, I’m tasked with a substantial amount of travel. Over the last year I have flown roughly 50 flights, a travel schedule that takes me away from my family for more than a third of the year. My wife Sandra and I have a son, Austin, who will be three this July, and one of the most difficult aspects of my position is that I’m constantly away from him. For his first two years, I would travel with much less guilt, as I knew that Austin at that age had a limited understanding of time. As he began approaching his third year, this has begun to change. Austin knows that once daddy starting packing a suitcase, that he would not be seeing me for a few days. The goodbyes have started to be more emotional. Austin doesn’t want me to leave, and I’m continually torn between wanting to be home with my family and the importance of supporting my team as we expand. As I travel, Austin will often look up at the Southwest planes that cross over our house. He will point and ask his mom, “Daddy working on the plane?” or “Is daddy coming home?” If one is to ask Austin what his father does for work, his answer is most often, “Daddy works on the plane”, as he points to the sky. Knowing how tough travel can be on families as both the children cope with a parent being away and with the parent dealing with guilt that accompanies one as they miss out on their family’s life, we actually found comfort in the inflight peanuts. For over a year, I have had a routine of greeting Austin upon my return home with a bag or two of Southwest peanuts. When he sees his daddy come through the door, he knows I’m bringing him his favorite treat. As soon as Austin sees the bag of peanuts, his face lights up and for a moment it is as if I was never gone. Immediately my guilt from traveling somewhat dissipates. On a recent flight from Ontario, California, our Flight Attendant was passing out the peanuts and pretzels. He offered me both and I asked him for, “Peanuts only please." I quickly explained that I travel all the time and that I bring our little guy the peanuts to ease the separation pain. Shortly before we touched down, the Flight Attendant came by and handed me a whole package of peanut bags. I was stunned and couldn’t wait to bring them home to Austin. I walked through the door that night and as Austin came running up to hug me, I reached into my backpack and handed him the bag of peanuts. His face said it all. Pure joy is the only way to describe the wide grin sprawled across his face. He took hold of the bag and held it as if it were a pillow. Such a small act of kindness by a caring flight attendant Southwest, made for reunion that will forever be remembered by both a father and his son. ... View more