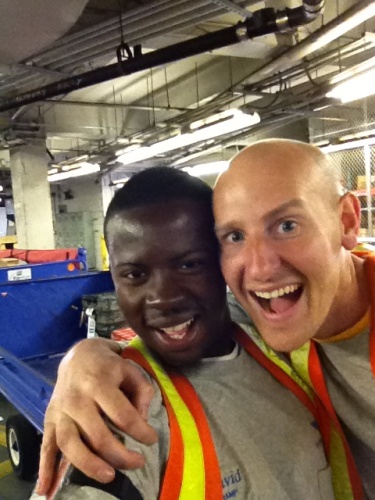 The Fun-LUVing People who Became Family

by dstuper |
Not applicable
in Blog
377 Loves
377 Loves
I had my interview for Southwest Airlines the day after I moved to New Jersey from Syracuse, NY.  It seemed as if everything was working against me to get this job.  My phone interview was almost sabotaged by my cheek, after realizing that I was talking for almost two minutes while my phone was on mute.  Shelly, the one who interviewed me, thought it was funny and decided to bring me in for a face-to-face interview.  There was an ice storm in New Jersey the morning of my interview, and I had never driven to Newark before, so I left over two hours early.  I even set two different navigation systems so I would be sure to find my way the Marriott—where the interview was.  Both GPS' were giving different routes, and it seemed as if they were fighting with each other, so I eventually shut one off.  Fortunately, I made it to the interview early, and Shelly was the one who actually interviewed me.  After waiting almost a month to clear background, I finally got the call that I was officially hired and would be on the opening Team for EWR.  I didn’t know anyone in New Jersey, and I certainly had no idea that the group I would be flying to Chicago with (for badging) would end up being Family to me.  Having FUN and making people laugh are my main focuses at work (after Safety and getting ontime pushes, of course). Last year for Halloween and Thanksgiving, I dressed up as a turkey, and in December I dressed up as a Christmas tree.  Both times I got great reactions from my Co-Hearts and Passengers.  I would spend time on the jetbridge making turkey calls and taking pictures with Customers and Flight Crews.  I look forward to doing the same during this year's holiday season—only with different costumes, so stay tuned!  The day I wore the Christmas tree costume was actually the first day for a few of our Ramp Agents, so it was FUN introducing myself to new Employees with presents attached to my legs.  I LUV the People I work with, too. The Employees at EWR are full of personality and make it easy to have FUN. "McNugget," "Crabby," and "Johnny Whispers" (AKA "Bada Bing") are just some of the characters I work with here in Newark.   Each one of these guys could easily have their own reality show.  John Fraschilla ("Johnny Whispers") was born in Brooklyn, NY, and is the epitome of a New Yorker.  If the Empire State Building could talk, it would have John's accent.  He sounds like Robert DeNiro telling a secret.  Almost every Ramper does an impression of John, and it never gets old.  Southwest has provided me with a home away from home and a second family that I would do anything for—except work Sundays during football season! (Go Buffalo!)  Having FUN and making people laugh is important to me, because I hate to see anyone in a bad mood.  If I ever do come to work in a bad mood, then I know it won't be long before someone makes me laugh.  It's all about FUN and Teamwork, and you can't spell tEamWoRk without EWR!  I really am lucky to have gotten this job and I wouldn't trade it for anything.   ... View more