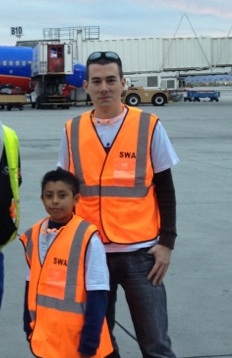 by mdeal |
Not applicable
in Blog
274 Loves
274 Loves
Years ago in Philadelphia, I had a friend whose wife was volunteering with the Big Brother Big Sister Organization, and told me about the program.  I knew it was something I wanted to get involved with, and I knew I would eventually jump onboard, but for one reason or another, I kept putting it off. It wasn’t until I moved to Las Vegas that I finally committed, and I have never looked back.  I am Big Brother to a boy named Jesus, and our friendship is mutually rewarding.  At our recent tour of Southwest’s operations in Las Vegas, I think a future pilot was born. To say I’m a Southwest fanatic would be an understatement.  My family and I almost always fly Southwest.  We travel to Philadelphia and San Francisco once or twice per quarter, equipped with our Southwest Rapid Rewards credit cards.  I reached out on a whim, through Twitter.  Social media proved invaluable in making Jesus’ tour a reality.  Thanks to the eager Southwest Employees behind the @SouthwestAir Twitter handle, in Communications, and in Las Vegas, this all came true. On the ground, Tawyna J. in Las Vegas went above and beyond my expectations.  She went out of her way to make sure we saw everything we wanted.  Lucky for us, we hit a lull at the airport, which allowed us to see absolutely everything there was to see. We started in ticketing and then made our way to baggage.  From baggage, we went to the TSA area, through security, and then boarded a plane and chatted with a pilot.  Jesus was able to pretend he was a passenger (which put a big smile on his face). Afterward, we returned to ticketing and were given some Southwest peanuts and some other goodies.  But without a doubt—sitting in the flight deck and asking the Captain questions was Jesus’ favorite part.  He was in heaven and still won’t stop talking about it. We met so many people on the ground in LAS that I lost track of names, but Jesus and I can’t thank them enough.  To those who are looking to get involved with the Big Brother Big Sister Organization, I would recommend anyone with just four free hours per month to get involved.  The organization is in most major cities, and there are plenty of kids waiting to be matched with “Bigs.” ... View more