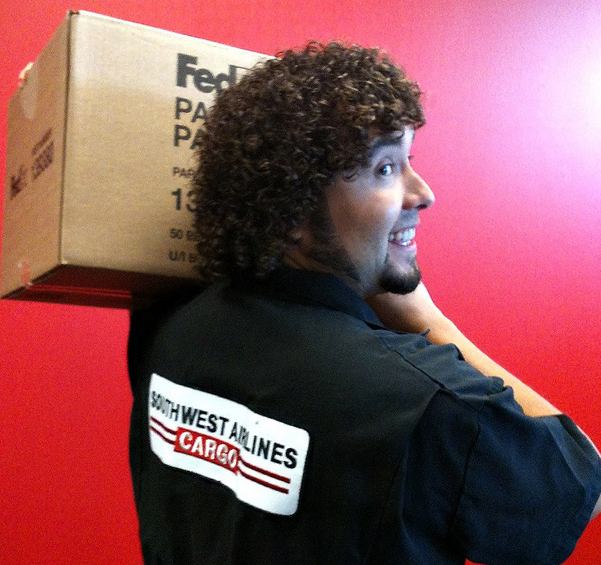 View all badges
Topics tduran has Participated In

Behind the Scenes: Photographing SWA’s Award-Winni...

by tduran |
Explorer C
in Blog
83 Loves
83 Loves
Pride.  If I only had one word to describe what it was like to art direct photo shoots for the Southwest Airlines’ 2012 One Report on our triple bottom line of Performance, People, and Planet, that would be it.  Not only do I have pride for the Company I work for, but it makes me proud to see our energetic and passionate Employees who are participating for that same reason.  Our fourth annual award-winning integrated report is now available on southwestonereport.com, and one way we spotlight how we’re working to become the world’s Most Loved, Most Flown, and Most Profitable Airline is by showing you our greatest asset—our People. This year we flew out to Denver to photograph our Employees on a brand new red-bellied Boeing 737-800 to showcase that we’re more than an airline—we have a purpose of connecting people to what’s important in their lives, and this cover photo captures just that.  It took three late-night hours from setup to cleanup, but after countless camera snaps of smiles, we got this perfect shot.  Of course, time flew by as we got to know one another by sharing our favorite Southwest experiences.  Denver-based Flight Attendant Sandra, who’s holding the Top 10 World’s Most Admired Company sign in the front, is one of the Employees who left a lasting impression with me.  Her Warrior Spirit and Fun-LUVing attitude were on display—you can see so much enthusiasm in her smile. While studying composition in college, I never realized how valuable photographing letterforms in nature would be—check out the example below. This training to develop an eye to see “the hidden” as well as attention to detail lead me to eventually make great compositions for one of the world’s most admired companies—Southwest Airlines.  Below are a few other photos we took in Denver, many of which you’ll see when you check out the 2012 Southwest Airlines One Report, and I hope you can feel the energy and pride I saw as the shutter opened and closed on every snap. Here’s what some of our Employees had to say about being involved as models in the One Report photo shoot: “It was such an honor to be selected to participate in the One Report photo shoot.  I enjoyed the experience of meeting a diverse group of People from across the Company – and after many takes and re-takes, we were laughing like we’d known each other forever!  Great job, Team – who knew getting the right shot is such hard work!” – Manager of Executive Office & Culture Services Roz Nelson “I am honored to be featured in the 2012 Southwest Airlines One Report holding the "Top 10 World's Most Admired Company's" sign as it represents how proud I am to have chosen a career as a Flight Attendant for the best Airline in the World. It is always great to be on top! – DEN Flight Attendant Sandra Hall “It was exactly what I was told it would be—fun.  I enjoyed interacting with co-workers and people I ‘ve never met. It was a new experience for me, and I would do it again!” – Facilities Fulfillment Services Specialist Manny Jaime “While participating in the photo shoot, I was able to express a sense of pride for my Fun-LUVing Company! What's more, I was able to meet great people, who also endured some long hours, but we made it very enjoyable with mindless banters.” – DEN Ramp Agent Starr Luu “It was such an honor and privilege for my son and I to be part of the 2013 One Report. Seeing him passionate for what I LUV, excited about being on an -800, and meeting my co-workers was a once in a lifetime experience for him.  To think about all of our accomplishments, milestones, and all of the hard work that goes into making this Company what it is today, makes me feel proud and blessed to work at Southwest!” – People Projects Specialist Berri Gentry “I had a blast shooting the One Report cover. The shoot was in Denver, it went late into the night, and it is an experience I will not soon forget. I made several new connections with people from all over Headquarters, as well as Denver Ramp Agents, Customer Service Agents, and Flight Attendants. I not only have new friends that wave at me in the halls of HDQ, but now I have faces I recognize in one of my favorite airports—Denver.  The One Report reflects Southwest’s commitment to Performance, People, and Planet, and it is an honor to be featured with these great people, on one of our new -800s, on the cover this year.” – Investor Relations Analyst Melissa Curl     More than four decades after our founding, we’re proud to be the domestic airline industry leader in Customer satisfaction, the nation’s largest airline in terms of domestic Passengers carried, and the record-holder for profitability with an unprecedented string of 40 consecutive years.  Be sure to check out our latest One Report, where you can find interesting facts such as diverting more than 2,900 tons of material from landfills and into recycling facilities with our co-mingled recycling program. ... View more