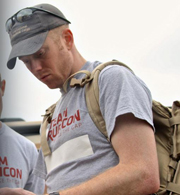 by pmeijer |
Not applicable
in Blog
101 Loves
101 Loves
On the television, I watched a live feed of first responders in Moore, Oklahoma, desperately search for children trapped in the ruins of Plaza Towers Elementary School. As night set in, there wasn't a lot of hope to go around. Several children and adults were confirmed dead, with many others still missing. I was in New York, several hundred miles away, but I knew the men and women of Team Rubicon, made up of military Veterans who are disaster-trained, would respond to this tragedy because of duty and goodwill. Less than a week after the disaster, my fellow Veterans and I were spending Memorial Day serving the Moore community to honor the memory of our own friends and loved ones who died serving their country.  Thanks to the generosity of Southwest Airlines, we were able to fly from New York’s La Guardia airport to Oklahoma City to begin helping the community recover. One of the days we were clearing the remnants of a retired soldier's home. Among the debris we were able to recover photo albums, his old military discharge paperwork, and a few personal mementos the twister didn't scatter. There was nothing much to save other than these bits and pieces, but our main job was to get the broken timbers and drywall and everything else to the curb so he could rebuild. We did the same for his neighbor, a Moore firefighter who picked up his daughter from Plaza Towers early only to head back to the school when the skies cleared to try to save her classmates. We want to do everything we can to help them return to normal as quickly as possible; though we know that not one of us volunteers can fill the void left in the hearts of the friends and relatives of the tornado's victims, but we can help the survivors regain hope. Southwest's donation of tickets allowed us to get to Oklahoma to honor the dozens killed in the tornadoes and the thousands of our fellow Soldiers, Sailors, Airmen, and Marines who died in service to our nation. Team Rubicon couldn't make this impact without Southwest's help and excellence in doing what they do—connecting people to what’s important in their lives—and what’s important to us right now is helping the Oklahoma community. ... View more