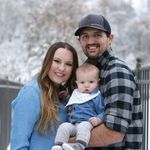 A Lucky Friday the 13th!

by Davycrockettmhs |
New Arrival
in Blog
1 Love
1 Love
My wife Lydia worked in Bullhead City, Arizona, each month for two days from Wednesday to Thursday. Her whole office would fly to Vegas and then drive a couple hours to Bullhead City. At the time, I was working for a power company in Pocatello, Idaho, and I had an interview for a bigger, better job in Texas.   We first saw each other on Wednesday morning at the airport Wendy's for breakfast. We didn't say much to each other, but we definitely noticed each other. I sat down in the mix with all of the people from her office and we kept checking each other out. When we got on the plane I smiled at her as I walked by. She gave me this look like "why are you smiling at me?" That was the last time we saw each other because my stop in Vegas was just a layover. We went about our couple days.   Then I flew back through the Vegas airport on my way back home. I was standing at the gate when I saw her walk up. I smiled and waved to her and this time she smiled back. We started to board the plane quickly after, and this time I boarded before her. Since Southwest is open seating, I walked all the way to the back of the plane and sat on the left with two open seats right next to me—one was specifically meant for her of course!   She had told one of her co-workers that she would sit next to her on the flight and go over buisness stuff. So when they boarded they sat on the complete opposite side of me. Before I could get up and sit by her, two of her co-workers sat next to me. We talked the entire flight home. We had a late flight that night and after midnight it was going to be my birthday—June 13. So of course I told her co-wrokers about it. As soon as it hit midnight they started to sing Happy Birthday to me right in the middle of baggage claim. It was a little embarrasing, but it pretty cool too.   All the way up to this point we still hadn't even talked to each other.  From the baggage claim, they walked out to catch their shuttle to the car.  Her female co-workers kept telling her I was SO nice and that she needed to get my number before leaving. She first thought no way am I going back in there ... but had this overwhelming feeling to go back. When she finally came back in, I was standing there waiting. We finally started talking and she asked me for my number.   We started texting and went on our fist date two days later—we were engaged three months after that. I got my dream job and moved to Texas and we married three months after that. We have now been married two and half years and have a little boy named Samson. We live in North Dallas and we're living the dream!!   This has been an amazing whirlwind and we are so grateful for the unforgettable blessings we've had. Love at first sight exists and God will give you what you need in his timing if you have faith. Thank you everyone for your support ... we love y'all! ... View more
Categories: