Hurrah!  That is the collective cheer from all 45,000+ Southwest Airlines Employees, as this month we are finally free from the shackles of the Wright Amendment.  The passage of this law in 1979 made our home airport of Dallas Love Field the first and only airport in the United States to be restricted to a small service area—flights out of the airport would be limited to destinations in Texas and its neighboring states (later expanded to include Mississippi, Alabama, Kansas, and Missouri).  Ten years ago, we set out to repeal this restriction, leading a successful effort to overturn the Wright Amendment, which will officially expire on October 13, 2014, at 12:01 a.m.  But who’s counting? This is big news for Southwest and anyone who travels to/from Dallas.  And, we’re not wasting any time exploring our newfound freedom.  Beginning October 13, we will offer new nonstop service to seven cities from Dallas Love Field (Baltimore/Washington; Denver; Las Vegas; Orlando; Chicago Midway; Los Angeles; Reagan National).  We’ll quickly add another eight nonstop destinations on November 2—from New York and California, and several points in between.  And, that’s just the beginning! F Fittingly, our brand new Dallas flights will be provided from a new, revitalized airport facility at Love Field with over 20 new concessions and a brand new infrastructure that will rival the nicest airports in the world.  As we planned for the sunset of the Wright Amendment, we set out to breathe new life into our hometown airport with the Love Field Modernization Program (LFMP).  The artwork in the airport is modern but keeps a splash of the history, for which, Love Field is known.  The New Love Field is a showpiece for the city of Dallas, and its convenient, close-to-downtown location provides even more benefits for our Customers. The Wright Amendment repeal allows us finally to carry people where they want to go from our hometown airport, giving Customers access to our vast network and making Dallas more accessible for the rest of the country.  The city now joins eight other major metro areas in the United States that have more than one airport providing longhaul domestic service.  This means more flights, more destinations, more choices, and lower fares to/from North Texas. So, please join us as we bid farewell to the Wright Amendment!  I have a new appreciation for the term, “It took an act of Congress.”  But, it did; and we did it!  And, we’re now free to move about the country from our home, Dallas Love Field.  We hope you will join us.  What a feeling! 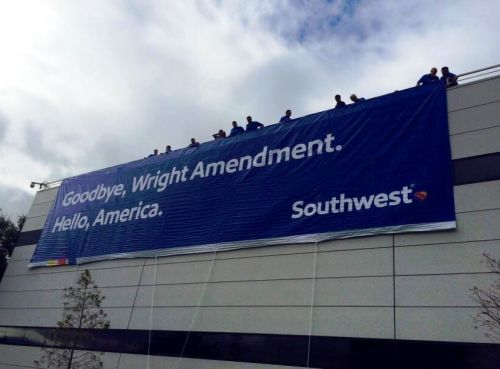