It’s Game Day in Texas and we’re ready to ice down the coolers, start the grills, and put our Horns UP! As the proud Official Airline Sponsor of Texas Athletics, we’re showing our LUV for the Longhorns and giving you the chance to tweet your way to 2 round trip tickets from Southwest Airlines. On Saturday, September 1st, look out for a tweet from @SouthwestAir Twitter account. Respond to @SouthwestAir using your answer and the hash tag #LonghornLUV to be entered! Ready for it?

Hint: This game day chant can be heard throughout Austin before the Texas Longhorns kickoff against the Wyoming Cowboys at 7PM CST. 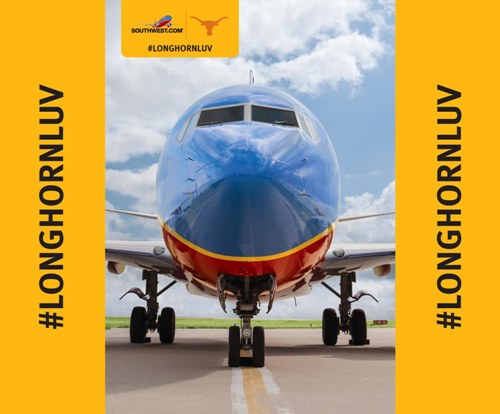 1. To Enter: No purchase or obligation necessary.  Sweepstakes runs September 1, 2012 from 8:00 a.m. CST – September 1, 2012 at 8:00 p.m CST. To enter without purchase or obligation, you must respond to the question posted by Southwest Airlines and tweet your response to @SouthwestAir on Twitter during the promotion timeframe, using the #LonghornLUV hashtag. All entries submitted will not be acknowledged or returned. By entering, entrant grants Sponsor an irrevocable, perpetual, royalty-free, freely transferable license to use their comment for all purposes, in any and all media, whether now known or hereafter devised. Entries may not violate any third party rights nor use any third-party intellectual property.  Entrants acknowledge and agree that their entry does not violate any rights of privacy or publicity and that any necessary written permissions of those referenced or appearing in their post.  Entries must not disparage; contain material that is inappropriate, indecent, or vulgar; or promote bigotry, violence, racism, hatred or discrimination based on race, gender, religion, and/or sexual orientation.  Use of any device to automate entry is prohibited.  Proof of submission of an entry shall not be deemed proof of receipt by Southwest.  Southwest Airlines computer is the official time keeping device for the Sweepstakes.  Sponsor is under no obligation to post any entry.  By submitting your response, you are agreeing that you have read and agree to the Official Rules.

Comment Entry: Participants may enter by submitting a response to the proposed question prompted by Southwest Airlines. Responses must be tweeted to the Southwest Airlines twitter account (@SouthwestAir) and must include the hashtag #LonghornLUV.

Noncompliance with any entry procedure will result in disqualification. Sponsor is not responsible for any computer, online, telephone, or technical malfunctions or delays that may occur, or for telecommunications, network, electronic, technical, or computer failures of any kind, including any damage to a user's computer equipment, or for the incorrect or inaccurate capture of any entry information, or for failure of any e-mail or entry to be received by Sponsor for any reason. Incomplete, garbled, or unintelligible entries will be disqualified.

2. Drawing: On or about September 2, 2012 after the close of the entry period, a random drawing from all eligible entries received will be conducted; decisions are final on matters relating to this sweepstakes. Prizes are guaranteed to be awarded. Odds of winning will depend on the total number of eligible entries received. Potential Winners will be notified via phone and/or e-mail address. Entrants need not be present to win.  All prizes are guaranteed to be awarded.

The winning comment may be featured on the Southwest Airlines Facebook Fan page and the Nuts About Southwest blog.

Approximate total prize value of $800.  Tickets are subject to Southwest Airlines terms and conditions; certain restrictions may apply. No blackout dates. Airline tickets awarded will be open origination and open destination and will expire one year from date of issue. Expiration dates will not be extended, and tickets will not be refundable or redeemable for cash or credit at any time, nor will tickets be replaced if lost or stolen. Tickets may not be sold to a third party. Tickets valid on Southwest-operated, published, scheduled service only from the airport nearest the winner's residence served by Southwest Airlines. If the winner does not live in a city served by Southwest Airlines, he/she is responsible for transportation to the nearest airport served by Southwest Airlines. Seats on any desired flight are not guaranteed. Government issued ID required to travel. All other expenses, not specifically mentioned herein are the sole responsibility of the winners. No Substitutions, cash equivalents, or transfers of prize permitted.

4. Eligibility:  Contest open to all legal US residents of the 48 contiguous states and the District of Columbia, excluding Rhode Island, 21 years and older as of September 1, 2012.  Employees of Southwest Airlines, AirTran Airways, their advertising and promotions agencies, and their immediate families (spouse and parents, children and siblings and their spouses), and individuals living in the same households of such employees are ineligible.  Void where prohibited or restricted by law.  Sweepstakes subject to all applicable federal, state, and local laws and regulations.   Void in Puerto Rico and where prohibited by law.

By participating, you agree that the Sponsor, its parent, subsidiaries, and affiliates, and all of their respective officers, directors, employees, representatives and agents, will have no liability whatsoever for any liability resulting from any injury, loss, or damages of any kind to persons, including death, and property, due in whole or in part, directly or indirectly, from the acceptance, possession, use, or misuse of a prize or participation in this Sweepstakes. By entering, you agree that Sponsor, and those acting under its authority, may use your name, hometown, likeness and/or voice, and the comment (s) you submitted as an entry for advertising and promotional purposes in any media without limitation and without further consideration, unless prohibited by law.

6.  Limitation of Liability: Neither Sponsor, nor their affiliated entities, are responsible for printing or typographical errors in any related materials; stolen, fraudulent, entries or mail; or transactions that are processed or lost due to computer or electronic malfunction.  Winner is solely responsible for payment of all federal, state, and local taxes on prize and for any travel or other expenses not specifically mentioned in prize description.  Sponsor reserves the right to cancel or modify Sweepstakes if fraud or technical failure compromises the integrity of the Sweepstakes as determined by Sponsor in its sole discretion.  This Sweepstakes offer is being made exclusively by Sponsor.