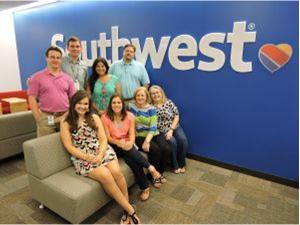 There’s an old saying, “Time flies when you’re having fun,” and while it does not specifically refer to the airline industry, it certainly seems true at Southwest Airlines!  Recently, I was privileged to spend some time with a group of Employees who came together to celebrate their Fifth SWAnniversary with the Company, and they enjoyed sharing some of the highlights of the chapters of their own Southwest stories. On July 6, 2010, one of the largest classes of Customer Relations New Hires walked through the front doors of Headquarters for the first time.  It was a collection of 18 people from a variety of backgrounds, excited to join the Family of the LUV Airline.  After an intense training curriculum designed to teach them our policies, our operating procedures, and the myriad of computer programs they would use on a daily basis, this hearty bunch began serving our Customers. Two of the Employees from that class remain in Customer Relations. Nancy Turnipseed is an example of growth within the Department.  After two years as a Phone Representative, Nancy was promoted to Senior Representative. In her fourth year, Nancy decided to step into a new role.  She accepted the position of Executive Assistant to Jim Ruppel, Vice President Customer Relations/Rapid Rewards.  By Jim’s own admission, Nancy keeps him organized and focused, and very ably administers all of the logistics of a Vice President’s office.  The other remaining CR Employee is Stephen Summers.  He was promoted from Phone Representative to Senior Representative in February 2012, and then to Team Lead two years later.  He enjoys his role as a Coach and mentor to CR Reps on his Team, and remembers his own time as an Intern with us and gives a big shout out to Greg Muccio of the People Department. As for the rest of the group, they’ve literally “scattered to the wind” over the last five years into various other Southwest roles. Brice Taylor advanced from Writing Representative to Writing Team Supervisor and then Operations Team Leader within his first two years.  By January 2013, Brice took a leap and moved to our Revenue Management Department where he has continued to earn new responsibilitie. Brice has served as Market Team Analyst, Yield; Market Team Senior Analyst, Yield; Senior Analyst, Operations Research; and currently as Manager, Operations Research. Many of the members began as CR Writers. Charity Murdoch spent more than two years as a writer before transitioning to a Multi-Channel Representative.  She was attracted in a different direction in 2013 when she moved to our Supply Chain Management Department to serve as an Administrative Coordinator, supporting her Department in general and two Directors specifically.  Deborah Roach moved over to the People Department in February 2013.  She now focuses on Internal Customers, and says she really enjoys assisting our Employees in dealing with medical benefit questions in the area of Health & Wellness. Another Writer alumna who departed CR in 2013 is Kayla Cermak.  She also joined the People Department, initially serving as a Coordinator before transitioning to the role of Recruiter as a part of our Campus Reach Team.  Kayla recruits Interns and new college graduates (especially from her beloved Texas A&M!) to work at Southwest Airlines. After serving our Customers as a Writer for several years, Neal Gorman returned to his roots and his passion when he transferred to our Finance Department.  He continues to serve our External Customers as a Member of the Sales and Refunds Services Team.  After a short stint as a Finance Associate II, Neal was promoted to Senior Finance Associate, where he works with his former Customer Relations Coworkers in providing refunds and vouchers to our Customers. Paige McKinley spent nearly a year as a Writer before moving to the Marketing Department.  In September 2011, she joined the Product Team to manage a variety of products available through southwest.com.  That role touched on merchandising, vendor communication, and revenue and reporting.  After three years, she slid over in her Department to the Distribution and Air Programs Team under the Corporate Sales group. There, Paige manages the Meetings program, the Groups product, and the block seat program. During her first two years in the Customer Relations Department, Tiffany Adams was simultaneously working on earning a Dispatch License.  Completing that goal allowed her to move into the position of Flight Information Agent in the OCC (the former Operations Coordination Center, now known as our NOC—Network Operations Control).  Tiffany learned much about our Operations there, and her exposure to the Dispatch Department led to her next change, when she was hired as a Dispatcher in June 2014. After delivering Positively Outrageous Service to our Customers through her written responses for a couple of years, Customer Relations Writer Tiffany Hedgemon had the chance to pursue her dream.  Now, she delivers that POS at 35,000 feet as a Flight Attendant.  As a Member of our Inflight Department, she is able to combine her background in CR with her natural people skills to provide the best possible onboard experience for hundreds of Customers per day! Each of the Employees in this Member Class have credited the training and their time spent in Customer Relations with preparing them for an exciting career at Southwest Airlines.  The foundations of Hospitality, empathy, and understanding they developed in CR have empowered each of them to grow as Employees and deepen the richness of their journey along their Southwest career.  From their common starting point, these Employees are continuing to contribute in a significant manner across the Company, and after five years, are definitely still Living the Southwest Way!  Who knows what they’ll be doing in another five years!
5 Loves