Taking delivery of a new aircraft is a “big deal.”  I’ve been fortunate to have traveled to Seattle to pick up two new aircraft, and for an avgeek like me, it is an exciting time.  Even if the aircraft is “just another 737-700,” that aircraft will remain “yours” as long as it is flying—my two are N436WN and N215WN.  For this edition of “Flashback Fridays,” we are going to turn the clock back to look at some delivery celebrations that took place during a time when we were taking delivery of new 737-200s. 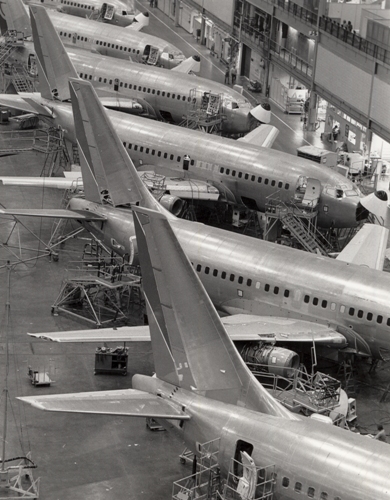 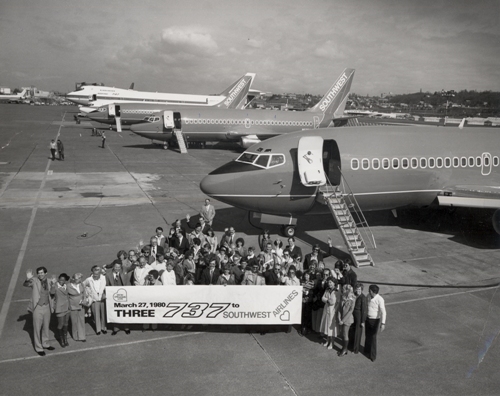 On March 27, 1980, there was a big celebration at Boeing Field as we took delivery of all three aircraft that day.  According to LUVLines (our Employee magazine), this was the first time in the history of the 737 program that Boeing had a triple delivery of 737s.  (The “delivery time” for the paperwork to be completed on all three aircraft was clocked at 20 minutes.)  Even today, for airlines with large order books like Southwest, it is rare to take delivery of two aircraft on the same day, much less three.  I count 58 Southwest Employees in the photo, including three Flight Attendants.  (Then President and CEO Howard Putnam is the fifth person from the right on the front row.)  The presence of three Flight Attendants in uniform indicates that all of the Employees probably flew on just one aircraft.  These aircraft quickly went to work for us when they operated our first service to Oklahoma City on April 1, Tulsa on April 2, and Albuquerque on April 3 of that year.  The photo presents a couple of other points of interest to aviation enthusiasts:  The airplane in the middle appears to be N62SW or N63SW, but my guess it’s N63SW, which would keep the symmetry intact.  (On a personal note, I flew on both N62SW and N63SW in the late 90s.). 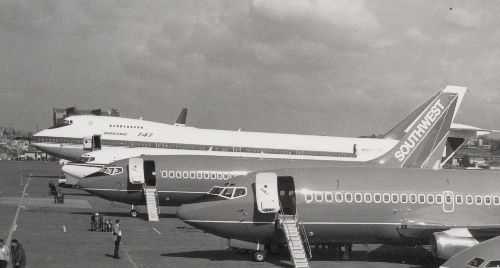 Immediately behind the last Southwest 737 is a brand new TWA 727-231, N84357.  And, just behind the TWA 727 is the very first 747, N7470, City of Everett.  (For the middle part of its life, N7470 wore the ten windows in the upper deck lounge, as seen here.  It is now on display at the Museum of Flight at Boeing Field with its original three-window upper deck.)  The decal between the lounge windows and the cockpit is a stylized “one,” signifying the first.  Just behind the hump of the 747’s lounge appears to be the tail of a British Airways 747. 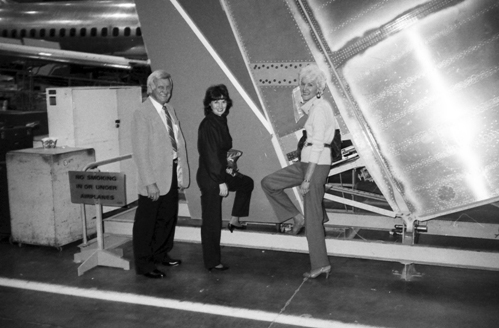 A couple of years later in 1982, the delivery flight of N91SW was part of a joint promotion between Southwest and Dallas radio station KVIL.  Claire Putnicki was the winner of KVIL’s “Captain for a Day” promotion.  As part of her prize, she and her husband toured the Boeing production line. 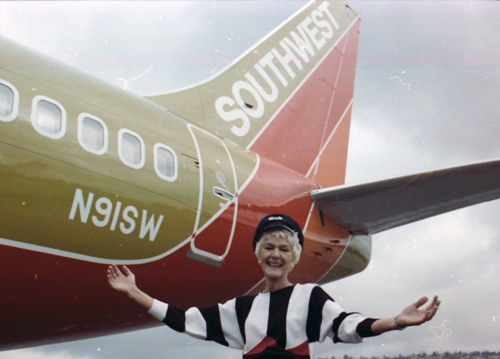 Then at the delivery center at Boeing Field, Claire poses next to “her airplane” before the delivery flight on December 13, 1982.   Incidentally, this airplane served with Southwest until September 13, 2005, when it went to the Mexican airline, Aerotropical, which used it for three years until it finally went to Mojave for storage in 2008.  Reportedly, the airframe is still intact. 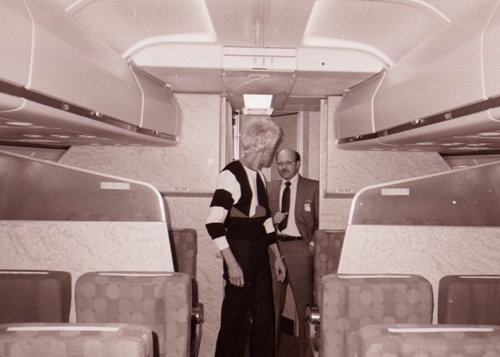 Claire then went upstairs into the cabin, and we see her in front of the aft galley.  Note that the airplane still has the original style seats with the spotted fabric that required paper headrests, but the enclosed overhead bins are now delivered from the factory.  In this seating configuration, the last two rows of seats are in the lounge configuration.  (I think the very last row only had two seats.) 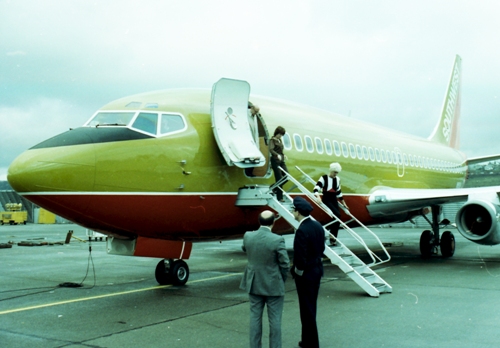 After the cabin tour, Claire walks down the front air stairs.  Even though aircraft numbers began showing up on the nose gear doors in late 1973, this photo and the earlier one of the triplets' delivery show that these numbers were applied once the aircraft joined our fleet. 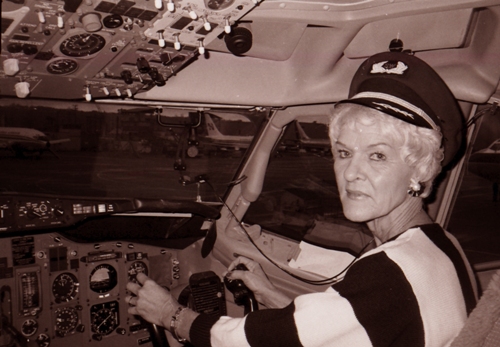 The final photo shows Claire posing in the First Officer’s seat before departure from Boeing Field.  Other brand new 737s are visible on the ramp outside the cockpit window, but I can’t make out their identity.  There really is nothing like that new airplane smell, and a delivery flight is a special time for both the aircraft and the Employees involved.

Update:  Michael Lombardi, the Boeing Corporate Historian tells me that the first 747 always had just three lounge windows to a side.  The extra "windows" were paint.