Flashback Fridays: A Photo Smorgasbord for Avgeeks and Other Interested Parties

Throughout the history of Southwest Airlines, most of our aircraft have come to us directly from the Boeing factory, but there have been times when “previously owned” aircraft have worn Southwest Airlines colors.  This has happened either during periods of rapid expansion when we acquired additional aircraft through leases or through the acquisition of another carrier like we did with Morris Air and are currently doing with AirTran.  It's been awhile since I "geeked out," and as a Flashback Fridays change of pace, I am concentrating on “hardware” this week to show what some of those leased and merger aircraft looked like before they joined Southwest.  These “before” photographs were taken by our Maintenance & Engineering folks as part of their inspections to determine these airplanes' suitability for our needs.  As we will see, some of these airplanes have a long (and to an avgeek, an exotic) list of previous users. 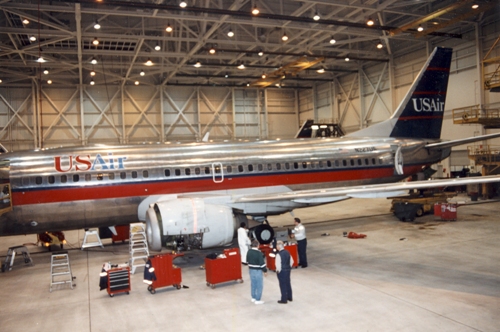 Let’s order this brief review based on each airplane’s registration (sometimes called “N” number) that was worn in Southwest service.  Our first example is N662SW, shown at the end of its time with US Air as N227US.  This aircraft, serial number 23255, is a 737-3Q8, and it began life with the Las Vegas-based Sunworld Airlines on lease from ILFC (a major aircraft leasing company) as N841L.  After two years, it went to Piedmont as N399P.  When US Air acquired Piedmont in 1989, it received the registration shown in the photo. 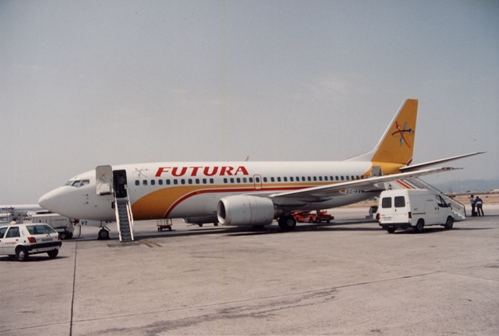 Our next example wears N664WN with Southwest, and it really has an exotic history.  Built as a 737-3Y0, serial number 23495, it alternated between Europe and Canada during the first three years of its life.  The Boeing customer code of "Y0" was assigned to the Guinness Peat Aviation (GPA) leasing company in Ireland.  Beginning service as G-DHSW with the British charter airline, Monarch, it would fly Brits to the Mediterranean in the winter, and it served Canadians during the summer on a sublease to Pacific Western and then its successor, Canadian Airlines, as C-FPWD.  In the summer of 1989, a sublease took it to Central America instead of Canada for Guatemala’s Aviateca (with its British registration).  In 1990, another sublease placed it for a short period with Euroberlin.  When the Monarch lease expired in 1994, this airplane served for a few months as EC-FVT with the Spanish charter airline, Futura, as shown above, before coming to Southwest. 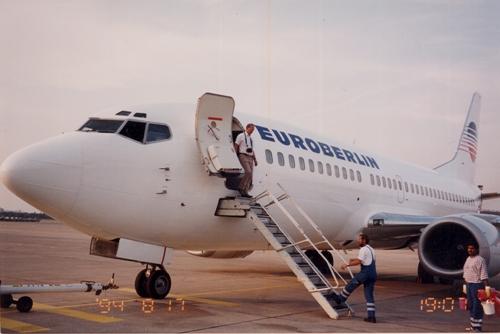 N665WN is a sister ship to the previous example.  Also a 737-3Y0, this aircraft (serial number 23497) led an almost identical early life to N664WN.  It carried the British registration of G-MONF while with Monarch and on sublease to some other European airlines, and it operated as C-FPWE while on sublease in Canada.  The only difference is that N665WN spent three years with Euroberlin (as G-MONF), in whose livery it is shown above, on lease after its Monarch lease expired. The man with the camera around his neck at the top of the stairs may be one of our Maintenance & Engineering Employees. The photo above and the two below were taken on August 17, 2004 in the evening. 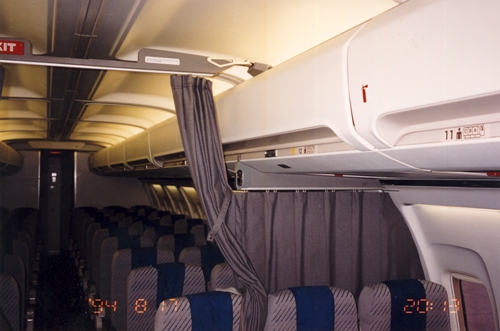 We have two interior views of N665WN with the basic Monarch/Euroberlin interior.  This is a view looking aft from the front of the main cabin.  The curtain looks as though it is movable. 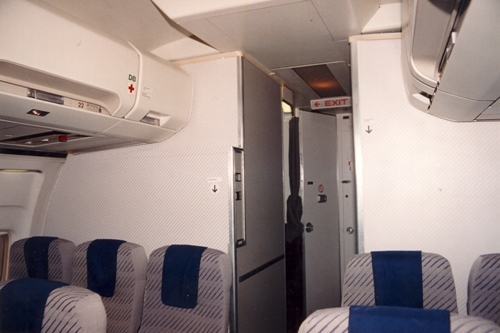 Next is a view of the aft galley and lavatories.  This aircraft has two aft lavs (Southwest -300s have one aft lav), but the galley sits farther forward to compensate for the extra lav. 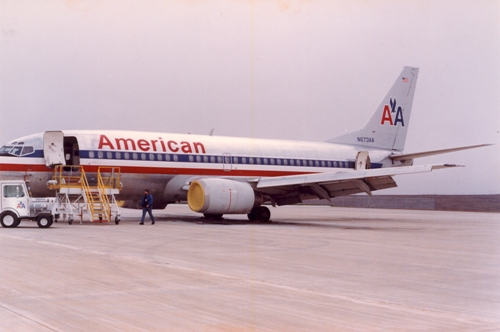 N673AA has met its fate at the scrapyard.  This aircraft, a 737-3A4 (serial number 23251), was delivered new to Air Cal as N307AC in 1984.  When that former intrastate carrier merged with American in 1987, the aircraft assumed a transition livery before receiving American’s bare-metal livery and the registration, N673AA.  Southwest acquired the aircraft on lease in 1992, and somewhat surprisingly, continued to use the “AA” registration until the lease expired. 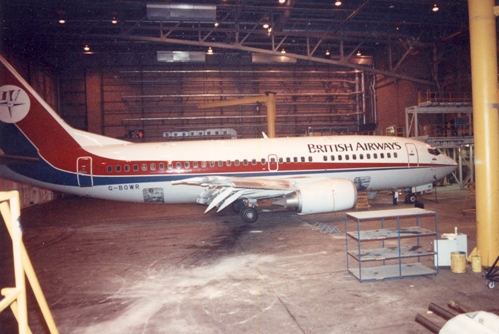 Like N662SW, N685SW is also a 737-3Q8 (serial number 23401), which indicates it was built for the giant leasing firm, ILFC. ("Y8" is Boeing's customer code for ILFC.) Air Belgium was the first operator and used the registration OO-ILF.  After a couple of years, the aircraft moved across the English Channel as G-BOWR to serve with Orion Airways, Britannia Airways, and Dan-Air London.  When British Airways acquired Dan-Air, they applied their titles to the basic Dan-Air livery above.  The aircraft came back home to its country of birth to serve with Southwest as N662SW. 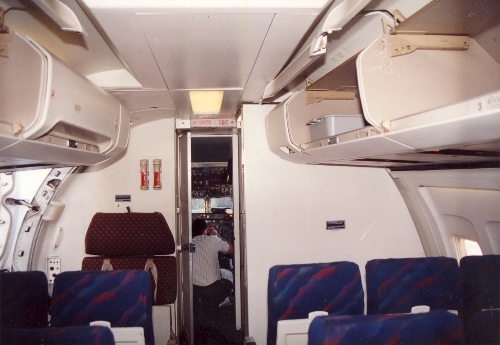 We close with this interior shot of N699SW, and like many of the other examples we have looked at, this airplane also had a varied early career.  Built as a 737-3Y0 (serial number 23826) for GPA, it began its career in South America with the Brazilian airline, VASP.  It also served time in Europe with Air Europa.  In 1993, it went to Morris Air, while wearing the Irish registration EI-CHE.  In the merger with Southwest, it was reregistered as N699SW.  This view of the Morris Air interior looking forward toward the cockpit shows that the aircraft lacked a wind screen separating the cabin from the forward entry way.  This aircraft was been returned to the leasing company.

All of these aircraft received the standard Southwest livery and interiors, and given that most of these previous operators have ceased to exist, it is virtually impossible to recreate these shots today.  These unremarked photos from Maintenance and Engineering not only document the pre-Southwest history of these aircraft, they document a period when small charter operators sprang up all across the world.  I know this installment might have been too “geeky” for some of you, and I hope you will return next week for some unique publicity photos.