When Southwest began flying on June 18, 1971, we operated out of Houston Intercontinental (IAH). Southwest reopened Hobby to commercial service a few months later on November 14, and we used the occasion to complete the “Texas Triangle" by beginning service between Hobby and San Antonio.  (We operated from both Houston airports until May 14, 1972, when we we discontinued IAH service.)  Dan Johnson in Dispatch sent me some candid photos (most of them in color) that were taken when he worked at Houston’s Hobby Airport.  As an Original Employee, Dan was there at the birth of the ten-minute turn and for our early Hobby service. Let's use this earlier photo from the archives to set the stage for Dan's pictures.  Rather than reopen the main terminal for a relatively small number of daily flights, we (and later Braniff) operated out of the old International Building that had been used by Pan American and KLM back when Hobby was the city’s main airport.  The International Building was built to the left of the main terminal after this late 1950s photo was taken. 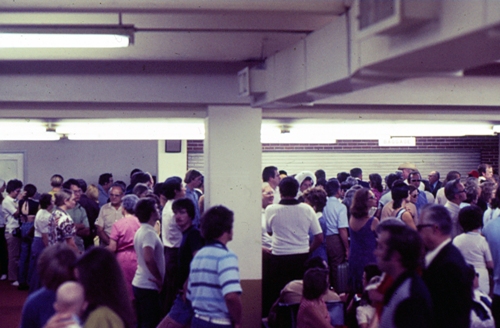 Dan’s first picture shows the flight-time confusion during a mid-week afternoon.  We see arriving Customers, many of whom are waiting for their bags at the claim area against the far wall, where the bricks are tan color.  Others are trying to negotiate the crowd to leave the building.  Still others in the photo are greeting arriving Customers.  Mixed in this group are outbound Customers waiting to check in and go through the security magnetometer.  According to Dan, there could be double or triple this number of people in the room on a Thursday, Friday, or Sunday evening. 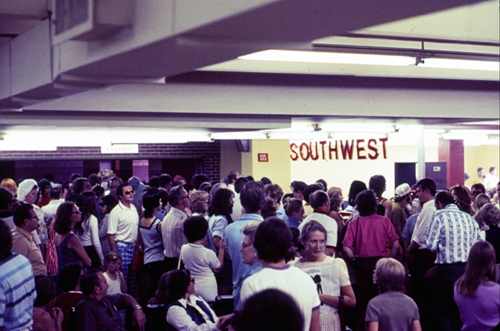 This slightly different view shows us the “goal” of the outbound Customers.  The checkin desks were located under the Southwest sign hanging from the ceiling.  The actual ticket counter was to the right out of the picture.  Hopefully the air conditioning was working because the absence of coats tells us that this was probably summertime.  We can only guess what this mass of people could do to the climate of the room. 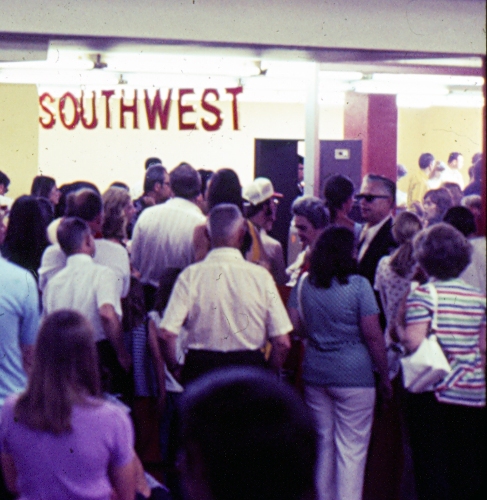 The magnetometer for the gate hold area is visible just to the right of the “T” in Southwest.  Once cleared through security, folks would wait to board in the room with the yellow walls. 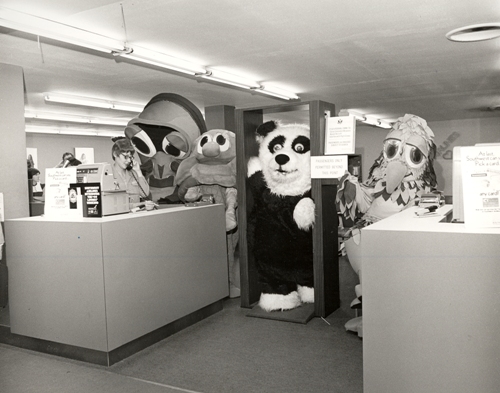 Compare this archive view with Dan’s to see what the checkin area looked like without all the people and only inhabited by some scary characters from the Houston children’s store, Kid’s Kountry. 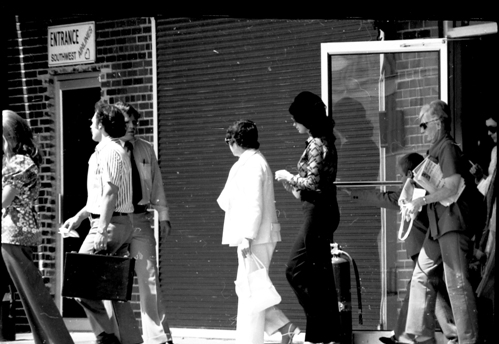 Dan gives us this black and white view of what the scene was like from rampside, once Customers negotiated the crowds inside the building and made it outside to board their aircraft.  He tells me that the man in the tie watching the folks making their way to the aircraft is Dennis Lardon, the Assistant Station Manager at the time.  Note the fire extinguisher being used as a door stop to hold the door open and the total lack of carryon luggage.  The largest item I see is a briefcase carried by the man in front of Dennis. This temporary facility was rudimentary at best, and it was utilized until December 8, 1974, when we moved our operations into the main building. 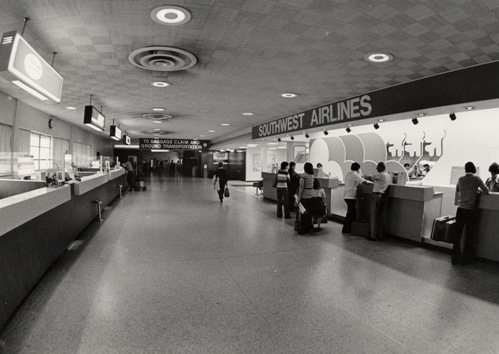 The main terminal, shown above in another archives photo, gave us room to grow, in addition to separating the ticket counter, gates, and baggage claim into different areas.  Starting in 2006, a massive rebuilding project began that would turn the Hobby Terminal into a functional, modern facility.  We are about to come full circle in Southwest’s occupancy of the airport.  We began Hobby service in the former International Building, and we are in the process of building a new modern international terminal that will allow us to add international destinations to the many domestic cities we serve from Hobby.