It’s no secret that Southwest LUVs to celebrate holidays, especially Valentine’s Day and Halloween.  It’s a longtime tradition, but just how deep are those roots?  As these documents and photos from the archives show, our association with Valentine’s Day goes all the way back to our very beginnings.  I recently found documents recapping both our very first Valentine’s Day, February 14, 1972, and outlining the events planned (many of them the same as in 1972) for Valentine’s Day in 1973.  The cover document proclaims the plan to be “Valentine’s at the Love Airline,” and it is subtitled “Kisses from ‘The Somebody Else Up There Who Loves You’.”  Note that the word “Love” and not “LUV” is used—a definite play on Love Field. 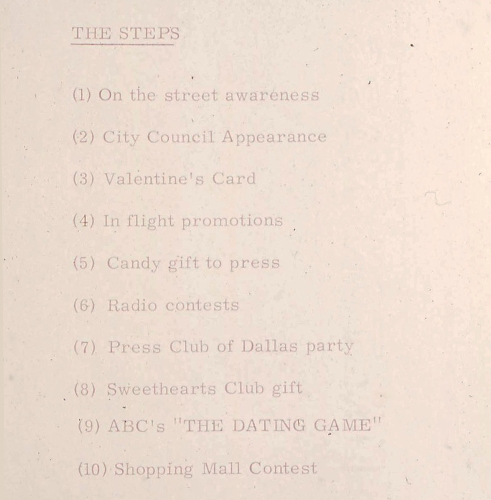 The plan consists of the ten steps outlined above, and we have some photos that will help illustrate some of these steps. 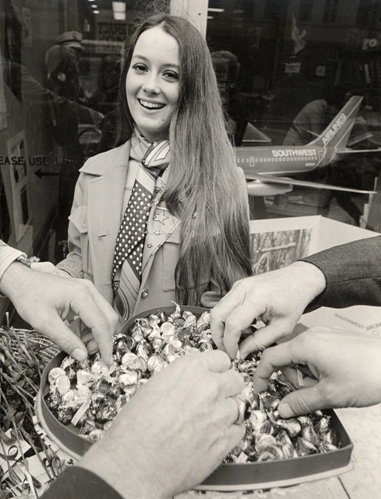 For example, step one for 1973 calls for “on the street awareness.”  This part of the plan called for Flight Attendants in hot pants to give our candy kisses “to passersby from a red square container decorated with Southwest hearts” in downtown Dallas.  Judging from the 1972 picture, the plan appears to have been modified from when a model of a Southwest aircraft was displayed in a store window as our Employee handed out candy on the street.  The 1973 plan also called for Flight Attendants to visit local media outlets to distribute candy. 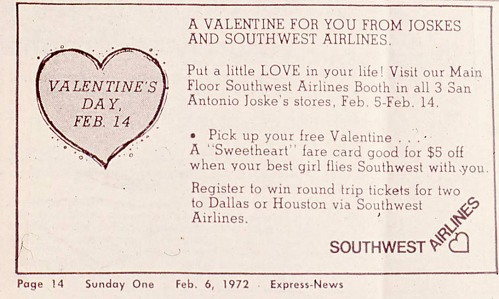 For the 1972 event, Southwest teamed up with Joske’s Department Store in San Antonio.  Maybe even more so than the airline industry, the department store industry has undergone major consolidation.  This San Antonio-based retailer became a part of Dillard’s in 1987.  Southwest sponsored a contest that gave away roundtrip tickets to either Dallas or Houston for two.  In addition, as the 1972 newspaper ad (above) points out, people could pick up a free Valentine “Sweetheart” fare card good for a $5 discount “when your best girl flies Southwest with you.”  The brand new Town East Mall in Mesquite would replace Joske's for 1973. 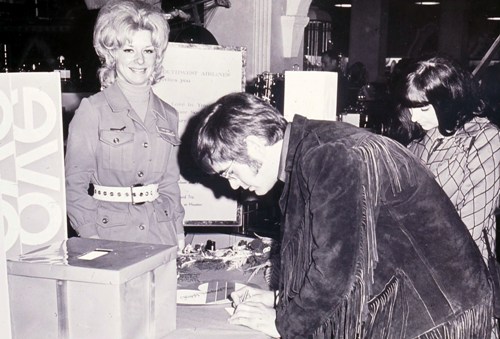 This was the signup desk located inside Joske’s downtown San Antonio store, and it appears to have been a popular place.  The desk was staffed by San Antonio Ticket Agents, and if you didn’t know the photo was taken in 1972, the iconic, early 1970s sideburns and leather fringe jacket would identify the date just as surely as a calendar.  On the table next to the man’s hands is a Valentine’s heart with our original three stripes superimposed on it. 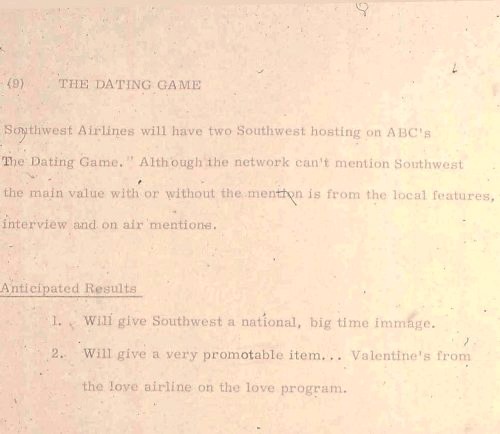 Not all of the Valentine’s Day festivities were based in Texas.  For 1973, Southwest wanted to get a big national “splash” by having two of our Flight Attendants appear on ABC’s The Dating Game.  For those of you who don’t know, the premise of the show was that a bachelor or “bachelorette” would interview three potential dates sitting on stage but out of view behind a screen.  Once the date was selected, the two “losers” would come around the partition to reveal themselves, and then the lucky “winner” would get to meet his or her date.  The show would send the winners to a Los Angeles "hot spot" on a chaperoned date, and after that, the individuals were on their own if they wanted to continue seeing each other.  Ironically, as the document above outlines, neither the show nor our Employees could mention Southwest’s name during the episode.  The plan to generate what we now call “brand awareness” about our Employees' role in the show was based on feature stories about their participation. 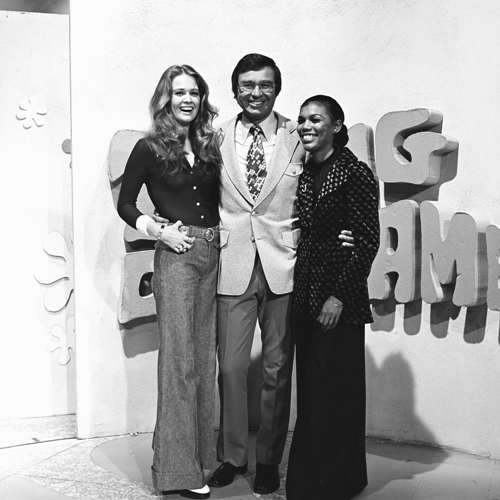 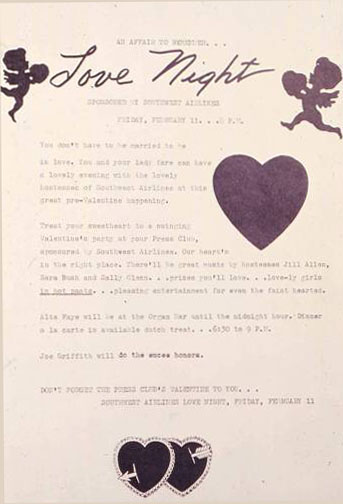 Southwest also sponsored a Valentine’s dance at the Press Club of Dallas, which is outlined in the club’s newsletter for 1972’s event.  In addition, on Valentine’s Day, Flight Attendants decorated the cabins of the aircraft with hearts, and they also visited the city councils of Dallas, Houston, and San Antonio; the local television and radio stations; and the main newspapers.

The two other components of the 1973 celebration involved holding a contest on Dallas radio station KIXL, and giving the secretaries in the “Southwest Sweethearts Club” a heart-shaped candy dish filled with candy to thank them for booking their bosses travel.  (Business travel was very different back then.)  It was exciting to find these landmark documents that outline our earliest plans to have Southwest Employees celebrate holidays with our Customers, and the birth of this longtime Southwest tradition is outlined in these documents and photos.