After 88 Southwest flights, 62 airports, and dozens of jokes, Actor/Comedian Owen Benjamin landed in Raleigh-Durham yesterday to officially break the RecordSetter world record for the most unique airports visited in 30 days.  Funny on the Fly took off in Dallas on November 21, and Southwest Customers and Employees across our system have had the chance to experience nonstop laughs with Owen during his record-breaking quest.

Throughout Owen’s journey, he racked up 232, 416 Rapid Rewards points.  Those points could take you from Phoenix to Paris (not Texas!) and on a trip from Cancun to D.C.—there are so many other possibilities!  You still have a chance to be the lucky winner of Owen’s points through the end of the year, so be sure to visit flyingfunny.com to enter for your chance to win.  The lucky winner of Owen’s Rapid Rewards points will be announced after the New Year.  And, today, we’ll be giving away a roundtrip ticket on Southwest AND a Lenovo ThinkPad Tablet on flyingfunny.com—don’t miss out! 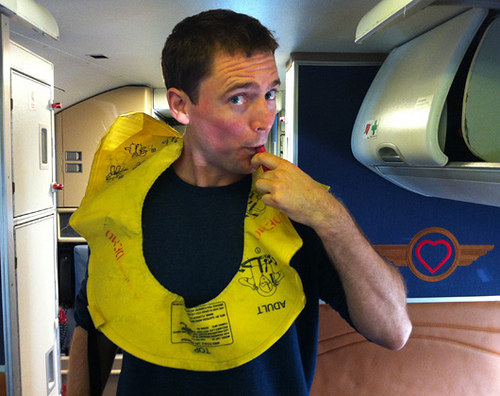 Owen brought the funny over the last month, but many Southwest Flight Attendants make me giggle, too.  What’s your favorite Southwest inflight joke?  Let us know by commenting below!